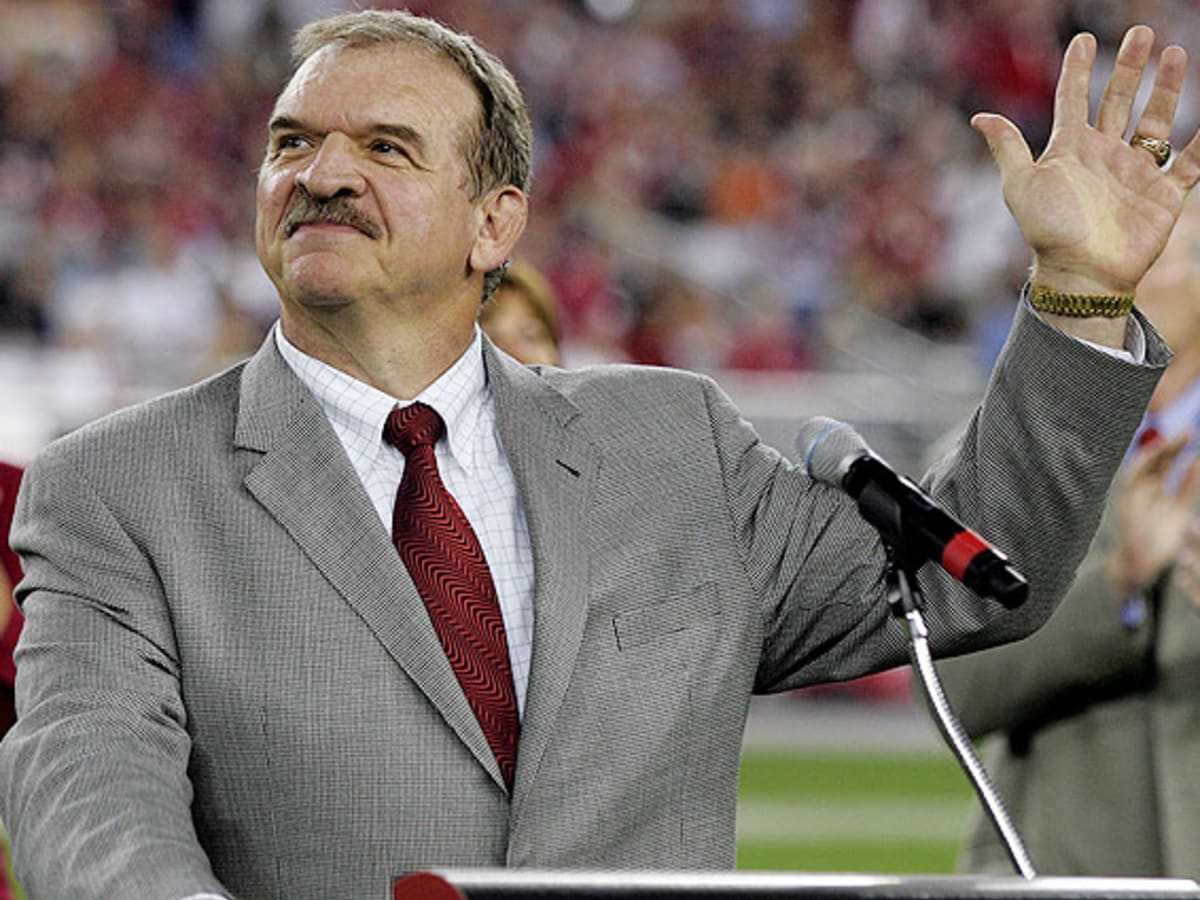 Daniel Lee Dierdorf was born in Canton, Ohio–home of the Pro Football Hall of Fame–on this date in 1949. His father John worked for Canton-based Hoover vacuum company. Dierdorf attended Glenwood High School, alma mater of Brian Hugh Warner, who later found fame as goth-rocker Marilyn Manson. In 1967, he accepted a football scholarship to what Ohioans refer to as “that school up north”–the University of Michigan. Following Dierdorf’s sophomore year, Bo Schembechler [Daily Dose, April 1] was named Michigan’s head football coach. After 65 players quit the 140-man squad, Schembechler promised, “those that stay will be champions.” The coach was right, as the Wolverines won the Big Ten title in Schembechler’s first season. In 1970, Dierdorf was named consensus All-America and played in the Hula Bowl, East-West Shrine Game and College All-Star Game In three seasons in Ann Arbor, Dierdorf was twice named All-League and his teams went 25-6. Following graduation, the St. Louis [now Arizona] Cardinals selected him in the second round of the 1971 NFL Draft with the 43rd overall pick.

After dividing time between guard and tackle in his first two seasons, Dan Dierdorf became the Cardinals’ permanent right tackle in 1973. Unlike most positions in football, there are few statistics to measure the performance of offensive lineman. When they do their job, it goes unnoticed by most. When they fail, the entire audience sees the result of their error. Dan Dierdorf rarely failed. He played 160 games in 13 seasons, spending the 1982 at center after the Cardinals starter went down to injury. Tougher than nails, Dierdorf broke his jaw in 1977, only to return two weeks later. “I lost 55 pounds in six weeks. It’s amazing how much weight you can lose when you can’t eat.” He suffered a catastrophic knee injury during an extra point play in 1979 and was never the same player, eventually retiring as a result. Playing on the paper-thin artificial turf of Busch Stadium for 13 autumns took a toll on his body and he moved into broadcasting after retiring as a player in 1983. Four years later, Dan Dierdorf joined Al Michaels and Frank Gifford as part of the Monday Night Football team, a position he held through 1998. He also called boxing and covered the 1988 Winter Olympics from Calgary for ABC. In 1999, he returned to CBS, where he had begun his career, covering NFL games until his retirement in 2013. The following year, he joined Jim Brandstatter, his backup at Michigan, doing Wolverines football on radio. After having attended only a half-dozen UM games since graduating in 1970, Dierdorf arrived hours early for his first telecast from Michigan Stadium. “He didn’t say a word, just took it all in—he was enraptured,” recalled Brandstatter.

When Dan Dierdorf was twelve years old, he and his father John witnessed the groundbreaking at the Pro Football Hall of Fame, located one mile from his boyhood home. He never missed an induction ceremony until he left for Ann Arbor to play football for Michigan. In 1996, he came home again to receive the NFL’s highest honor. The audience included Glenwood High School classmates—150 strong—along with his high school coach Jim Reichenbaugh, Schembechler, and a dozen Cardinals teammates, but did not include John Dierdorf, who died in 1981. “This is my 20th enshrinement ceremony at the Pro Football Hall of Fame. The view up here is better than the first 19.” Dan Dierdorf was the face of the St. Louis Cardinals in the 1970s. He was equally effective as both a pass and run blocker and anchored an offensive line that allowed the fewest sacks in the NFC for five straight years. In 1975, the Cardinals set an NFL record by allowing the fewest sacks [eight] in a season and Dierdorf did not allow a sack for two full seasons. Mr. Dierdorf was named All-Pro five times, played in six Pro Bowls and was named best overall blocker in the NFL for three straight years, from 1976-78. At 6’3”, 280 pounds, he combined size, speed, quickness, discipline, intelligence and consistency to become one of the best right offensive tackles ever to play the game and was named to the NFL 1970s All-Decade Team. Dierdorf spent 12 seasons covering Monday Night Football, a longer prime-time stay on network television than Jerry Seinfeld, Lucy or Archie Bunker. In 2013, he retired from network broadcasting after 29 seasons due to his inability to travel, having had both knees and hips replaced in his post-playing days. Daniel Lee Dierdorf is a member of both the college and pro football Halls of Fame, received the Pete Rozelle Radio-Television Award in 2008 and was inducted into the University of Michigan Athletic Hall of Honor in 1996.

“I look at the first couple of plays as being of extra importance. In those first few plays, I try to remove any thought my opponent might have had that this was gonna be his day.”