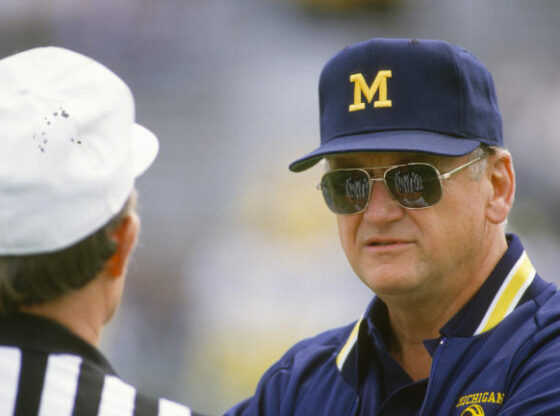 The University of Michigan has won more college football games than any team in history and Glenn Edward Schembechler, Jr. earned more victories than any man ever to coach the Wolverines.

Born in Barberton, Ohio—the “Magic City,” adjacent to Akron—on this date in 1929, his nickname “Bo” came from his sister’s attempts to say “brother” when they were young children.  The son of a firefighter, hard work and integrity became the two themes of Schembechler’s career.  He attended Miami University—the tenth oldest public university in the United States—in Oxford, Ohio, where he played tackle for the Redskins [now Redhawks].  Schembechler’s first coach, Sid Gillman, was an offensive innovator who developed a passing game that become the foundation for the modern West Coast Offense.  Prior to Schembechler’s senior season, Gillman left and was replaced by Woody Hayes, a fiery, run-oriented coach that demanded tough, physical play from his lineman.  Upon graduation from Miami in 1951, Schembechler worked as a graduate assistant under Hayes, who had taken the head coaching position at Ohio State, while earning his master’s degree.  After a tour of duty in the U.S. Army, Schembechler joined former Miami teammate Ara Parseghian, who had been hired as head coach at Northwestern, as a defensive assistant in 1956.  Two years later, Bo returned to Ohio State, becoming one of Hayes’ most trusted assistants while forging a lifelong friendship.  In 1963, Schembechler was named head coach of his alma mater, leading the Redskins to a 40-17-3 record and a pair of MAC titles during his six seasons in Oxford.

In 1968, Michigan was coming off its sixth losing season in eleven years and Wolverines athletic director Don Canham invited Glenn Schembechler to Ann Arbor for an interview.  After 15 minutes, Canham “sensed the intensity, the enthusiasm of a man destined to be a winner” and hired Schembechler as the 15th coach in Michigan history.  Prior to his first season, 65 of 140 players quit the football team, prompting Schembecher to proclaim, “those that stay will be champions.”  That year, Schembechler guided the Wolverines to a 7-2 record heading into a season-ending showdown with Ohio State to determine the Big Ten title and a berth in the Rose Bowl.  It was the start of “The Ten Year War”–a decade-long feud between Schembechler and Hayes to determine the conference champion.  The Buckeyes traveled to Ann Arbor as defending national champions, winners of 22 games in a row and as 17-point favorites.  Over 103,000 fans packed Michigan Stadium to see one of the biggest upsets in college football history, as Michigan downed OSU, 24-12, to earn a trip to Pasadena and resurrect UM’s program.  The 1969 game is considered the most important win in Michigan football history.  During the Ten Year War, UM and OSU won or shared the Big Ten title every season, with Schembechler going 5-4-1 against his mentor.  According to Earle Bruce, who succeeded Hayes at Ohio State, “it was a very personal rivalry.  And for the first and only time, it was as much about the coaches as it was the game.”  Schembechler was an intense disciplinarian with a gruff persona who was devoted to his players.  “Football is the American game that typifies the old American spirit.  It’s physical.  It’s hard work.  It’s kind of a swashbuckling American sport.”

Glenn Schembechler compiled a career record of 234-65-8 as a head football coach.  He never had a losing season and only Joe Paterno and Tom Osborne have recorded 200 victories in fewer games.  In 21 seasons at Michigan, he went 194-48-5, won or shared in 13 Big Ten titles, and finished in the top ten in the nation 13 times.  Under Schembechler, the Wolverines had a regular-season winning percentage of .796.  Michigan went to bowl games 17 times in Bo’s 21 seasons, going a disappointing 5-12, including 2-8 in the Rose Bowl.  Mr. Schembechler was named Big Ten Coach of the Year seven times and was National Coach of the Year in 1969, 1977 and 1985.  After suffering heart attacks [in 1970, while in Pasadena for the Rose Bowl] and again in 1987, Schembechler moved from the sidelines to the office, serving as UM athletic director from 1988-90.  On the eve of the NCAA tournament in March 1989, Wolverines basketball coach Bill Frieder announced he was taking the head coaching position at Arizona State, effective the end of the season.  Schembechler immediately fired Frieder, replacing him with assistant coach Steve Fisher on an interim basis, famously announcing, “a Michigan man is going to coach the Michigan team” in the NCAA tournament.  Fisher led the Wolverines to the NCAA championship and was hired permanently.  Schembechler served as president of the Detroit Tigers from 1990-1992 before returning to UM in an administrative role.  On November 17, 2006, on the eve of the one of the biggest games in the history of the Ohio State-Michigan rivalry, Mr. Schembechler died just prior to taping his weekly studio show, Big Ten Ticket.  He was 77 years old.

“I’m not sure he has gotten his due as far as being one of the truly great football coaches of all time.”