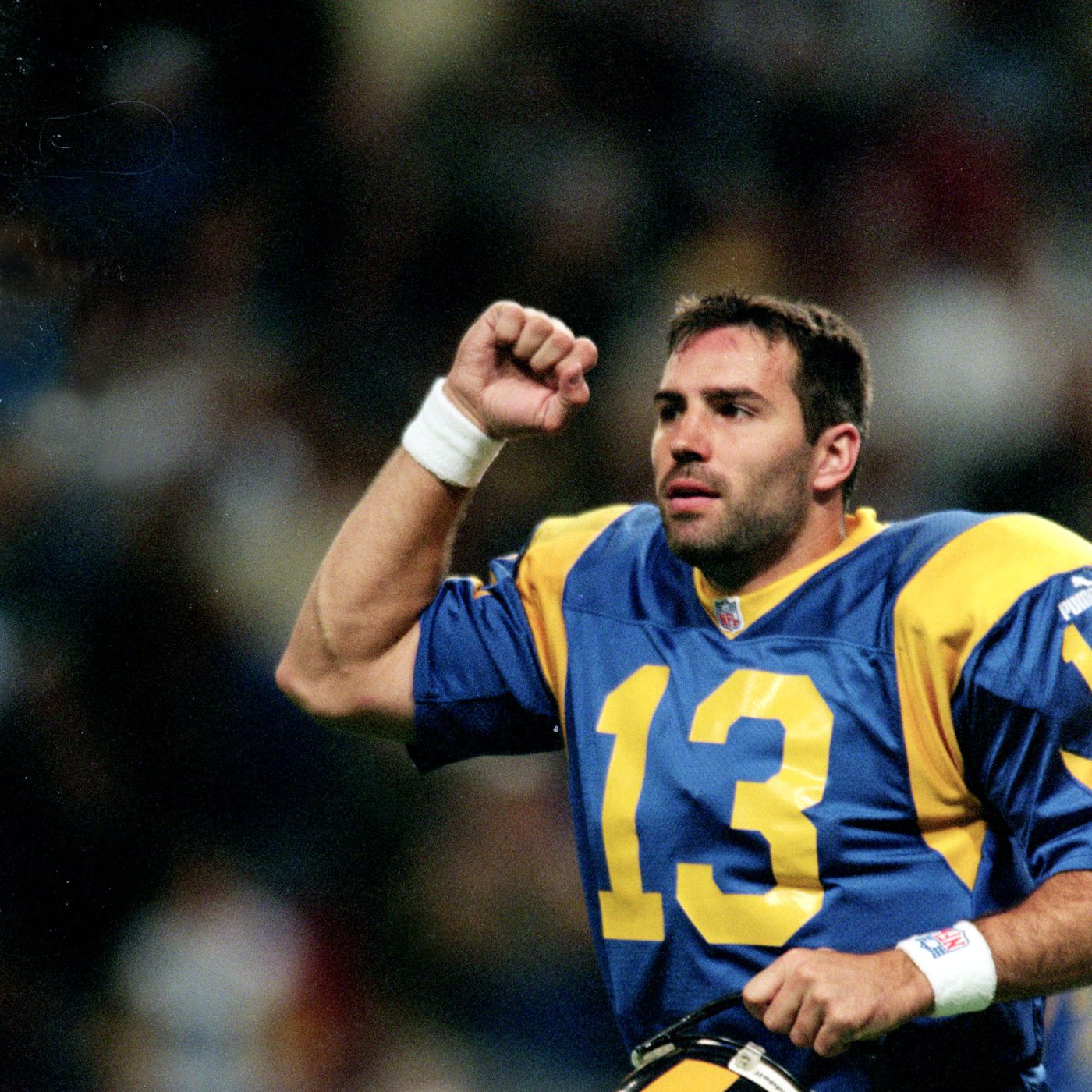 Kurtis Eugene Warner deserves a spot in the Pro Football Hall of Fame.

Born in Burlington, Iowa, on this date in 1971, he was the younger of Gene and Sue Warner’s two sons. Warner’s parents divorced when he was six, and the boys moved to Cedar Rapids—“The City of Five Seasons”–with their mother, who remarried briefly. Warner attended Regis High School, alma mater of 2007 Masters champion Zach Johnson, where he was a standout in football, baseball and basketball. Warner earned the starting quarterback position as a junior, and was so intelligent that he was allowed to call most of his own plays. As a senior, he earned a spot in the Shrine Bowl, a showcase for the best high school football talent in Iowa, and was named the game’s MVP. With no Division I scholarship offers looming, Warner enrolled at Northern Iowa University, a Division I-AA school in Cedar Falls. After redshirting as a freshman, Warner sat on the bench for three years. He became the starting quarterback in the fall of 1993, leading the Panthers to an 8-3 mark and a playoff berth. Following his senior season, Warner was named the Gateway [now Missouri Valley] Conference Offensive Player of the Year. Despite a successful senior campaign, professional football teams were not beating down the door looking for a one-year starter from Northern Iowa. Undrafted, he was invited to Green Bay Packers’ training camp, but was cut after five weeks. With no Canadian League [Daily Dose, December 14] or NFL Europe team interested, Warner returned to Cedar Falls. Trying to keep his football hopes alive, Warner worked out for three hours a day before reporting for his night shifts at the Hy-Vee Supermarket, stocking shelves and sweeping floors for $ 5.50 an hour.

In 1995, the Arena Football League expanded, adding a franchise in Des Moines. Kurt Warner gave his manager at Hy-Vee two weeks’ notice before joining the Iowa Barnstormers and earning $ 1,000 per game. He set passing records, was twice named first-team All-Arena and led the Barnstormers to two title game [Arena Bowl] appearances in his first three years. In 1998, the St. Louis Rams took notice, signed him to a contract, and sent Warner to NFL-Europe, to gain seasoning playing for the Amsterdam Admirals. After leading the Euro league in passing yards and touchdowns in 1998, the Rams invited Warner to camp that summer, where he landed the third-string job. He rose to back-up the following year and, when starting quarterback Trent Green tore an ACL in a preseason game, became St. Louis’ starter. Warner directed the Rams’ high-powered offense—called “The Greatest Show on Turf”—to a 13-3 record. The former stock boy was named NFL MVP and led the Rams to the franchise’s first Super Bowl victory, saying, “people think this season is the first time I have touched a football; they don’t realize I’ve been doing this for years, just not on this level, because I never got the chance.” On the game’s biggest stage, Warner was brilliant, throwing for a Super Bowl record 414 yards and two touchdowns to earn MVP honors. “There is no way to quantify Warner’s commanding pocket presence, wrote Sports Illustrated. “His ability to release the ball just before the rush arrives or the amazing array of passes he can throw with chilling accuracy.”

Warner led the Rams to another Super Bowl in 2001, a season in which he was again named league MVP. After losing to New England, 20-17, in the final game of Pat Summerall’s [Daily Dose, December 14] brilliant broadcasting career, the Rams lost steam, and Warner was released. Following one disappointing year with the New York Giants, he was signed by the Arizona Cardinals in 2005. Over the ensuing three seasons, he shared the starting role with Josh McCown and Matt Leinart before seizing the reigns at the start of the 2008 campaign. Mr. Warner led the Cardinals to the NFC West title, their first playoff win since 1947 and the franchise’s first Super Bowl, where they lost to the Pittsburgh Steelers, 27-23. Kurt Warner became the third quarterback in NFL history to make a Super Bowl start with two different teams and to lead two different clubs to conference championships. He continued to be productive, but suffered two concussions during the 2009 season, leading to his retirement in January 2010.

Kurt Eugene Warner and Fran Tarkenton are the only two quarterbacks in NFL history to throw for at least 100 touchdowns for two different teams. He was twice named league MVP, owns the three highest single-game passing yardage totals in Super Bowl history, and was MVP of Super Bowl XXXIV. Warner is the third most accurate passer in NFL history, with a 65.5 percent completion rate and holds the seventh-highest career passer rating of all time. Mr. Warner was especially good in the post-season, ranking first in completion percentage, first in yards per attempt and second in passer rating. Kurt Warner played 124 games in 12 NFL seasons, throwing for over 32,000 yards and 200 touchdowns. He played in four Pro Bowls. Warner is a member of the Arena League and St. Louis Sports Halls of Fame, is a member of the Arizona Cardinals’ Ring of Honor, and was the recipient of the Bart Starr Award, given for outstanding character and leadership in the home, on the field, and in the community. “We have never given this award to anyone more deserving,” said the former Packers Hall of Fame quarterback upon presenting the award in 2010. In one of the greatest rags-to-riches stories in football history, Kurt Warner went from the Hy-Vee to the Super Bowl, with stops in the Arena League and NFL Europe in between. The next logical destination is Canton.

“That’s why my story resonates with so many people. Because that’s what real life is.”