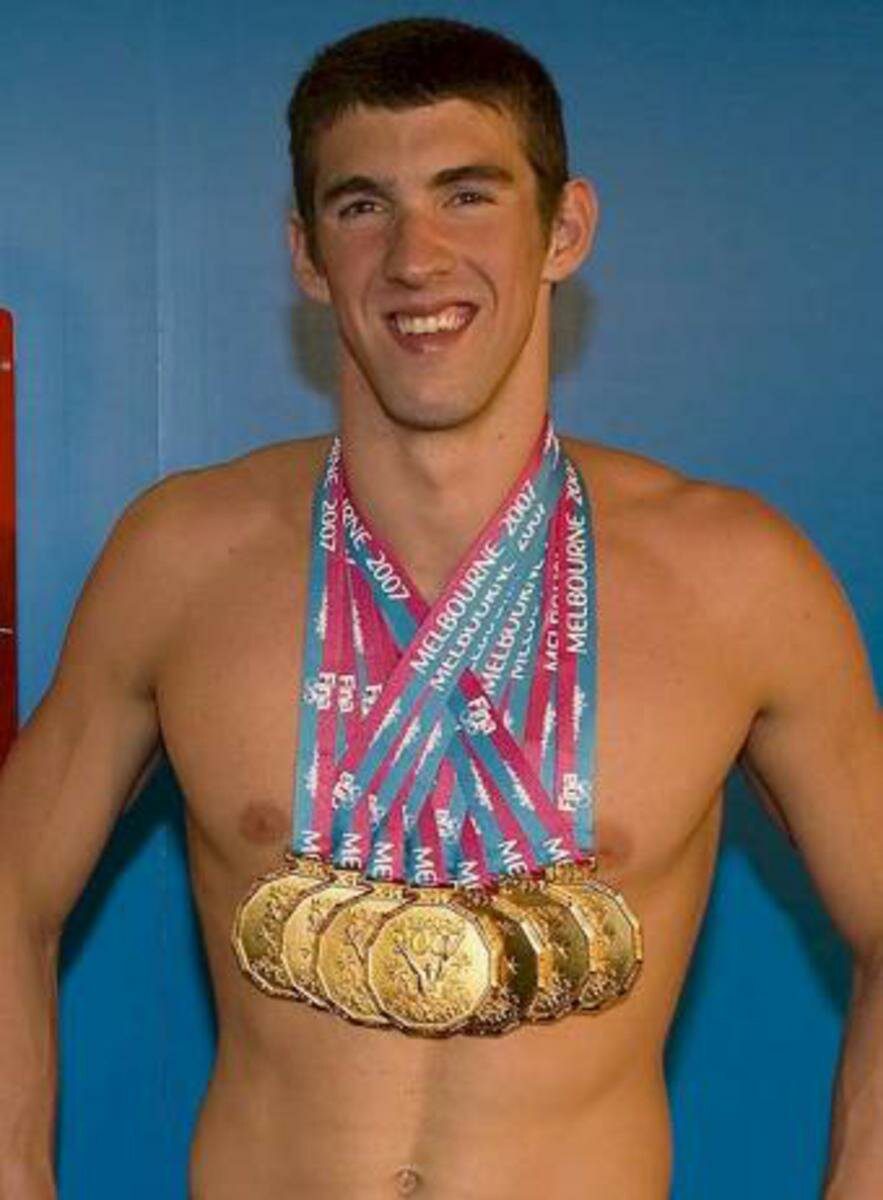 Happy 31st birthday to the most decorated Olympian of all time. Michael Fred Phelps II was born in Baltimore, Maryland, on this date in 1985, as the youngest of Fred and Debbie’s three children.  The family lived in the Rodgers Forge neighborhood in Towson, boyhood home of NFL legend John Unitas.  Fred Phelps was a Maryland state trooper and former college football player who earned a tryout with the Washington Redskins in the 1970s.  Debbie was a middle school principal.  The Phelps children all swam.  Hilary, the oldest, competed for the University of Richmond, where she set three school swim records.  Whitney was ranked third in the world at 14, when she competed in the 1996 Olympic Trials in Indianapolis, and was Freshman of the Year at UNLV.  Fred and Debbie divorced when Michael was nine, leading him to channel his energies into swimming.  By eleven, he held a national age group record.  In 1996, he met his mentor, Bob Bowman.  Bowman, a child psychology major and former swimmer at Florida State University, inherited an immense talent with terrible form.  Phelps trained at the Meadowbrook Aquatic and Fitness Center two times a day, six days a week under Bowman and improved rapidly.  At 15, he qualified for the 2000 Olympics, becoming the youngest male to make the U.S. Olympic swim team in 68 years.  Before the start of his sophomore year at Towson High School, Phelps competed in the Sydney Games, where he made the finals and finished fifth in the 200 meter butterfly.  Six months later, he broke the world record in the 200 meter butterfly to become the youngest man ever to set a swimming world record. Phelps became a world champion for the first time in 2001, winning gold while lowering his own world record at the World Aquatics Championships.  By the time he entered the 2004 Athens Olympics, he had claimed eleven more international medals, seven of them gold.  In Athens, Phelps won his first Olympic gold medal after breaking the world record in the 400 IM.  He earned five more golds—while setting two world records and three Olympic records—to finish the meet with eight medals.  Phelps left Greece as the most decorated athlete of the 2004 Games.  After taking gold in 12 of the 13 most important international races of 2006 and 2007, Phelps and Bowman set their sights on the most ambitious Olympic swim program ever attempted, as the “Baltimore Bullet” entered eight races in the 2008 Beijing Games.  In one of the most incredible performances in the history of athletics, Mr. Phelps won eight gold medals in eight races while setting a new world record in seven of them.  Including prelims and finals, he raced 17 times over nine days to break the great Mark Spitz’ [Daily Dose, September 4]record of seven golds in a single Olympic Games.  Between 2009 and 2011, Phelps set six more world records and won 14 additional international titles.  In 2012, he made his fourth Olympic team, winning four gold and two silver medals to surpass Soviet gymnast Larisa Latynina [Daily Dose, February 24] as the most decorated Olympic athlete in history. The Baltimore Bullet has won 18 Olympic gold medals, twice as many as Spitz, Carl Lewis [Daily Dose, August 6], Paavo Nurmi [Daily Dose, June 13] or Latynina, who are tied for second on the all-time list.  He has won 22 medals in three Olympic Games and has been the most the most successful athlete at the last three Olympics.  Phelps set 39 world records—more than any swimmer in history.  As of this writing, he still owns three world records and has won 77 medals –61 of them gold–in international long course competitions.  He also owns a record 62 national swimming titles.   In the history of Olympics competition–Winter or Summer–only three athletes have earned five gold medals in individual events in a single Games; American gymnast Anton Heida in 1904, U.S. speed skater Eric Heiden [Daily Dose, February 15] in 1980, and Michael Phelps in 2008.  Mr. Phelps has been named World Swimmer of the Year seven times and is a nine-time American Swimmer of the Year.  Following his historic performance in the Beijing Games, he was named “Sportsman of the Year” by Sports Illustrated magazine.  On May 5, 2016, Michael Phelps and his fiancée, Nicole Johnson, welcomed their first child, Boomer Robert Phelps, into the world.  Last summer, he swam the three fastest times in the world in the 100 fly, 200 fly and 200 IM. Today, the “Flying Fish” competes in the 200 IM prelim at the 2016 U.S. Olympic Swimming Trials in Omaha.  Tomorrow he swims another prelim, in the 100 meter butterfly. “If you want to be the best, you have to do things other people aren’t willing to do.”