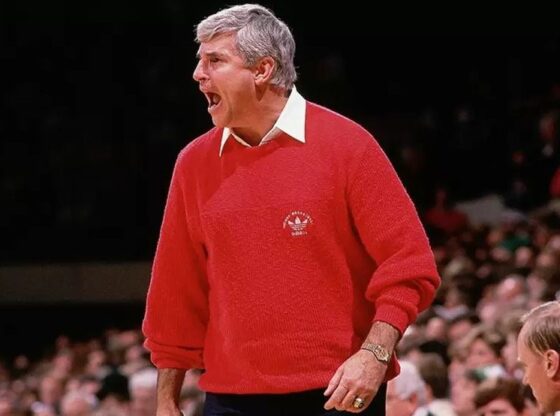 Bob Knight is one of the greatest college basketball coaches of all time.  In 42 years as a head coach of a Division I program, he had one losing season.  A vocal, sometimes profane, and demanding leader, Knight was hard on his players and even harder on officials.  At 24, and with no head coaching experience, he took over the program at Army and led the Black Knights to four NIT appearances and a pair of 20-win seasons, including 22 victories in 1969-70, an academy record.  Knight coached at Indiana University from 1971-2000, leading the Hoosiers to 24 NCAA tournament appearances, 11 Big Ten titles, and three national championships.  In college basketball, 20 wins constitutes a successful season.  Knight won 20 or more games 29 times: two at Army, 22 at Indiana, and five at Texas Tech.  At the time of his retirement in 2008, Bob Knight was the winningest coach in college basketball history, with a career record of 902-371.  The consummate teacher, 14 of his former players and 26 former assistants went on to become head basketball coaches.  In 2011, Mike Krzyzewski, who played for Knight at Army and later assisted him at Indiana, surpassed his former mentor as the winningest coach in Division I history.

Born in Massillon, Ohio, on this date in 1940, Robert Montgomery Knight is the only child of a father who was a railroad man and a mother who taught school.  He was raised in Orrville, a small town in north central Ohio and home of Smucker’s brands [“With a Name Like Smucker’s, It Has to be Good”].  Knight attended Orrville High school, where he played football, baseball and basketball.  He was also an excellent student, graduating eighth in his class of 80.  In 1958, Knight accepted a basketball scholarship to Ohio State, where his classmates included Jack Nicklaus, John Havlicek, and Jerry Lucas.  Tom Weiskopf [Daily Dose, 7/14/15] and Jim Herbstreit [Kirk’s father] also attended OSU while Knight was an undergrad.  Playing as the sixth man, Knight helped the Buckeyes win the 1960 NCAA championship, the only national basketball title in school history.  Ohio State returned to the championship game in each of the following two seasons, losing to Cincinnati in both.  In 1962, Knight accepted a position as assistant JV basketball coach at Cuyahoga Falls High School, where he coached Bob Lewis, founder of the new-wave band, Devo.  The following year, he enrolled in the U.S. Army and became an assistant to Tates Locke at West Point.  When Locke left for Miami of Ohio in 1965, Army promoted Knight.  At 24, he was the youngest head coach in Division I history.

In six seasons at Army, Knight went 102-50.  His 1969-70 team won an academy-record 22 games.  Krzyzewski, who captained the team his senior year, led Army to two NIT Final Four appearances and returned to coach at West Point after graduation.  Mike Silliman played for Knight for three seasons.  He was Army’s all-time leading scorer and captain of the gold medal-winning 1968 U.S. Olympic Team.  Knight has said on several occasions that Silliman is the best college player he has ever coached.  While at Army, Knight met Bill Parcells, who was coaching Army’s football team.  Parcells, like baseball legend Ted Williams, would become a lifelong friend.

Bobby Knight had always dreamed of coaching in the Big Ten.  In April 1968, the University of Wisconsin offered Knight—who had just guided Army to a 20-5 record—their head job.  Wishing to deliver the news to the Army brass in person, Knight asked Wisconsin to keep the news quiet for 48 hours.  The following day, the Badgers announced their new coach.  Irritated that Wisconsin did not honor his request, Knight called good friend Bo Schembechler [Daily Dose, 4/1/16], the Miami of Ohio football coach who had interviewed for, and withdrew his name from consideration as, Wisconsin football coach in 1967.  “Don’t take it.  It’s not the job for you,” advised Schembechler.  “It will try your patience too much.”  Knight never boarded the plane for Madison.  In 1971, his dream became a reality when Indiana University hired the volatile 30-year-old to take over their basketball program.

When Knight replaced Lou Watson at Indiana in 1971, he became the first head coach in 48 years who had not played for the school.  In his second season in Bloomington, he led IU to the Final Four.  Three years later, Knight guided the Hoosiers to an undefeated season that culminated with the 1976 NCAA championship—the last perfect record in men’s Division I history.  From 1974 through 1976, Indiana went 63-1.  The 1976 squad featured three All-Americans and placed all five starters were named All-Big Ten.  Employing an innovative motion offense that emphasized screening, cutting and wise shot selection, IU won 11 Big Ten titles under Knight.  He preached tenacious man-to-man defense and that every pass and shot was contested.  The Hoosiers were especially tough at home, losing only 15 games at Assembly Hall [Daily Dose, 3/31/16] from 1971 to 1981.  Six of his teams boasted a winning percentage of .800 of better.  Knight was maniacal about preparation and attention to detail, making practices so intense for his players that games felt relaxed.  In 29 seasons at Indiana, Knight won three NCAA championships, was voted national coach of the year four times, and was an eight-time Big Ten Coach of the Year.  He directed IU to the 1979 NIT crown and guided Team USA to Olympic gold in 1984, joining Dean Smith [Daily Dose, 8/12/16] and Pete Newell as the only coaches to win NCAA, NIT and Olympic championships.  Coach Knight had seven 30-win seasons at Indiana and had a .667 winning percentage in 24 NCAA tournament appearances.

While Knight piled up wins, his boorish behavior was the subject of much controversy.  After being accused of choking a former player during practice, IU adopted a zero tolerance policy regarding Knight’s behavior in April 2000.  Five months later, the university fired the winningest coach in Big Ten history.  In 2001, Bob Knight became head coach at Texas Tech, a school with little basketball tradition.  The Red Raiders had only been to the NCAA tournament ten times in school history, yet Knight led them to the “Big Dance” in his first season in Lubbock.  In a little over seven seasons at Texas Tech, Knight had five 20-win seasons, led the Red Raiders to four NCAA tournaments, and won 30 or more games three times.  He turned the program over to his son Patrick 20 games into the 2007-08 season.

The General was the youngest coach in Division I basketball history. By age 35, he reached 200 wins—still the youngest coach ever to reach that milestone—and in 2007 won his 880th game to pass the legendary Smith for most career wins.  Knight is the youngest coach to reach 200, 300, and 400 wins and is the only coach in history to win an Olympic gold, Pan Am gold and NCAA championship.  He is one of three men [Dean Smith, Joe B. Hall] to have played for and coached an NCAA champion.  Knight was fierce, combative, and intensely loyal.  He was also an educator.  Of all the athletes that played four years for Coach Knight, only four did not graduate [98 percent].  The national average for Division I schools is 42 percent.  Mr. Knight is also generous.  The only son of a teacher, he raised over five million dollars for Indiana University’s library system and has generated over $300,000 for the library at Texas Tech.

Bob Knight was inducted into the Naismith Basketball Hall of Fame in 1991 and College Basketball Hall of Fame in 2006.  He now needs to restore his strained relationship with Indiana University—where he had his greatest success.  In the past decade, IU has made several attempts to extend an olive branch and allow Mr. Knight to take his rightful place in the annals of Indiana basketball.