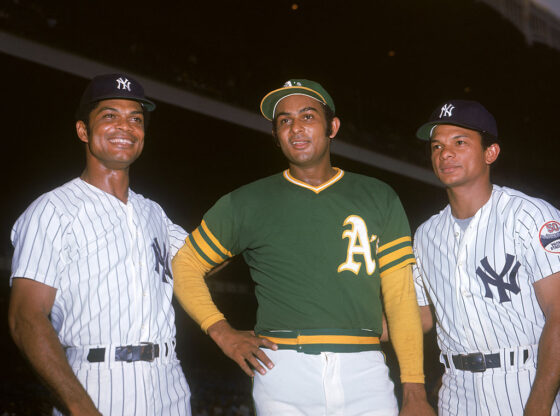 Brothers Felipe, Matty and Jesus Alou combined for more hits than any trio of siblings in Major League history.

The Alous collected 5,094 hits in a combined 47 big league seasons.  The DiMaggios – Dom, Joe and Vince – are next on the list with 4,853, while Ed, Frank and Jim Delahanty had 3,979 combined hits.  Each of the Alou brothers played at least 15 major league campaigns, appearing in a combined 5,129 games.

Born in Haina, Dominican Republic, May 12, 1935, Felipe is the eldest of the brothers.  He was also the best.  Felipe was the second Dominican-born major leaguer, following Ozzie Virgil, and was the big league’s first Dominican star.  A three-time All-Star, he led the National League in hits twice and runs once.  Between 1958 and 1974, he collected 2,101 hits.  Felipe played all three outfield positions regularly and was a superb leadoff hitter.  He hit a home run to begin a game 20 times.  After his playing days were over, Felipe became the first Dominican-born manager in MLB history.  He piloted the Montreal Expos and San Francisco Giants, earning Manager of the Year honors with Montreal in 1994.  When he replaced Tom Rummells as skipper of the Expos in May 1992, he became the fifth father in MLB history to manage his own son – in this case, Moises — who was a third-year outfielder for the Expos.  Moises Alou played 17 major league seasons, batting .303 in 1,942 career games.  He was a six-time All-Star and two-time Silver Slugger.  In 2008, Moises Alou was one of four active major leaguers to hit 20 home runs in a season whose fathers also hit 20.

Mateo, known as “Matty,” was born December 22, 1938.  In 15 major league seasons, Matty Alou hit .307, with 31 home runs, 427 RBI and 1,777 hits.  A two-time All-Star, he spent his first six years with San Francisco, then played with Pittsburg, St. Louis, Oakland and the New York Yankees.  The smallest and fastest of the brothers, Matty was a slap hitter who used the entire field.  He helped form one of the most productive outfields in history in 1966.  Patrolling center field for the Pirates, he batted .342 with 18 doubles and 86 runs scored.  Right fielder Roberto Clemente hit .317 with 29 dingers and 119 RBI, while Willie Stargell played left, batting .315 with 33 home runs and 102 RBI.  In five seasons in Pittsburg, Matty compiled a .327 average.  He finished in the top five in hitting five times, twice led the league in at bats and led the NL in singles and doubles in 1969.

Born March 24, 1942, Jesus is the youngest Alou brother.  Considered a better prospect than either of his siblings, he received a $ 4,000 signing bonus.  Although he once went six-for-six with a homer in a game at Wrigley Field in July 1964, he never reached his full potential.  Selected by the Montreal Expos in the 1968 expansion draft, Jesus was later dealt to Houston.  He had stints with Oakland and the New York Mets before finishing with the Astros in 1979.  Between 1963 and 1979, Jesus Alou gathered 1,216 hits – 32 of them home runs – and drove in 377.

The Alou brothers played together in eight games in 1963.  Felipe, 28, was a regular outfielder, while 24-year-old Matty was a defensive replacement and pinch hitter.  Jesus, 21, was a September call-up.  The siblings never started a game together.

In September 1963, Jesus was promoted from Triple-A Tacoma to the big league club to complete the Giants’ Alou trifecta.  On September 10, all three batted in the eighth inning off Mets’ right-hander Carlton Willey, who retired the Alous in order.  It is the only time in history that three siblings batted in the same half-inning.  Five days later, the brothers made history by playing together in the field.  Facing the Pirates before 18,916 fans at Forbes Field in Pittsburg, Felipe started in center and played all three outfield positions.  In the late innings of a 13-5 rout, Matty and Jesus joined him in the outfield as defensive replacements.  It was the first time in the annals of baseball that a trio of brothers has appeared in the field simultaneously.

The Alou brothers played together in eight games in 1963.  On September 17, Felipe started again and Matty and Jesus moved into the outfield late in the game.  They played in the outfield together one last time September 22, with Felipe again starting before his younger brothers flanked him in the late innings.  Three days later, Felipe started in the outfield while Matty and Jesus pinch-hit.  The next season Felipe was traded to the Milwaukee Braves.  Although the brothers were all in the big leagues for 11 more seasons, there were no more all-Alou outfields.

Matty Alou won the National League batting title in 1966, hitting .342 for the Pittsburgh Pirates.  Felipe hit .327 for the Braves to finish second.  It is the only time brothers have finished one-two in a big league batting race.

The Oakland Athletics had an Alou on their roster from 1970 to 1974, but none of the three brothers ever played for the A’s at the same time.  Felipe was in Oakland in 1970 and 1971.  Matty won a World Series with the green and gold in 1972, and Jesus was part of the Oakland teams that won the World Series in both 1973 and 1974.  Felipe and Matty also played together with the Yankees in 1973.

In 1962, the Giants and Dodgers played a three-game playoff for the National League pennant.  In the final game, Matty’s pinch-hit bunt single sparked the rally that won the pennant for the Giants.  Against the Yankees in Game 7 of the 1962 World Series, Matty again pinch-hit.  Down 1-0 in the bottom of the ninth inning, he led off with a bunt single, bringing up Felipe.  The elder Alou, who had hit 25 home runs and driven in 98 during the season, failed to get a bunt down to move his brother to second.  After Willie Mays doubled, Matty went to third, where he was stranded when Willie McCovey famously lined out to end the game and the Series.

All four members of the Alou family have played in at least one World Series.  Moises led the Florida Marlins by hitting .321 with three home runs and nine RBI in the 1997 Fall Classic to help them to their first world championship.

History was made on this date in 1963, when Felipe, Matty and Jesus Alou became the first trio of siblings ever to play in the same outfield of a major league game.