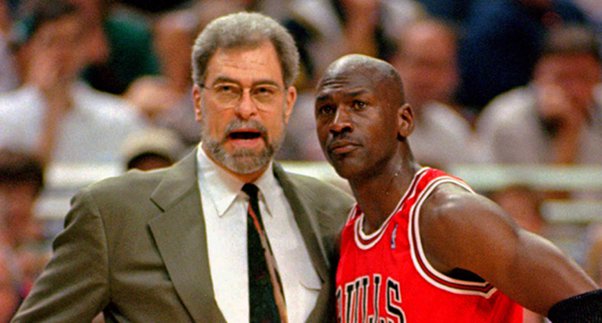 Phil Jackson is the most successful coach in NBA history.

After serving as an NBA assistant for five seasons and spending another five years coaching in the Continental Basketball Association and in Puerto Rico, he took over for the fired Doug Collins as head coach of the Chicago Bulls in 1989.  In his second season in Chicago, Jackson delivered the Bulls the first world championship in franchise history.  It was the first of six titles he would win with Chicago.  In 1999, he took over the reins of the Los Angeles Lakers, where Jackson would win five more NBA championships between 2000 and 2010.

Born in Deer Lodge, Montana – a small town in the western part of the state and home to the Montana State Prison —  on this date in 1945, Philip Douglas is one of Charles and Elisabeth Jackson’s four children.  His parents were Assemblies of God ministers, and the Jackson household was a strict one, disallowing television and rock music.  Growing up, Phil assumed he would become a minister.  Raised in a sheltered upbringing, he did not see his first movie until high school and went to a dance for the first time while in college.

After moving to North Dakota, Jackson attended Williston High School, where he played football, pitched for the baseball team, and threw the discus.  In between, he led the Coyotes to two state basketball titles.  A 6’8” forward, Jackson graduated Williston High in 1963 and was recruited by future NBA coach Bill Fitch to play baseball and basketball at the University of North Dakota.  In the summer of 1965, Jackson made his foray into coaching, when he mentored teenagers in Williston’s Babe Ruth baseball program.

Jackson excelled at UND.  In 1965, he helped the Fighting Sioux to a third-place finish in the NCAA Division II basketball tourney, where they were eliminated by future teammate Walt Frazier and the Southern Illinois Salukis.  The following year, UND was again eliminated by Southern Illinois to finish fourth.  The inquisitive Jackson learned basketball under Fitch while also studying religion, philosophy and psychology at North Dakota.

Although limited offensively, Jackson was a good defender.  He had long arms, worked hard and played with intelligence.  Jackson was rewarded by being named to the NBA All-Rookie First Team in 1968, alongside Frazier and future teammate Earl “The Pearl” Monroe.

Chronic back pain kept Jackson out of the lineup in 1969-70, a season in which the Knicks captured the first world championship in franchise history.  After undergoing spinal surgery, the stoop-shouldered flower child returned to the Knicks for the 1970-71 season.  Jackson became a fan favorite at Madison Square Garden, where he rode a bicycle to home games.

In 1971, the Knicks acquired Monroe from the Baltimore Bullets.  Teaming with Frazier to form the Rolls Royce Backcourt, the duo — along with Willis Reed, Bill Bradley and Dave DeBusschere — seized a second NBA title for the Knicks in 1973.  Playing just over 17 minutes a game off the bench, Jackson was a key reserve, contributing 8.1 points and nearly six rebounds per night.

Following the retirements of Reed and DeBusschere in 1974, Jackson became a Knicks starter.  The 220-pound southpaw continued to contribute on both ends of the floor, but the Knicks were unable to sustain the level of excellence they had achieved in the early 1970s.  The 1970 and 1973 titles remain the only world championships in the franchise’s 72 seasons.

In 1978, Jackson moved across the Hudson to play two seasons for the New Jersey Nets, where he served as player-coach under Kevin Loughery.  The fiery Loughery was often thrown out of games for arguing with officials, leaving Jackson to run the team.  Jackson retired as a player in 1980.  Four years later, he got his first head coaching job, leading the Albany Patroons to the CBA title in his first season.

In 1996, Phil Jackson was named one of the ten greatest coaches in league history as part of the NBA’s 50th anniversary celebration.  The “Zen Master,” who has written eight books, holds the NBA record for most combined titles [13; two as a player and 11 as a coach].  In 2007, the father of five was inducted into the Naismith Hall of Fame.  In 1993, Mr. Jackson accepted the Theodore Roosevelt Roughrider Award, North Dakota’s highest honor.