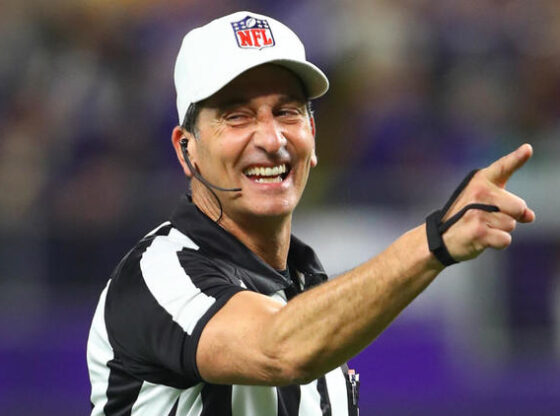 Gene Steratore is wed to the whistle.

A native of Washington, Pennsylvania—located 30 miles outside Pittsburgh—his is a family of officials.  Gene Steratore Sr. refereed college football and basketball games throughout the eastern U.S. for 33 years.  His older brother Tony has been an NFL back judge since 2000 and has officiated two Super Bowls.  Gene’s younger brother Michael works lower division college basketball and cousin Frank officiates college football and basketball.  Every Halloween, one of the Steratore boys would go as a referee.

Gene Steratore is currently working his 14th NFL season.  He entered the league as a field judge in 2003 and was promoted to referee three years later.  Steratore was one of two referees [along with Jerome Boger, who heads his brother Tony’s crew] added for the 2006 season following the retirements of Bernie Kukar and Tom White.  He also referees college basketball, working about 60 NCAA Division I games a season in the Big Ten, Big East, Metro Atlantic and Colonial Athletic Association leagues.

At 11, Steratore began working YMCA basketball games near Pittsburgh for a quarter a game and a can of chocolate pop.  He played quarterback in high school and at Kent State University before his officiating career began in earnest in 1983.  Steratore worked high school and youth league games in western Pennsylvania before refereeing Division I college games beginning in 1997.  After working football in the Big East Conference, he was hired by the NFL in 2003.  Like Deion Sanders and Bo Jackson, Steratore is a professional in two sports. The only other official to do the double is Bill Vinovich, who served as referee for Super Bowl XLIX in Glendale, Arizona in 2015.

A football referee is responsible for the general supervision of the game and has final authority on all rulings.  Sometimes referred to as the head referee, he is considered to be the crew chief and can be identified by his white cap, while all other officials wear black.  In the NFL, the referee gives penalty signals, conducts the coin toss, and announces penalties—and the jersey numbers of the players committing them—over the PA system via a field microphone.  Steratore, who wears number 114 on his uniform, briefly took over as referee for crew chief Bernie Kukar when he was injured in a game between Carolina and the New York Giants in December 2003.  Ironically, it was Kukar’s retirement in 2006 that led to Gene’s promotion to a “White Hat.”  Mr. Steratore worked his first NFL playoff game in January 2009, when the Cardinals played the Panthers in Carolina in a divisional contest.  Exactly one year later, he refereed the AFC Wild Card match between the Ravens and Patriots in Foxboro.  In February 2010, he was chosen as alternate referee for Super Bowl XLIV in Miami and he officiated the NFC Championship Game between Seattle and San Francisco in 2014.

The NFL has 17 crews, each with seven officials.  They are closely monitored, and all 119 are graded on every game.  League rules preclude officials from drinking alcohol the day before a game and even a post-game beer is frowned upon.  For football, Steratore spends 20 to 30 hours a week reviewing his crew’s performance in its last game.  He scouts upcoming teams, participates in conference calls with the league office, and on Friday or Saturday flies first class to the city where he is working, checks into an upscale hotel, and meets with his crew as well as the TV production team.  He then takes a red eye back to Pittsburgh.  During the college basketball season, Steratore drives a lot—which he prefers, as it offers him more control over his schedule.  He books and pays for his own flights and hotels, often working more than three games a week.  The grind is the part he enjoys most.

Steratore was involved in a controversial instant replay in Week One of the 2010 NFL season, when Detroit’s Calvin Johnson caught what appeared to be the winning touchdown late in the fourth quarter of a game against the Bears at Chicago’s Soldier  Field.  The officials overturned the call, ruling that Johnson had lost control of the ball while going to the ground before he “completed the process of completing the catch.”  The controversial call was upheld by the NFL and backed by its former VP of Officiating, Mike Pereira, on FOX Sports.  The rule changed the interpretation of what constitutes a legal catch and has been dubbed the “Calvin Johnson Rule.”  Four seasons later, Steratore was the referee during a divisional playoff game between the Cowboys and Packers in Green Bay when a fourth down catch by Dallas receiver Dez Bryant was overturned using the Calvin Johnson Rule.  The play was originally ruled a catch and would have resulted in first and goal for Dallas at the one yard line.  Green Bay challenged, the call was overturned, and Dallas turned over the football on downs.

In September 2012, Steratore led the first crew to return to the field following the NFL referee lockout.  Prior to a Thursday night game in Baltimore, the crowd cheered passionately as the officiating crew took to the field and restored order in the NFL.

Tony and Gene Steratore own and operate a sanitary supplies store in their hometown.  Gene, who has officiated over 200 NFL games and is extremely fit, is occasionally confused with Ed Hochuli, a veteran NFL referee famous for his muscular arms.  “They say, ‘You look good, but you’ve got a long way to go to get to Ed,’” chuckles Steratore.  Despite his hectic schedule, Steratore is able to separate a false start from a traveling call, even though both use the same signal.  His occupation creates a lot of laundry.  “I have a lot of black socks,” says the 53 year old Steratore.  “I do wear stripes a lot.  When I’m not working, I guess I try to wear solids if I can.”

Clyde and the Pearl
Nicklas Lidstrom