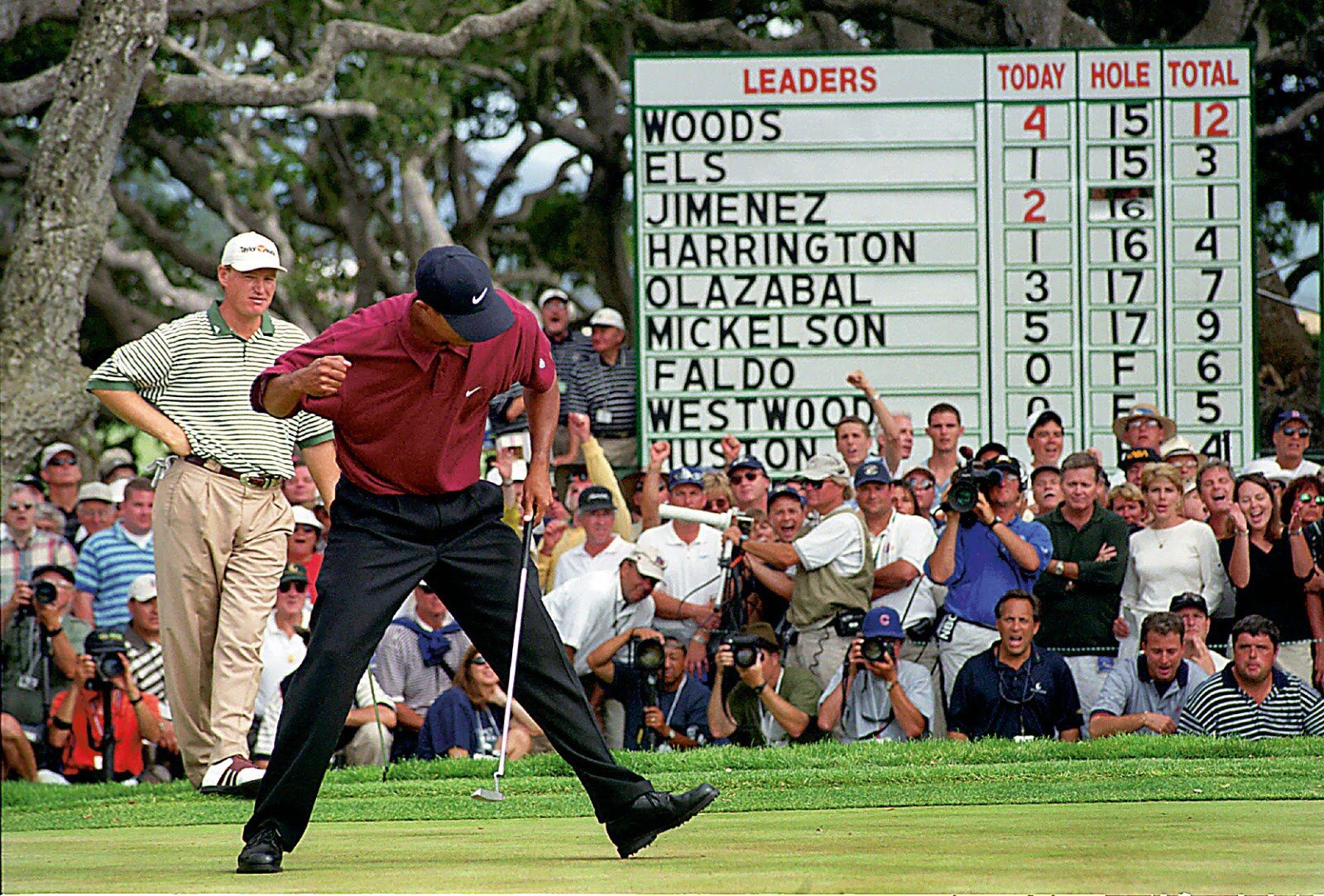 No event in professional golf separates the wheat from the chaff quite like the U.S. Open.  “We’re not trying to humiliate the best players in the world,” USGA chairman Sandy Tatum said in 1974.  “We’re simply trying to identify who they are.”

The USGA’s annual competition has produced some of the most memorable victories in the history of the game.  Here are ten of our favorites. The 2000 U.S. Open was the 100th edition of our national championship.  Held at venerable Pebble Beach, it was more coronation than competition, as Tigers Woods led wire-to-wire to capture his third major championship.  It was the first of three career U.S. Open victories for Tiger, and he became the first player in U.S. Open history to finish at double-digits under par [-12].  Woods’ 15-stroke margin of victory remains the largest in a major championship and his 272 total is the lowest in U.S. Open history. On Father’s Day 1973, four players – including Arnold Palmer – shared the lead entering the final round at Oakmont.  Johnny Miller, who fired a five-over 76 on Saturday, started the day six strokes back.  Miller opened his final round with four straight birdies, then added five more to shoot 63, the lowest round in major championship history.  On a day that saw only three other players break par, Miller hit all 18 greens in regulation and needed only 29 putts to record his 63. After blowing a four-shot lead with three holes to play in 1929, Bobby Jones got it up and down from a green-side bunker on the 72nd hole to force a playoff with Al Espinosa the following day.  Jones dominated the 36-hole playoff on Sunday, beating Espinosa by 23 shots to win his third U.S. Open.  The following year, Jones won his fourth and final U.S. Open and captured the only Grand Slam in golf history. The 1960 event at Cherry Hills Country Club outside of Denver brought together three greats, representing golf’s past, present and future.  Coming off his second Masters win in April, Arnold Palmer was tied for 15th, seven shots back, entering the final round.  After driving the green on the first hole, Arnie reeled off four straight birdies on his way to a record-tying 30 on the front nine.  This put him in a race with 47-year-old Ben Hogan, vying for his fifth U.S. Open title, and Hogan’s playing partner, an Ohio State junior named Jack Nicklaus.  Palmer staged the greatest comeback in U.S Open history, finishing with 65 to capture his first and only U.S. Open title.  Nicklaus finished second while establishing a new amateur scoring record.  Hogan faded down the stretch, playing the final two holes in four-over-par to finish tied for ninth. At the 19th U.S. Open, 20-year-old amateur Francis Ouimet was tied with British legends Harry Vardon and Ted Ray after four rounds at The Country Club outside Boston.  In the Saturday playoff round, all were tied at even par at the turn.  Ouimet, a former caddy, had a bogey-free back nine to beat Vardon by five shots and Ray by six.  The 1913 U.S. Open is one of the most stunning upsets in history and is largely responsible for increasing the popularity of golf in America. The first tournament that the USGA toughened with narrow fairways, deep rough and slick greens was the 1951 U.S. Open.  The South Course at Oakland Hills was turned into a monster, as only two sub-par rounds were recorded by the entire field.  One of them belonged to Ben Hogan, who fired a final round 67 [-3] to win his third U.S. Open title in his last three attempts.  “I’m glad I brought this course – this monster – to its knees,” said Hogan, who claimed U.S. Open crowns in 1948, 1950 and 1951. Jack Nicklaus came into the 1972 U.S. Open on a major championship hot streak, having won the 1971 PGA and ’72 Masters.  The Golden Bear entered the final round with a one-shot lead over Lee Trevino, while Arnold Palmer and Johnny Miller were two back.  By the time he got to the 71st hole, Jack led by three when he hit one of the most dramatic shots in history.  At the 17th, a 218-yard par-three, Nicklaus teed off into a brisk wind blowing in off the Pacific.  His one-iron flew straight at the pin, bounced once, struck the flagstick, and settled inches from the cup for a tap-in birdie.  It was the 13th major championship for the 32-year-old Nicklaus and the third of four career U.S. Open victories. Hale Irwin, who had won U.S. Opens in 1974 and 1979, needed a special exemption to get invited to the 1990 tournament at Medinah Country Club near Chicago.  Five years removed from his last Tour win, Irwin began the final round tied for 20th place.  Playing well ahead of the leaders, Irwin carded a final round 67, which included a 45-foot birdie putt on the 72nd hole.  After the putt dropped, the 45-year-old Irwin took a victory lap around the green, high-fiving spectators.  His 280 total put Irwin in a Monday playoff with Mike Donald.  After the duo was tied following the 18-hole playoff, Irwin overtook Donald on the third hole of sudden death to become the oldest U.S. Open champion in history. Tom Watson was the best player in the world in 1982.  He entered the final round of the ‘82 U.S. Open tied for the lead, three shots ahead of Jack Nicklaus.  After firing a 69 on Sunday, the Golden Bear was in the clubhouse at four under par.  Tied with Jack on the 71st hole, Watson’s tee shot landed in gnarly rough beyond the green – and above the hole.  Facing a nearly impossible shot, Watson chipped in for birdie to seize the lead.  His confidence soaring, Watson birdied the final hole for a two-stroke victory in the only U.S. Open win of his brilliant career. One of the most emotional national championships came at Pinehurst on Father’s Day 1999.  With two holes remaining in the final round of the most exciting U.S. Open of the decade, Tiger Woods, Phil Mickelson and Payne Stewart were tied for the lead at even par. Vijay Singh was one shot back.  A birdie at the penultimate hole vaulted Stewart to the outright lead.  While Singh and Woods faded, Mickelson – whose wife Amy was back home in Arizona expecting to deliver the couple’s first child – left a tying birdie putt just inches short of the hole.  It was the second U.S. Open and third major championship for Stewart, who died four months later in a plane crash.