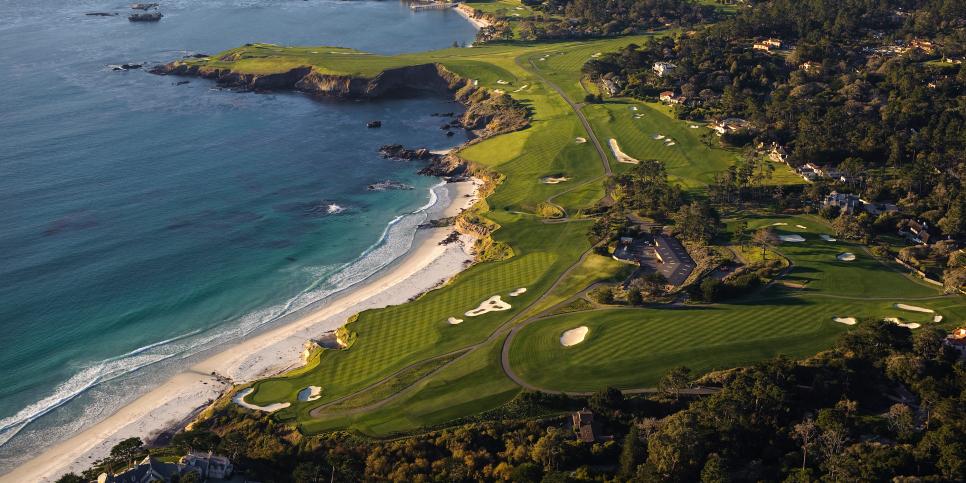 One of the most beautiful courses in the world, the 6,828-yard masterpiece hugs the rugged coastline of Carmel Bay in northern California’s Monterey Peninsula.

Designed by Jack Neville and Douglas Grant, Pebble Beach officially opened 99 years ago today.  Neville’s objective was to place as many holes as possible along the majestic coastline.  Using a figure 8 layout, he was able to place seven seaside holes atop the perilous Cliffs of Doom.

Pebble Beach is where Bing Crosby hosted the Clambake and where Jack hit the flagstick with a one-iron.  It’s the scene of Watson’s impossible chip from behind the green and where Tiger cemented his legend.

Rated the greatest public golf course in America by Golf Digest every year since 2003 — the first year the magazine published its rankings. — Pebble Beach Golf Links is also the most expensive.  Greens fees are $ 535 per player, and tee times may be made up to 18 months in advance for Pebble Beach resort guests.

Boasting mature stands of trees, roller coaster greens of poa annua grass, and breathtaking views, Pebble Beach is but one of several spectacular courses situated on the Monterey Peninsula.  Cypress Point was rated the second-best course in America by Golf magazine, while Spyglass Hill and the Peninsula Country Club are some of the area’s top tracks.

Since opening in 1919, Pebble Beach has hosted several prestigious championships, including five U.S. Opens.  The par-72 layout hosted its first major in 1929 – the U.S. Amateur – when Bobby Jones tied for medalist honors in the stroke-play qualifier.

Jack Nicklaus made history at the first U.S. Open ever contested at Pebble Beach, in 1972.  After wins at both the Crosby and the Masters earlier in the year, the Golden Bear led the ’72 Open wire-to-wire, famously stroking a near-perfect one-iron into a brisk wind to within one foot of the cup at 17.  The ensuing tap-in birdie gave Nicklaus his 13th major title, tying him with Jones for the most in history [Jack would finish his career with a record 18 majors].

A decade later, Nicklaus and the 17th hole were intertwined again.  On the 71st hole of the 1982 U.S. Open, Tom Watson was tied with Jack for the lead when his tee shot at 17 landed in the gnarly rough above the hole.  Watson’s perfectly-struck chip shot found the bottom of the hole, giving the future hall of famer his only U.S. Open title.

Pebble Beach hosted the 100th U.S. Open in 2000 and Tiger Woods put on a show for the ages.  Woods was dominant, tying or setting nine U.S. Open records.  His 15-shot win remains the largest margin of victory in major championship history.The picturesque beauty of the golf course is unrelenting and the challenge inspiring.  With small greens and stiff winds off the Bay, Pebble is not long, but it can be diabolical.  The majestic course features some of the best holes in golf.

After opening with three inland holes, the fourth through tenth holes run along the shores of Stillwater Cove before returning inland.  The seventh hole is spellbinding.  A beloved par-3 of just over 100 yards, it is the shortest hole on the PGA Tour.  With a drop of 40 feet from tee to green, players must contend with the sounds of barking seals and crashing waves as they attempt to hit a tiny green that appears to jut out of the Pacific.

The eighth hole, a 427-yard par four with the ocean along the right, requires a second shot from a cliff above the green.  Nicklaus called it his favorite approach shot in all of golf.

The long par-three 17th is situated on a peninsula and usually plays into the wind.  The 18th, a medium-length par-5, may be the greatest closing hole in golf.  With the jagged coastline running along the entire left side of the dogleg-left fairway, players must negotiate a Cypress tree in the middle of the fairway, then avoid a long bunker running along the ocean from the green.

The U.S. Amateur will return to Pebble Beach Golf Links for the fifth time this August.  Next summer, Pebble will celebrate its centennial by hosting its 13th USGA championship, the 2019 U.S. Open.  It will mark the 6th time that the national championship will be contested on America’s greatest public golf course.

“If I had only one more round to play, I would choose to play it at Pebble Beach.” – Jack Nicklaus