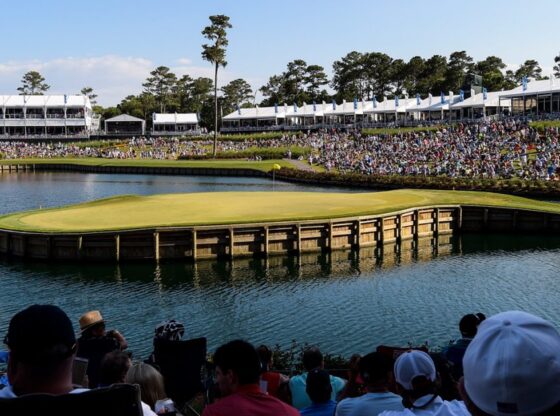 The 46th edition of The Players Championship gets underway tomorrow in Ponte Vedra Beach, Florida.

Long considered golf’s “fifth major,” the Players is one of the PGA tour’s most coveted titles and offers golf’s second-richest purse, behind the U.S. Open.

The event attracts one of the strongest and deepest fields on Tour.  The 2018 championship featured each of the top 53 players in the world, as well as a few stars outside the top 50 like two-time champion Tiger Woods and 2004 winner Adam Scott.

The brainchild of former PGA Tour commissioner Deane Beman, the inaugural event began on a rainy August day in 1974 at the Atlanta Country Club.  Rain delayed the final round until Monday, when Jack Nicklaus overcame a three-shot lead by J.C. Snead to win.  Nicklaus would go on to win the tournament every other year for the next four years [1974, ’76, ‘78] – all at different courses.  Beginning in 1977, the event moved to Ponte Vedra Beach, where for five years, it was played at Sawgrass Country Club.

Beman envisioned a site for a tournament that would be owned by the players on the PGA Tour.  He purchased 415 acres of Florida swampland across the street from Sawgrass Country Club for $1, then broke ground in 1980.  Two years later, on a clear and sunny March morning, the Players Championship was hosted by the Tournament Players Club [TPC] at Sawgrass for the first time.

Designed by Pete and Alice Dye, architects of Crooked Stick, Harbour Town and Whistling Straits, among others, TPC Sawgrass is situated one mile west of the Atlantic Ocean.  Located at 110 Championship Way, the venue is a short walk from PGA Tour headquarters.  The complex has two courses: Stadium and Valley.  Constructed specifically to host the Players Championship, the Stadium Course has a capacity of 36,000.  It employs a distinctive “stadium” concept, built with a series of raised grassy mounds that provide fans an unobstructed viewing experience.

One of the most difficult courses in the world, the par-72, 7,189-yard TPC layout is Dye-a-bolical.

Narrow fairways, waste bunkers and deep pot bunkers are Stadium Course trademarks.  Mix in thick rough, tall palms and rock-hard, lightning-fast greens and you are left with one of the most demanding tests in golf.  After Greg Norman shot 264 to set the tournament scoring record in 1994, the PGA Tour decided to toughen the Stadium Course.  Lee Janzen won the following year shooting 283, the biggest one-year swing in Tour history.

The signature hole at Sawgrass is the 17th, a 137-yard par-3 known as the “Island Green.”  It is one of golf’s most recognizable and difficult holes – especially with the title at stake on Sunday.  Since 2003, 598 balls have gone in the water at 17during the Players Championship.  In the gusty opening round in May 2007, a record 50 balls found the water surrounding the Island Green.

Initial reviews of Dye’s design were harsh.  Ben Crenshaw called it “Star Wars golf, designed by Darth Vader.”  Snead said the layout was “90 percent horse manure and ten percent luck.”  During the inaugural event, Nicklaus was asked if the TPC suited his playing style.  “No,” replied the Golden Bear, “I’ve never been good at stopping a 5-iron on the hood of a car.”  The course has undergone significant changes over the past 38 years and is now considered one of the best – and most popular – on Tour.

The list of winners at the Players reads like a who’s who of golf.  Nicklaus has won a record three times.  Five others have won twice, including Woods and Fred Couples, yet no one has ever successfully defended their title.  Other Players champions include Ray Floyd, Lee Trevino, Phil Mickelson and Rickie Fowler.  Fred Funk became the event’s oldest winner when he captured the 2005 title ten weeks shy of his 49th birthday.  Kim Si-woo became the youngest winner, at 21, in 2017.

Jerry Pate won eight times on the PGA Tour.  His last victory came in 1982, at the inaugural Player’s Championship at TPC Sawgrass.  Pate celebrated by throwing Dye and Beman into the lake adjacent to the 18th green, then jumped in himself.  Craig Perks and Tim Clark each made the Players their first Tour victory.  The course record of 63 is shared by eight players, including Norman, whose 24-under-par 264 total remains the low total for the tournament.  The highest winning score in Players history is 289, shot by Mark Hayes in 1977 and matched by Nicklaus in 1978.

TPC Sawgrass features a spectacular, 77,000 square foot clubhouse, which is visible from more than half the holes on the course.

Completed in 2007, the Mediterranean Revival structure is a virtual museum of the history of the Players Championship.  Each year, the champion is asked to donate one club that played a critical role in winning the tournament.  Nicklaus was first, donating his wooden persimmon driver.  Wedges lead the list of the most-donated club, with 14 lining the wall inside the clubhouse.  Only three putters, including the one Adam Scott used to make a ten-foot bogey putt on the 72nd hole to seal his one-shot victory in 2004, adorn the wall.

This week’s field of 144 players includes 11 past champions.

Those qualifying include winners of PGA Tour events since the last Players Championship, the top 125 from the previous season’s FedEx Cup points list and the last three winners of the Tour Championship.  Winners of the Memorial and Arnold Palmer Invitational tournaments receive an invite, as do the top 50 players from the Official World Golf Ranking.  In addition to the $1.89 million first place prize, the Players Championship winner receives a five-year Tour exemption, a three-year invitation to the Masters, and three-year exemptions to the U.S. Open, Open Championship, and PGA Championship.

For the first 30 years at Ponte Vedra Beach, the championship was played in March, several weeks before the Masters.  In 2007, it was moved to May in order to bridge the Masters, which is held in April, and the U.S. Open, which takes place in June.  Beginning this year, the Players returns to March, where it is a better event.  The early spring slot requires the course to be overseeded with rye grass, which looks and plays better than the native Bermuda of May.  In addition, the move provides the Tour with marquee events each month from March to August, as the PGA Championship has shifted to May and the season-ending Tour Championship will now be held in August.  The Masters, U.S. Open and Open Championship retain their traditional April, June and July slots on the golf calendar.

The four-day event concludes with a St. Patrick’s Day finish Sunday evening.  Last year’s champion, Webb Simpson, seeks to become the first player to successfully defend his title.  The Golf Channel will carry live coverage on Thursday and Friday afternoon. NBC will take over on the weekend beginning at 2 p.m. ET.