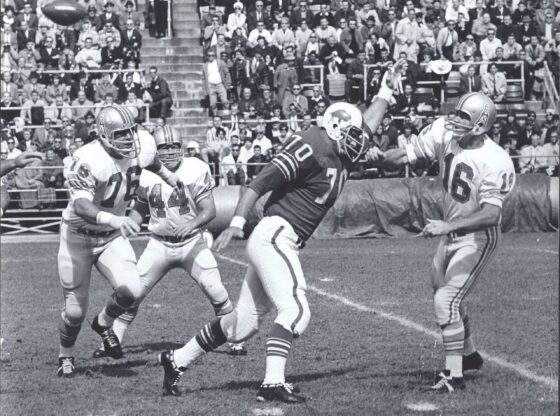 The American Football League operated for ten seasons between 1960 and 1970.  During that time, the AFL turned the pro football establishment on its ear. Created by a group of owners who had been denied NFL franchises – dubbed the Foolish Club – the AFL kicked off its inaugural season with eight teams in 1960.  The league’s original lineup consisted of two divisions: Eastern and Western.  The East included the New York Titans [later Jets], Boston [New England] Patriots, Buffalo Bills and Houston Oilers.  The West was comprised of the Dallas Texans [who moved to Kansas City in 1963 to become the Chiefs], Denver Broncos, Oakland Raiders and Los Angeles [later San Diego] Chargers.

The AFL changed professional football in many ways.  Beginning with the Houston Oilers’ signing of 1959 Heisman Trophy winner Billy Cannon, the upstart league attracted talent.  The AFL introduced the two-point conversion, a 14-game schedule, and practice of the use of stadium scoreboard clocks to keep official game time.  The new league featured a more exciting style of play and colorful uniforms that included players’ names on the backs of their jerseys.  Perhaps most importantly, the AFL began recruiting players from small black colleges, providing opportunities for African-American players while breaking the unwritten “quota system” rules the NFL had adhered to for decades.

In January 1970, the American Football League officially announced its all-time team as part of its final event — the 1970 All-Star Game — scheduled to take place in the Houston Astrodome January 17.  Determined by a panel of the AFL’s Hall of Fame Board of Selectors, two 25-man rosters were chosen: a First Team and a Second Team.  Each squad featured 11 position players for both offense and defense, as well as one punter, one placekicker and a head coach. While the voters got most of the AFL All-Time Team right, their head coaching choice of Weeb Eubank missed the mark badly.  Although Eubank led the New York Jets to the most important victory in pro football history, a 16-7 upset over the Baltimore Colts in Super Bowl III, his AFL coaching record pales in comparison to that of Kansas City Chiefs head coach Hank Stram.  In seven years with the Jets, Eubank had three winning seasons, but also finished last three times.  He won two division titles, was 2-1 in the playoffs, and posted a winning percentage of .543.  Stram is the winningest coach in AFL history.  He won three league titles, was 5-2 in playoff games and appeared in half of the Super Bowls played during the AFL era.  Competing in the same division as the Oakland Raiders, Stram’s teams finished first or second in eight of ten seasons.  Coach Stram compiled a .644 winning percentage and he was one of pro football’s greatest innovators. Of the 11 defensive starters on the all-time team, three – Nick Buoniconti, Bobby Bell and Willie Brown — are in the Pro Football Hall of Fame.  Buoniconti played in five AFL All-Star Games with the Boston Patriots before helping the Miami Dolphins to two straight Super Bowl titles.  Bell was named the NFLs 1970s All-Decade Team and is one of the dozen best linebackers in football history.  Brown was an All-Star cornerback for the Denver Broncos and later won three Super Bowls with the Raiders.  He is Oakland’s franchise leader in career interceptions. Linebacker George Webster was so good he made the First Team despite playing only three AFL seasons, all with the Houston Oilers.  Like Willie Brown, Dave Grayson was a cornerback who starred for two AFL teams.  Playing for the Dallas Texans in 1961, he led the league in kickoff returns and set an AFL record with a 99-yard interception return.  Grayson was traded to Oakland in 1965, where he played in three All-Star Games before retiring as the AFL’s all-time interceptions leader, with 47. The Texans/Chiefs placed four players on the all-time defensive team.  In addition to Bell, Jerry Mays, Johnny Robinson and Buck Buchanan were named.  Mays, a defensive end out of SMU, never missed a game in a decade.  Robinson is the greatest AFL player not in the Hall of Fame [he is a six-time finalist].  Buchanan was the most dominant defensive tackle in AFL history.  At 6’7, 270, he ran the 100-yard dash in 10.2.  Grambling State’s Eddie Robinson, who coached Willie Davis and Ernie Ladd, called Buchanan the “best lineman I ever saw.”  A six-time AFL All-Star and member of the Pro Football Hall of Fame, Buchanan was voted as a Second Team defensive tackle, behind Buffalo’s Tom Sestak and Houston Antwine of the Boston Patriots. The American Football League was known for its innovative, wide open offenses.  It is fitting that six starters and one second-teamer from the All-Time Team are in the Pro Football Hall of Fame. While Jets coach Weeb Eubank gets far too much credit for his contributions to the AFL – and a place on the all-time First Team – Joe Namath deserves everything he gets.  Playing in the media capital of the world, Broadway Joe was the league’s most important player.  His impact on the AFL cannot be overstated.  Like Julius Erving and the ABA, Namath brought credibility to the fledgling circuit.  He attracted television viewers, put fans in the seats, and is the athlete most responsible for forcing the 1966 NFL merger.  Dawson, Blanda, Kemp and Lamonica were good, but none were Joe Willie Namath, the greatest quarterback in AFL history. The first AFLer inducted into the Hall of Fame, Lance Alworth was 1963 AFL Player of the Year, a season in which he led the Chargers to the only title in franchise history.  The only member of the NFL 75th anniversary team who played primarily in the AFL, Bambi is the finest receiver in the history of the AFL.  Don Maynard, who was Namath’s favorite target with the Jets, was named as the other wideout. Center Jim Otto was voted All-AFL ten times, making him the starting center in every year of the league’s existence.  Otto is one of only three players to play in all of their team’s AFL games.  Ron Mix of the Chargers was voted All-AFL nine times.  The talented USC Trojan was a first-round pick in both the NFL and AFL in 1960.  Dubbed the Intellectual Assassin, Mix was only called twice for holding in his entire ten-year career.  Buffalo Bills guard Billy Shaw was voted All-AFL in each of his eight pro seasons.  Shaw is the only player in the Pro Football Hall of Fame to have never played in the NFL. The three Texans/Chiefs all-time team starters lined up alongside one another for seven AFL seasons.  Fred Arbanas of Arkansas was the league’s best tight end.  Tackle Jim Tyrer as voted All-AFL eight times.  Ed Budde, an All-American guard out of Michigan State, was the Chiefs’ first-round pick in 1963.  The first offensive lineman ever named AP Offensive Player of the Week, Ed’s son, Brad, a USC All-American who was selected by Kansas City in 1980.  Ed and Brad Budde are the only father-son duo to be first-round picks for the same NFL team. During its decade of existence, the AFL was one of the most exciting sports leagues in history.  Its contributions were vast, and made a lasting impression on professional football in America.  The AFL added franchises in Miami in 1967 and Cincinnati in 1968.  Announced in 1966, the AFL-NFL merger took effect in 1970.  All ten original AFL franchises formed the NFL’s American Football Conference.

Rick Ankiel
The Whoosh and The Wedge