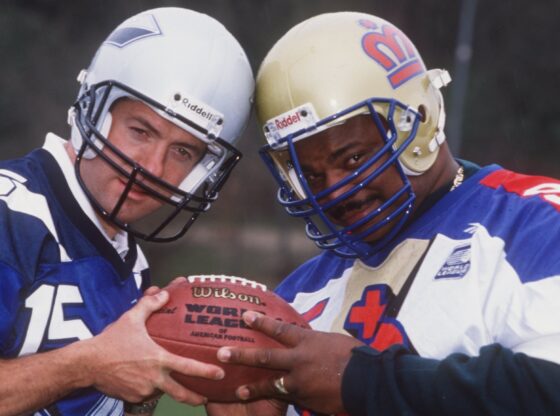 The World Football League [WFL] was a short-lived organization that sought to globalize American football.

The brainchild of Gary Davidson, who also had a hand in founding the American Basketball Association and World Hockey Association, the WFL is now largely forgotten.  Davidson, a 39-year-old attorney from Newport Beach, California, officially launched the WFL in October 1973.  At a press conference in Chicago, Davidson proclaimed that another league was a necessity.  Believing the long-established NFL to be vulnerable, he proclaimed the senior league had “become arrogant and fat,” declaring, “We’re ready to take on the big boys now.”

Davidson announced his core of investors – a group he called the Founding Fathers – that would get the league off the ground.  The most prominent was Canadian movie producer, John F. Bassett, a former tennis prodigy and owner of the WHA Toronto Toros.  Bassett came from a wealthy family whose interests included the CFL Toronto Argonauts, both Toronto newspapers and several television stations.  Bassett was given a franchise for Toronto.  Other founders included Robert Schmertz, who owned the Boston Celtics and New England Whalers, and Howard Baldwin, future owner of the Pittsburgh Penguins.  Davidson took the Philadelphia franchise for himself.

Bassett established his team as the Toronto Northmen.  When Canadian Prime Minister Pierre Trudeau declared the WFL to be in violation of the Canadian Football Act, which precluded any U.S-based league from competing with the CFL, Bassett moved his team to Memphis, where they became the Southmen.  While the renegade league was not successful in establishing an international franchise, the WFL was the first to place a team outside the continental U.S., establishing a club in Hawaii.

More owners joined the Founding Fathers and a dozen franchises were formed.  The 12-team WFL consisted of three divisions with four teams each.  The Eastern Division was comprised of the Florida Blazers, New York Stars, Philadelphia Bell and Jacksonville Sharks.  The Central Division included the Memphis Southmen, Birmingham Americans, Chicago Fire and Detroit Wheels.  The Southern California Sun, Honolulu Hawaiians, Portland Storm and Houston Texans made up the Western Division.

Originally slated to begin play in 1975, the league kicked off one year earlier than planned to take advantage of players’ strikes in both the National and Canadian Football Leagues that left North America without football in the late summer of 1974.  At issue was low pay.  Pro football was at the bottom of the wage scale among the four major North American sports leagues, and the upstart league aimed to take advantage by pilfering players from NFL rosters while becoming the only game in town.

The inaugural season began with 12 teams playing a 20-game schedule – six more than the NFL — over 19 weeks.  There were no preseason games.  The 1974 campaign launched July 10 and was scheduled through November 13.  There was no bye week, and the league doubled up the week of Labor Day, playing four games in three weeks.  Most games were played on Wednesday nights with a national TV game [telecast on TVS] slated for Thursday nights.  The Hawaiians played home games on Sunday afternoons, requiring opponents to fly to Honolulu after having played just four days earlier.  The original schedule called for a four-team playoff in November, culminating with the championship game – the World Bowl – the night after Thanksgiving.

The WFL got off to a flying start, averaging just under 43,000 fans a game in the first few weeks of the season.  However, when news that approximately 100,000 of the 120,00 fans that attended the Philadelphia Bells’ first two home games had been admitted for free – a scandal dubbed Papergate — it seriously eroded the league’s credibility.  Six games into the first season, World League teams were in serious financial trouble.  The Houston Texans moved to Shreveport to become the Steamer.  A week later, the Stars bolted New York to become the Charlotte Hornets.  In October, the Detroit Wheels and Jacksonville Sharks folded.  Jacksonville’s departure forced a relocation of the World Bowl, since it was originally scheduled to play host to the title game.  Chicago was so strapped that the Fire forfeited its final game to Philadelphia, 2-0.

Underfunded teams were unable to meet payroll.  The Florida Blazers went three months without pay and survived on McDonald’s meal vouchers.  Coaches were unable to film games and the Hornets had their uniforms impounded for unpaid laundry bills.  One player was forced to pay a hospital bill for his son after discovering the team’s insurance policy was worthless.  Perhaps the most bizarre incident involved defensive end John Matuszak, who had left the NFL’s Houston Oilers to play for the WFL Texans.  During a Week 7 game in New York, Matuszak sacked Stars quarterback Tom Sherman, then was handed a restraining order and forced to leave the game.  A federal judge ruled that Tooz was still under contract with the Oilers and could not play for the Texans.

Davidson was forced to resign as Commissioner in October 1974, and Hawaiians owner Christopher Hemmeter was named his replacement.  The Hornets, who finished second in the Eastern Division, earned the right to host a playoff game.  Due to poor ticket sales, the Hornets dropped out of the postseason entirely, allowing the third-place Bell to take their playoff spot.  On December 5, 1974, a half-empty Legion Field in Birmingham hosted the World Bowl.  Quarterback George Mira, who would be named the game’s MVP, led the Birmingham Americans to a 22-21 win over the Florida Blazers.  Days later, the Americans’ office furniture was repossessed.

Somehow, the WFL came back for a second season in 1975.  The schedule was reduced to 18 games, which were moved from weeknights to weekends.  Only four teams returned from the inaugural 1974 season, and seven of the 11 franchises that started the 1975 campaign had new owners.  But the fledging league didn’t survive long enough to hold a second World Bowl.  Financial troubles forced the World League to shut down for good in October 1975, just past the midway point of the season.  The Birmingham Vulcans had the best winning percentage [.750] at the time the league ceased operations and former USC running back Anthony Davis was unofficially named 1975 Rookie of the Year and World League MVP.

Unlike what he had done with the ABA and WHL, Gary Davidson did not bring any surviving WFL teams to the senior league, the NFL.  Despite all its travails, the World League made an impact.  It pioneered Thursday Night Football, sudden-death regular season overtime, and outlawed bump-and-run pass coverage beyond three yards of the line of scrimmage, all later adopted by the NFL.

On this date in 1974, the Florida Blazers shut out the Chicago Fire, 26-0, before 16,679 fans at in Orlando.  In a Thursday night game, a national TV audience saw Florida quarterback Bob Davies throw three touchdown passes to hand Chicago the fourth of 11 straight losses they would suffer to end the season.

“As I see it, I stand to profit by more than a million dollars from the formation of my league.”  — Gary Davidson, in 1973.