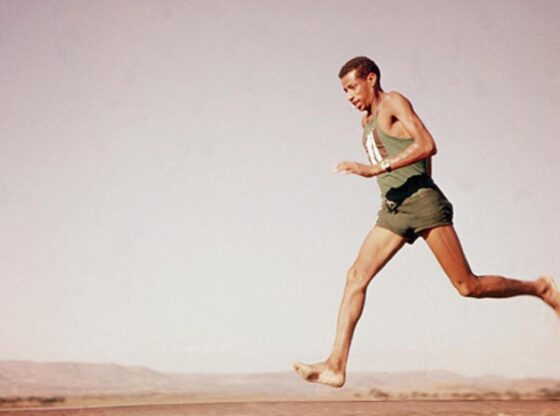 The first East African to win an Olympic medal, Bikila was one of the greatest marathon runners of all time.  In 1960, he amazed the world when — unknown and unheralded — he won the Olympic marathon.  As an international superstar four later, Bikila became the first person to win the marathon twice, when he captured gold at the 1964 Tokyo Games.

Abebe began and inspired the great East African distance running avalanche.  He pioneered the use of high-altitude training to build endurance, leading the way for East Africa to become a force in the sport.  In 1968, Mamo Wolde continued Ethiopia’s dominance by winning the Olympic marathon.  Kenyan Paul Tergat became one of the most accomplished distance runners of all time, and fellow countryman Haile Gebrselassie  won eight World Championships and two Olympic gold medals during his stellar career.

Mr. Bikila, who twice shattered the marathon world record, has been the subject of several books and films.  In 1972, he was featured in Bud Greenspan’s documentary, The Ethiopians.  Abebe is also the subject of the 2009 feature film, Atletu [The Athlete].  Books recounting his life include Barefoot Runner and Triumph and Tragedy, written by his daughter and published in 1996.

Winner of a dozen international marathons between 1960 and 1966, Bikila is a national hero in Ethiopia.  A stadium in the capital city of Addis Ababa is named in his honor, as are several schools and venues in East Africa.  Since 1984, the Abebe Bikila International Marathon has been held in Addis Ababa.

Born August 7, 1932 – the date of the Los Angeles Olympic marathon – Bikila grew up in a village called Jato, in the Ethiopian region of Shewa.  The son of a shepherd, Bikila was a skillful horseman and good swimmer as a youngster.  At 17, he moved to Addis Ababa.  Bikila joined the infantry, where he served as a captain in Emperor Haile Selassies’ Imperial Guard.  While training with the First Division, he ran 12 miles every day.  Bikila was soon discovered by Onni Niskanen, a Swedish coach employed by the Ethiopian government.  Niskanen began grooming his pupil for the marathon, and Abebe finished second in his first race, the 1956 Ethiopian Armed Forces championship.

Abebe won his first marathon in July 1960.  A month later, he won again, in a time of 2:21.23 – faster than the existing Olympic record held by Emil Zatopek.  In September, Bikila was added to the 1960 Olympic team at the last minute when teammate Wami Riratu was injured playing soccer.  Upon arriving in Rome, Bikila bought new running shoes, but they fit poorly and gave him blisters – so he decided to run barefoot.

The 1960 Olympic marathon started in the late afternoon and finished in darkness.  For the first half of the race, Abebe was at the rear of the lead pack, which included Rhadi Ben Abdesselam of Morocco and world record holder Sergei Popov.  At the 16-mile mark, Bikila and Abdesselam surged to the front.  With 500 yards to go, Bikila passed the Moroccan at the Obelisk of Axum, a monument that had been plundered from Ethiopia by Italian troops and hauled away to Rome.  As Italian soldiers held torches to illuminate the finish line on the street outside the Coliseum, the 28-year-old Abebe crossed first, beating Abdesselam by 25 seconds.  His winning time was 2:15.16, breaking Popov’s world record by less than a second.

Bikila returned to his homeland a hero.  He was awarded the Star of Ethiopia, given a home, and provided a car.  Buoyed by his Olympic success, Abebe rose from relative anonymity to become the preeminent marathoner in the world in the early 1960s.

Abebe underwent an appendectomy 40 days before the 1964 Olympic marathon.  Unsure of his fitness, he stayed behind the lead pack for six miles, then slowly increased his pace.  Running in shoes and socks, Bikila took the lead at the halfway point, then pulled away to win convincingly.  By the time second-place finisher Basil Heatley of Great Britain entered the Olympic stadium, Bikila had already cooled down and was stretching.  He finished in 2:12.11, lowering Heatley’s world record by 44 seconds while thrashing the Brit by four minutes.  In the process, Abebe had become the first person ever to win back-to-back Olympic marathons.

Persistent hamstring injuries plagued Bikila following the Tokyo Olympics.  He continued to train, and fractured his fibula preparing for the 1968 Olympics in Mexico City.  Abebe stayed off his feet until the day of the Olympic marathon.  Seeking an unprecedented third consecutive gold medal, he raced valiantly until leg pain forced him to drop out at the ten-mile mark.  It was the great Ethiopian’s last marathon appearance.

In March 1969, a car accident left Abebe paralyzed.  Although he regained some upper-body mobility, he never walked again.  The ultimate warrior, he took up paraplegic sporting competitions.  Bikila competed in archery and table tennis at the 1970 Stoke Mandeville Games in London – a precursor to the Paralympic Games.  One year later, he took first in a dog sled race at the International Paraplegic Games in Norway.

Abebe attended the 1972 Munich Games as a special guest, and received a standing ovation during the opening ceremony.  After American Frank Shorter won the gold medal in the marathon, he made it a point to shake the legendary Ethiopian’s hand.  On October 25, 1973, Abebe died of a brain hemorrhage, a complication from his accident four years earlier.  Mr. Bikila was buried with full military honors, and his state funeral was attended by 65,000 people.  The Emperor proclaimed a day of mourning for the country’s national hero, who was 41.

Five years after his death, the New York Road Runners Club inaugurated the Abebe Bikila Award, given annually for contributions to long-distance running.  To date, five East Africans have received the award.