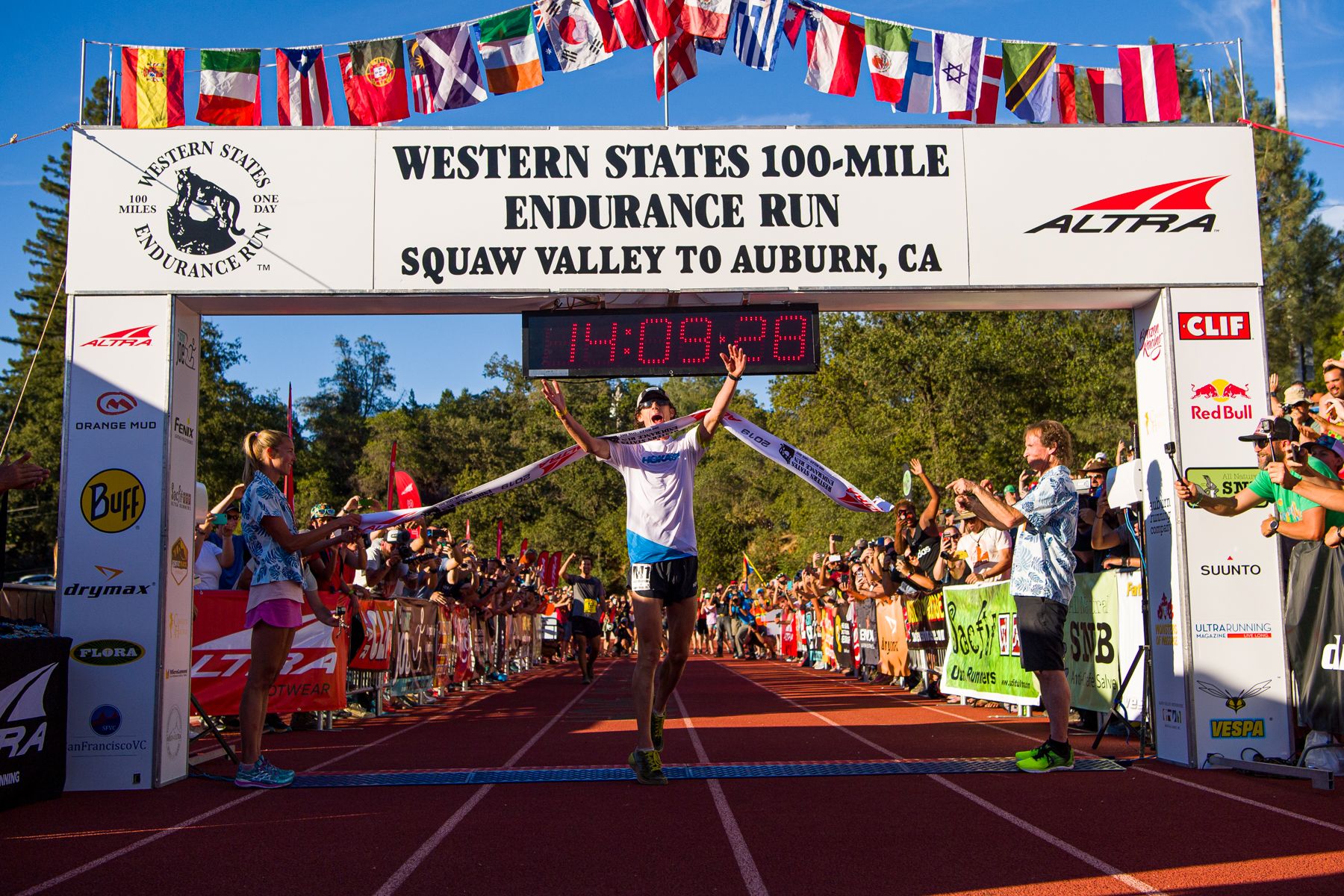 Starting in Squaw Valley, California — near the site of the 1960 Winter Olympics —  and ending 100 miles later in Auburn, California, Western States is America’s most famous ultramarathon.

Following the historic Western States Trail, runners climb more than 18,000 feet and descend nearly 23,000 feet before reaching the finish line at Placer High School.  The trail takes runners through the majestic high-country beauty of Emigrant Pass and the Granite Chief Wilderness.  They endure the punishing canyons of the California gold country, cross the frigid waters of the American River at Mile 78, and traverse the rugged reddish-brown trails of the Sierra Nevada Mountains.

The Western States Trail extends over the Sierra Nevada from Salt Lake City to Sacramento.  Originally a Native American route, it was taken up in the 19th century by prospectors seeking a passing between the gold mines near Auburn and the silver mines of Nevada.  In 1955, Wendell T. Robie and a party of five horseman rode the Western States Trail from Tahoe City to Auburn, confirming that horses could still cover 100 miles in one day.  Mr. Robie organized an annual event that came to be known as the Tevis Cup “100 Miles – One Day” Ride.

They say there are three types of runners at the Western States 100: the Survivors, the Runners, and the Racers.

In 1974, Tevis veteran Gordy Ainsleigh joined the horses at the Western States Trail Ride to try and complete the course on foot.  Ainsleigh arrived in Auburn after 23 hours, 42 minutes, proving a runner could cover the trail within the 24-hour time limit of the Tevis Cup.  Ron Kelley attempted the feat the following year, as did Ken Shirk in 1976.  Neither finished in under 24 hours.  The race exploded in popularity and, by 1980, included 251 runners, 124 of whom finished.  Since 1986, the event has never had a field of fewer than 341.

Most of the Western States Trail passes through remote and rugged territory.

The high mountains and deep canyons – although beautiful – are relentless in their challenge and unforgiving to the ill-prepared.  The remoteness of the trail can lead to disaster for anyone not experienced in the backwoods.  In 1995, the Sierras were blanketed with a record 836 inches of snowfall.  The snowmelt was so abundant that volunteers had to ferry runners across the raging American River in rubber boats, while temperatures reached a scorching 107 degrees at the lower elevations of the course.

The Western States 100 begins at 5 a.m. on Saturday of the last full weekend in June.

Runners start at the west end of the Squaw Valley ski resort and must reach the finish line not later than 10:59.59 am the following day in order to be eligible for an award.  The Western 100 is the undisputed crown jewel of human endurance — the Super Bowl of ultramarathons.  Racers compete for one of the two most prized possessions in ultrarunning: the Western 100 belt buckle.  Runners completing the course in under 30 hours receive a bronze belt buckle, while those finishing in less than 24 hours earn the coveted silver buckle.

For more than four decades, the Western States 100 has witnessed legendary competitions.  One of the ultimate endurance tests in the world, it attracts runners from all walks of life and from all over the globe.  Last year, more than 5,800 applicants vied for 369 spots in the race [the U.S. Forest Service limits the event to 369 runners].  The field drew competitors from more than 30 countries and 40 states.

One of the five 100-mile races that comprise the Grand Slam of Ultrarunning, the Western States 100 owns the sport’s richest and most compelling history.  Scott Jurek’s 2005 victory was his seventh consecutive win.  Ann Trason won the women’s race 14 times.  Tim Twietmeyer completed the Western 100 a record 25 times, all in under 24 hours.  He won the event five times.

Ultrarunning is a sport that favors a tortoise-over-hare mentality.  It rewards athletes who have a talent for grinding and suffering rather than running fast.

Jim Walmsley broke the course record in 2018, finishing in 14:30.04.  It was the Flagstaff, Arizona, native’s third attempt.  Walmsley led the Western States 100 in both 2016 and ’17 before exhaustion ended his races early.  The 28-year-old Air Force grad would have finished the 2018 race sooner, but was delayed by a mother bear and her cubs on the trail at the 95-mile mark.

The event attracts an elite field.  The top ten male and female finishers from the previous year’s race gain automatic entry, as do winners of other top ultras from around the world.  Most of the 369 slots are filled via lottery.  To become eligible, applicants must have completed one of the 130 Qualifying Races within the previous year.

Volunteers are the life blood of the Western States 100.  Over 1,600 dedicated individuals help the runners get from Squaw Valley to Auburn.  The river crossing alone has a team of 125.  Spots in the field remain available until race time.  In 2017, 27 runners made it off the wait list, the last of whom gained entry the Friday afternoon before the Saturday morning start.  Last year, 23 runners cleared the waitlist, with the final spot being filled at the starting line on race day.

The Western States 100 is one of most grueling races in the U.S.  Runners contend with snow on the highest passes and triple-digit heat in the valleys.  The elements pose the risk of heat stroke, hypothermia and altitude sickness.  Other dangers on the trail include wildlife hazards and getting lost.  Twenty-one aid stations and ten major medical checkpoints are positioned along the course, which is marked with pink surveyor’s tape tied to branches to help runners navigate the route.

Our goal: to traverse the Sierra Nevada and the mighty canyons of the American River, arriving in the Gold Rush town of Auburn in under 24 hours.  Our reward: the most coveted emblem of the endurance athlete and symbol of the world’s most demanding sports event – a sterling silver belt buckle that proclaims, ‘100 Miles One Day.’

The 44th running of the Western States 100 will take place in the Sierra Nevada Mountains of California June 29 – 30, 2019.  The 2008 event was canceled due to bad air quality from area wildfires.