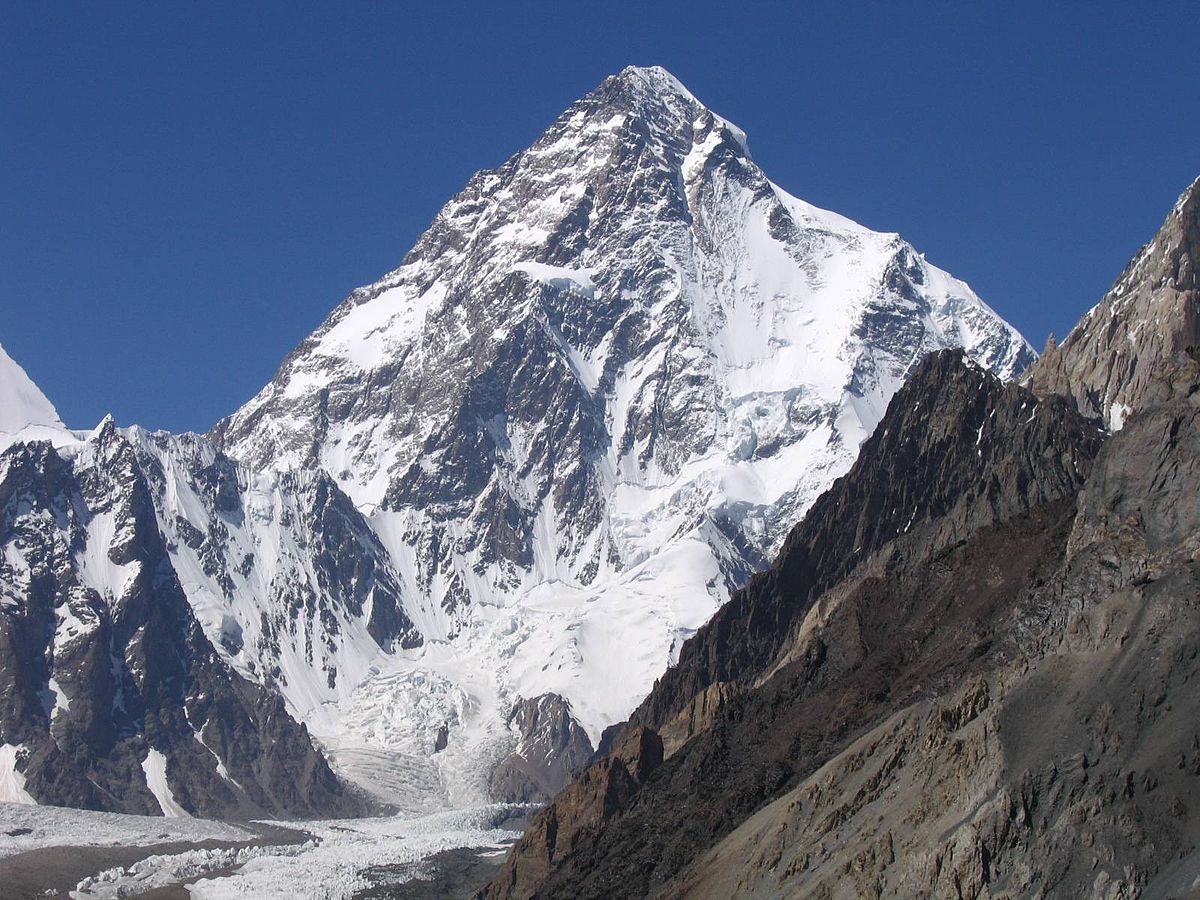 Reaching the summit of K2 in summer is one of the mountaineering’s most deadly and difficult challenges.  Scaling the world’s second highest peak in winter has never been accomplished.

K2, also known as Ketu/Kechu, Mount Godwin-Austen and Chhogori, is 28,251 feet [8,611 meters] above sea level and is located in northern Pakistan, along the China-Pakistan border.  K2 is the highest point of the Karakoram range and is only 778 feet shorter than Mount Everest, the world’s highest mountain.  There are 14 independent mountains on Earth that are more than 8,000 meters [26,247 feet] above sea level—called “eight thousanders”– and all are located in the Himalayan and Karakoram ranges in Asia.  K2, also known as Savage Mountain due to the extreme difficulty of ascent, has the second-highest fatality rate among the eight thousanders, as about one person in four dies while attempting the climb.  Annapurna, located in the Himalayas, is the only mountain with a higher fatality-to-summit rate than K2, with 191 summits and 61 fatalities but, unlike Annapurna, K2 has never been climbed during winter.

The Great Trigonometrical Survey, piloted by George Everest, was a 19th century project designed to measure the height of the Himalayan mountains.  In 1856, British surveyor Lieutenant-Colonel Thomas Montgomerie, working under Mr. Everest, labelled the five most prominent peaks in the Karakoram.  K2 is the second peak of the range [Chhogori means “big mountain” in the Balti language, while K2 is rendered as Kechu or Ketu].  There are three faces to K2.  Two faces are in Pakistan, including the east face, which no one has climbed due to the instability of the snow and dangerous ice formations, and the south face, on the Chinese side.  K2 is a consistently steep pyramid, dropping quickly in almost all directions.  It stands nearly 10,000 feet above much of the glacial valley bottoms at its base, leaving the mountain unprotected from eddies created in the Jetstream.  Sir Chris Bonnington, Britain’s most celebrated mountaineer, notes, “It’s enormous, very high, incredibly steep and much further north than Everest, which means it attracts notoriously bad weather.”   There are ten named routes to the top of K2 and none of them are easy.  The two on the Chinese side are rarely climbed and the most popular route, Abruzzi Bridge, is used 75 percent of the time.  The most significant danger facing climbers is rock fall—which can shoot large and small meteors down narrow gullies–and avalanches.  A huge ice serac looms near the summit and can drop heavy pieces that fall directly on the route.  The weather on K2 is unpredictable.  Strong winds develop quickly and can sweep climbers off the high ridges, while heavy snowfall can destroy fixed lines, accelerate avalanche danger and obliterate escape routes.  Exposed areas make shelter and the ability to retreat from storms, which can last several days, difficult.  “It’s a very serious and dangerous mountain,” according to Bonnington, “No matter which route you take it is a technically difficult climb, much harder than Everest.  Weather can change quickly, storms are becoming more violent, and snow conditions are getting worse.”

On July 31, 1954, Italian mountaineers Lino Lacedelli and Achille Compagnoni became the first to successfully ascend K2.  A second ascent did not occur until 23 years later, by Japan’s Ichiro Yoshizawa, in 1977.  Since then, about 300 people have summited K2, including Wanda Rutkiewicz, the first woman to reach the top, while over 80 climbers have perished.  Steep, icy, avalanche-prone terrain make falls prevalent, while altitude sickness and exhaustion are common causes of fatalities.  There is one-third the amount of oxygen at the summit of K2 than at sea level.  Climbers refer to 26,000 feet elevation as the “death zone,” as the quantity of oxygen at this altitude is insufficient to sustain human life—the body cannot acclimate—and extended stays at this height will result in death.  Mountaineers risk high-altitude pulmonary edema [HAPE]—an accumulation of fluid in the lungs—as well as high-altitude cerebral edema [HACE], where the brain swells with fluid.  Both are deadly.  In any given year, Everest may see 500 successful summits, while K2 may go several years without any, including 2005, 2009, 2010 and 2013.  Climbers on K2 have always been completely self-reliant but, beginning in 2014, professional guide companies introduced the model at K2 that has been used on Everest for decades—bringing a team of highly skilled Sherpas to fix lines, break trail and ferry gear.  K2 is considered the “mountaineer’s mountain” but that is changing, as a record 60 climbers—led by American guide companies–attempted to ascend in 2014.  Last year, that number more than doubled.

“Everest and K2 aren’t even the same sport”