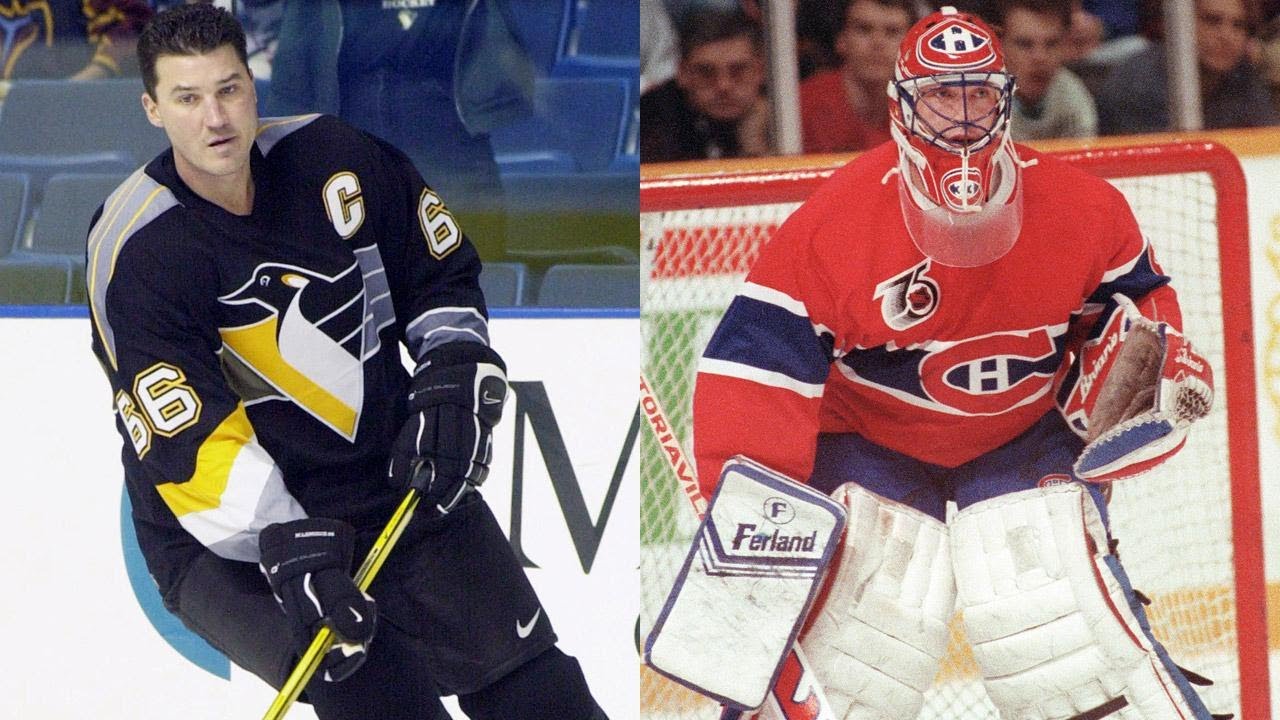 Two of the greatest hockey players of all time were born 200 kilometres apart on this date in 1965.

Mario Lemieux [lah-MEW] is universally considered one of the five best players in NHL history. Where would he be ranked had he not missed 513 of a possible 1,428 games during his remarkable career? Born in Montreal, he was a star amateur player and was selected by the Pittsburgh Penguins with the first selection of the 1984 NHL Draft, which also included Patrick Roy, Brett Hull, Luc Robitelle, Gary Suter and baseball Hall of Famer Tom Glavine. His impact on the league was immediate, as he took the puck from legendary Boston Bruins defenceman Ray Borque on his very first NHL shift and scored a goal with his first career shot. He was the first rookie to be named MVP of the All-Star game later that year and went on to earn Rookie of the Year honors for the 1984-85 season.

“Super Mario” had extraordinary skills for a man of his size [6’4”, 235] and Bobby Orr called him “the most talented player I’ve ever seen”. He led the Penguins to back-to-back Stanley Cup championships in 1991 and 1992 but was plagued by injuries, including a spinal disc herniation, Hodgkin’s lymphoma, hip tendinitis and chronic back pain so severe that others had to tie his skates for him. Despite all of this, Lemieux was three time league MVP, led the NHL in scoring six times, was twice the MVP of the Stanley Cup playoffs, and was four times selected by his peers as the most outstanding player in hockey. He led Team Canada to gold medals in the 2002 Olympics, 2004 World Cup and 1987 Canada Cup. He bought the Penguins and their top minor league affiliate in 1999 and, after the Pens won the Stanley Cup in 2009, became the first person to have his name engraved on the trophy as both player and owner.

Mr. Lemieux had his # 66 sweater retired by the Penguins and Team Canada and was immediately inducted into the Hockey Hall of Fame upon his initial retirement in 1997.

Patrick Jacques Roy was born in Quebec City but grew up in Cap-Rouge, Quebec. He was selected fifty places behind Mario Lemieux in the 1984 NHL Draft by the Montreal Canadiens and quickly made his mark, becoming the youngest Conn Smythe Trophy winner as playoff MVP in history at age 20. Roy played for the Canadiens for 10 years and led them to two Stanley Cup championships, in 1986 and 1993. “Saint Patrick” was traded to the Colorado Avalanche, who were playing their first season in Denver after their move from Quebec, mid-way into the 1995-96 season. Roy led the Avalanche to their first Stanley Cup title and repeated that feat in 2001.

He is the only player to win the Conn Smythe three times, in two different decades, for two different teams [1986, 1993 ,2001] and is the NHL’s all-time leader in playoff games played [247 and wins [151] by a goaltender. He was an 11 time All-Star and won the Vezina Trophy as top goaltender three times. The Canadiens and Avalanche both have retired his # 33 sweater, making him one of only six players in league history to have their sweaters retired by two different teams. Mr. Roy was inducted into the Hockey Hall of Fame in 2006, his first year of eligibility. He is currently Head Coach and VP of Hockey Operations for the Colorado Avalanche and in 2014 received the Jack Adams Award as the NHL’s top coach.