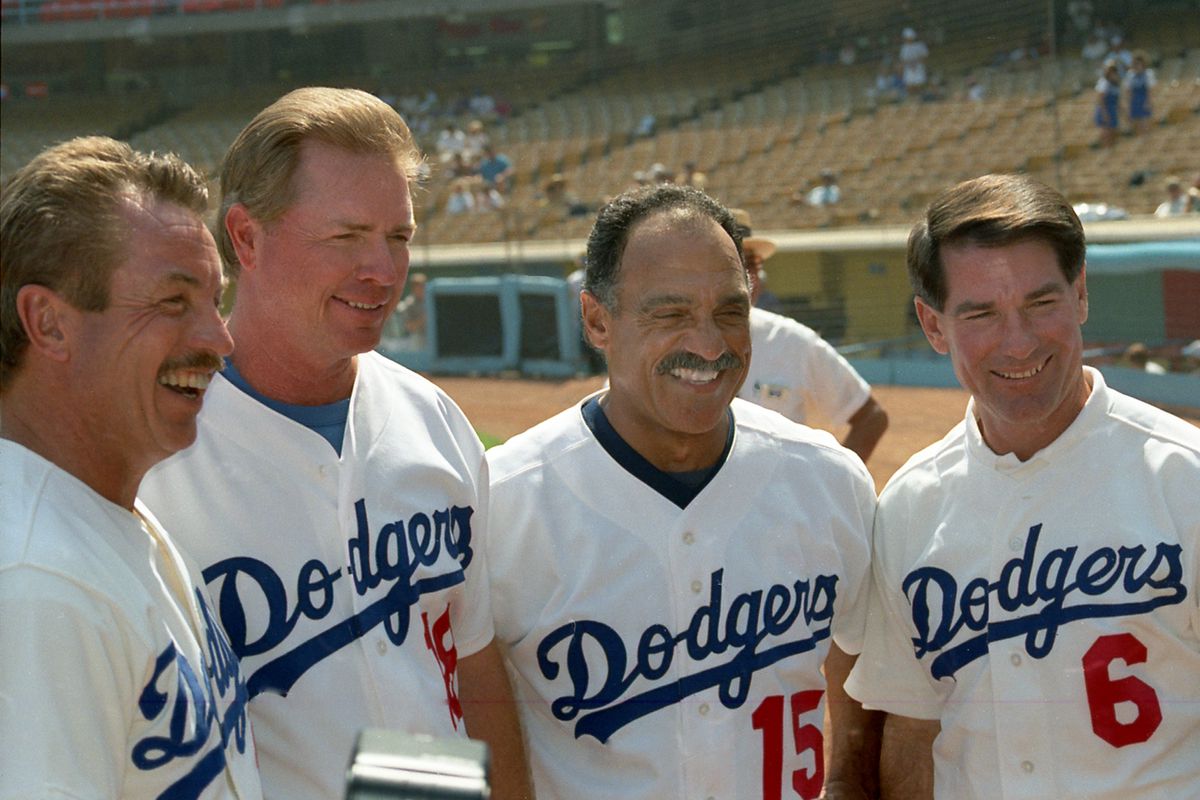 The Los Angeles Dodgers infield of the 1970s played over eight seasons together, more than any quartet in baseball history.

Ron Cey, Bill Russell, Davey Lopes and Steve Garvey played together as an infield for a big league-record 833 games.  In those starts, the Dodgers went 498-335 for a winning percentage of .598. — the equivalent of going 97-65 over a season.  Although all four came up through the L.A. farm system, they never played together in the minors.  The disco-era Dodgers infield endured like no other in history.  Los Angeles laid the groundwork for their championship clubs of the 1970s in the 1968 Amateur draft, when they selected Garvey, Lopes and Cey.  The fabulous foursome first appeared in the same lineup in June 1973.  By the time the Dodgers defeated the New York Yankees in Game Six of the 1981 World Series at Yankee Stadium, the foursome had combined for 21 All-Star Game appearances, four National League pennants and a world championship.

In June 1973, the Dodgers were being blown out in Philadelphia in a game the Phillies would go on to win, 16-3.  In the fourth inning, L.A. manager Walter Alston decided to give young Steve Garvey a try and sent in the 24-year-old as a defensive replacement at first base.  It marked the first time the quartet played collectively at the positions that would define them.  Ten days later, in the second game of a doubleheader against the Cincinnati Reds at Dodger Stadium, they all started and remained together for the next eight seasons.

The Los Angeles Dodgers drafted Bill Russell out of tiny Pittsburg High School in southeastern Kansas in 1966.  The first of the quartet to make it to the big leagues, he debuted in 1969 and played outfield and second base in his first three seasons with the Dodgers.  In 1972, he replaced the great Maury Wills and was the club’s everyday shortstop for the next eleven years.  A three-time All-Star, Russell played his entire 18-year career with Los Angeles.  Only Zack Wheat played more games as a Dodger, and no one has played more games with the club since their move to California in 1958.  After retiring as a player in 1986, Russell joined the coaching staff and managed the Dodgers from 1996 to 1998.

Steve Garvey broke into the major leagues as a third baseman, but a shoulder injury suffered while playing defensive back at Michigan State affected his throwing.  He committed a major league-leading 28 errors in 85 games in his second full season in 1972.  On June 23, 1973, after the Reds had beaten the Dodgers in the first game of a twin-bill, Garvey started at first base in place of Bill Buckner, who was moved to the outfield.  By 1974, he had become National League MVP and helped lead the Dodgers to the World Series, where they lost to the Oakland A’s.  On September 3, 1975, Garvey played in the first of an NL-record 1,207 consecutive games, the fourth-longest streak in major league history.  A ten-time All-Star, “Mr. Clean” signed with the San Diego Padres after the 1982 season, where he won four Gold Glove Awards and helped the Padres to the 1984 World Series.

The Dodgers selected Washington State’s Ron Cey in the third round of the 1968 amateur draft.  After making his big league debut in September 1971, the power hitter seized a starting spot a week into the 1973 season and became a fixture at third base for a decade.  A six-time All-Star, Cey helped make baseball history in 1977.  He, Garvey and outfielders Reggie Smith and Dusty Baker each hit at least 30 home runs, the first time four teammates had done that in the same season.  A superb fielder who was overshadowed by Mike Schmitt for Gold Glove honors, Cey was named co-MVP of the 1981 World Series after batting .350 and driving in six runs as the Dodgers downed the New York Yankees in six games.  “The Penguin” was traded to the Chicago Cubs after the 1982 season and played five more years, finishing with Oakland in 1987.

Davey Lopes was in his mid-20s and playing centerfield for Triple-A Spokane when manager Tommy Lasorda asked him about moving to second base.  “I thought he was crazy,” said Lopes.  “I didn’t want to do it.”  After stumbling initially, he broke into the majors in 1972.  An all-time great late bloomer, Lopes became the Dodgers starting second baseman less than two weeks after Cey grabbed the third-base job in April 1973.  A rare blend of speed and power, Lopes twice led the NL in stolen bases and clouted 28 homers in 1979.  He played in four straight All-Star Games between 1978 and 1981 and was a superb lead-off man, setting the table for Garvey and Cey.  In 1975, Lopes stole 38 straight bases without being caught, breaking a record that stood for half a century.  He played 16 major league seasons and managed the Milwaukee Brewers for two years before rejoining the Dodgers first base coach from 2011 through 2015.

After the 1981 season, the Dodgers broke up the band.  Lopes departed for Oakland.  A year later, both Garvey and Cey left, leaving only Russell, who played some outfield and second base in his final few seasons in Los Angeles.  In their eight-plus seasons together, the quartet played in four World Series and finished first or second in the NL West in every season but one.  The fabulous foursome, whom Russell called a “band of brothers,” made baseball history.

The Dodgers of the 1970s were arguably the best infield in history.  Free agency makes it improbable that any group will ever approach their longevity  “I wouldn’t think,” Tommy Lasorda said, “it could ever happen again.”  The Dodgers long-standing infield endured because of solid individual and team performances, durability, and the closeness in age of the four players.  Born in 1945, Lopes was the oldest of the group.  Cey, Russell and Garvey were all born within ten months of one another, in 1948.  “I’m extremely proud of what they brought into my life,” said Lopes, “and that we can say, as a group, we lasted and accomplished something that no one in the game has come close to accomplishing again.”

On this date in 1973, Ron Cey, Bill Russell, Davey Lopes and Steve Garvey played together in the Los Angeles Dodgers infield for the first time.