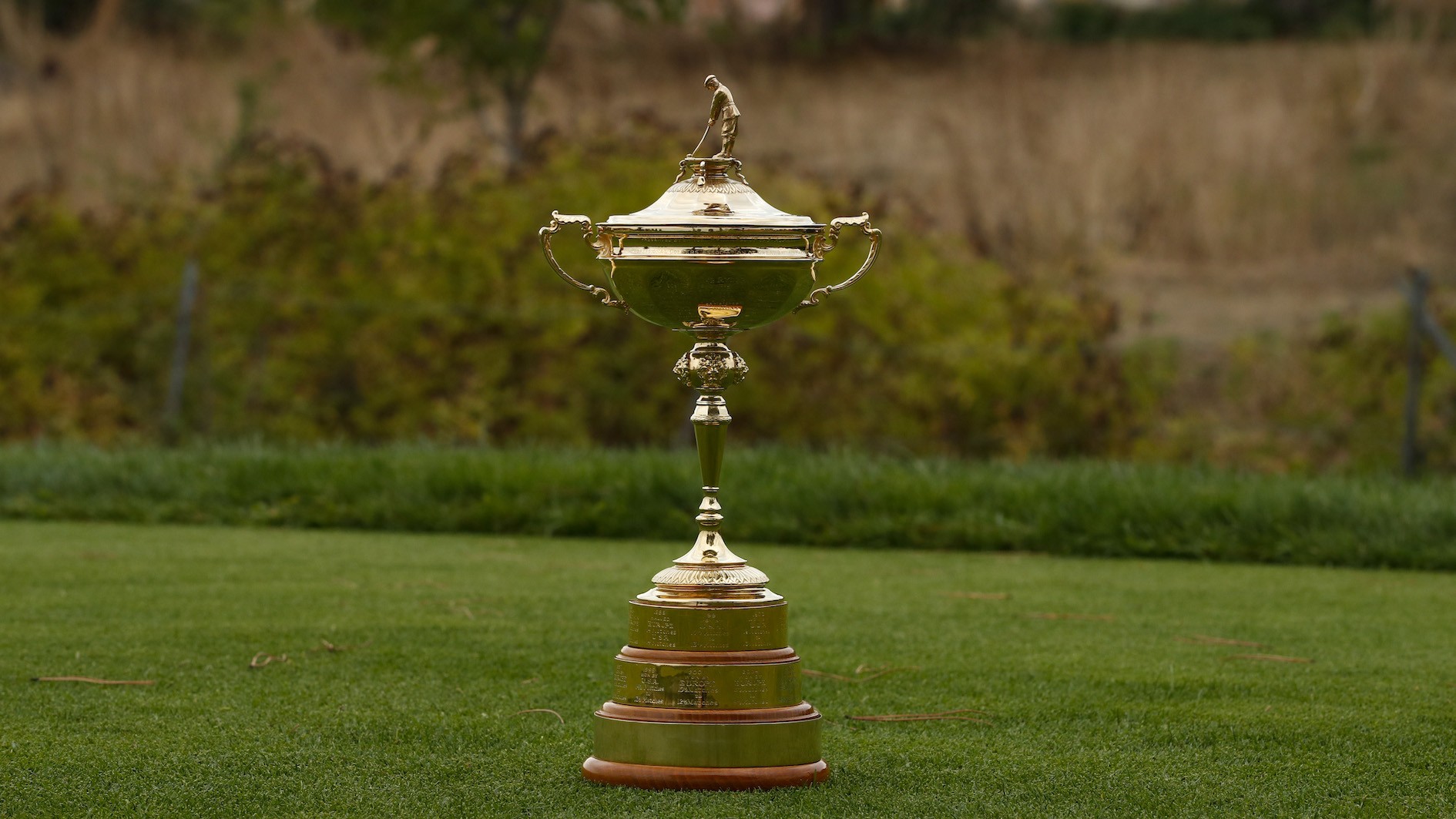 The Ryder Cup is one of the last great sporting events founded on prestige rather than prize money.

The Ryder Cup is a biennial men’s golf competition between teams from the United States and Europe.  The event is jointly administered by the PGA of America and Ryder Cup Europe, with the venue alternating between courses on the two participants’ continents.  In September 1920, Golf Illustrated suggested to the PGA of America that a team of Americans be chosen to play in the following year’s Open Championship, which had never been won by an American.  Two weeks prior to the 1921 Open, a dozen American professional golfers arrived in England, where they played an unofficial match against pros from Great Britain at Gleneagles.  The Brits won.  A second match took place at Wentworth four years later, with Abe Mitchell leading Great Britain to another victory.  English seed merchant Samuel Ryder, who had taken up golf late in life and hired Mitchell as his coach, had sponsored the match.  “We must do this again,” said Ryder in the bar after the competition.  He donated a trophy—atop which sits the likeness of Abe Mitchell– and the Ryder Cup was born.

Officially contested for the first time in 1927, the original Ryder Cup matches pitted the United States against Great Britain and Ireland.  The inaugural event, held at Worcester Country Club in Massachusetts, was won by the U.S., 9 ½ to 2 ½.  British captain Ted Ray, who had won the U.S. Open in 1920, cited “superior putting” by the Americans as their reason for victory.  The home team won the first five contests before the Second World War, an event that led to the cancellation of the matches between 1939 and 1945.  The competition resumed after the war, with the U.S. winning 18 of the next 19 matches—often by lopsided margins–leading to a decision to include continental Europe beginning in 1979.  The change came about from a discussion in 1977 between Jack Nicklaus, who played on six U.S. Ryder Cup teams during his hall of fame career, and British PGA President Lord Derby.  “It is vital to widen the selection procedures if the Ryder Cup is to continue to enjoy its past prestige,” observed Nicklaus.  The changes were approved by descendants of the Samuel Ryder family and bolstered the competition to its present day popularity.  Since 1979, Europe has won the Cup eleven times, while America has won seven events.

Each side’s squad includes 12 players.  The competition involves 28 matches, all played over 18 holes.  The format is match play, where the winner of each match earns a point for his team, with a half-point awarded each for any match ending in a tie.  The winning team is determined by cumulative point totals.  In the event of a tie [14 points each], the Ryder Cup is retained by the team who held it before the contest.  The three-day competition is held over a weekend, with four foursomes and four four-ball matches taking place both Friday and Saturday.  The foursome format involves two members from each team playing alternate shots, while four-ball has two players from each team playing their own ball.  In four-ball, the player completing the hole in the fewest shots wins the hole.  If teams tie for a hole, the point is divided between the teams.  The squad that earns the most points over the 18-hole match is awarded a Ryder Cup point.  Sunday’s format involves 12 singles matches.  Not everyone plays on Friday and Saturday, as each team’s captain select which eight will compete, but all dozen members of each Ryder Cup team play singles on Sunday.

The European team has included players from eleven countries, with England’s Nick Faldo making the most appearances [11] and earning the most points [25] of any player in history.  The most points by a pairing is 12, achieved by Seve Ballesteros [Daily Dose, 9/18/15] and Jose-Maria Olazabal of Spain. Europe’s Sergio Garcia competed in his first Ryder Cup at 19, making him the youngest player in the event’s history.  American Raymond Floyd, at 51, is the oldest.

Players receive no prize money in Ryder Cup competition.  They play for team, pride and country.  The matches provide incredible golf, drama, camaraderie, and sportsmanship.  The 1969 event was the closest Ryder Cup yet.  The teams were tied with the last match on the final hole.  Tony Jacklin, who two months prior had become the first Brit in 18 years to win the Open Championship, faced Nicklaus, who was playing his first Ryder Cup.  Nicklaus holed a clutch four-foot par putt to force Jacklin to match him with a short par putt of his own.  Rather than give Jacklin a chance to miss, the Golden Bear graciously conceded the putt, resulting in the first tie in Ryder Cup history.  Nicklaus’ sportsmanly display came to be known as “The Gesture.”  The matches also produce controversy.  After winning close competitions in 1995 and 1997, Europe held a 10-6 lead going into Sunday’s singles matches at The Country Club in Brookline, Massachusetts in 1999.  After U.S. captain Ben Crenshaw [Daily Dose, 1/11/16] front-loaded his best players into the lineup, the Americans won the first seven matches.  American Justin Leonard, needing a halve in his match against Olazabal to secure the Cup, drained a dramatic 45-foot birdie putt on the 17th green to clinch the greatest final-day comeback in Ryder Cup history.  Oblivious to the fact that Olazabal had yet to putt, the Americans stormed the green, piling on Leonard like a baseball team that had just won the World Series.  After the green was cleared and the madness subsided, Olazabal’s birdie attempt barely missed, giving the U.S. a 14 ½ to 13 ½ victory.  Many viewed the behavior of the U.S. team as appalling sportsmanship.  European co-captain Sam Torrance went so far as to call the American’s conduct “disgusting.”

The United States has won 25 of 40 Ryder Cup competitions.  In the 18 matches since the change in format in 1979, Europe has won eleven, including the last three in a row.  The 2016 Ryder Cup matches will be held this coming weekend, September 30-October 2, at Hazeltine Golf Club outside Minneapolis.

The Daily Dose would like to recognize Mr. Arnold Palmer [Daily Dose, 7/1/16] as the most important golfer in American history and a great ambassador for the game he loved.

This is an important date in American Ryder Cup history.  In 1993, Davis Love III beat Constantino Rocca at the last hole to give the U.S a 15-13 victory, the last time America has won the Ryder Cup in Europe.  After Europe won the next two competitions, Justin Leonard sank his 45-foot putt in 1999 to allow the U.S. to reclaim the Ryder Cup in the “Battle of Brookline.”