12 Athletes Whose Performance Changed the Rules of the Game 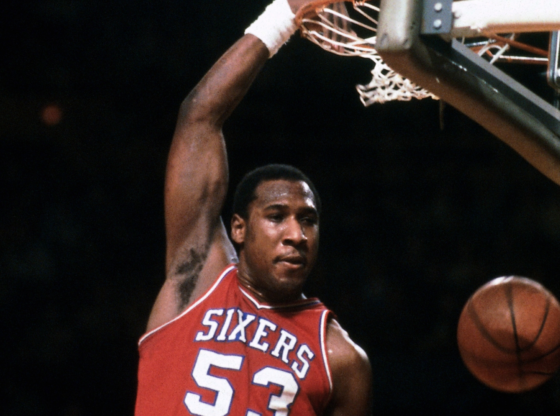 In the world of sports, defining greatness is often a difficult proposition.

Is Hall of Fame induction adequate proof?  Not always, as evidenced by the inclusion of Harold Baines and Bruce Sutter in Cooperstown.  Are statistics the standard?  No, they can be skewed, whether it’s by the juiced baseball currently used by MLB or the restrictions placed on defensive players in the pass-happy NFL.  How about the good old-fashioned eye test?  Anyone who’s seen Dan Marino throw a football or LeBron play in person has undoubtedly witnessed brilliance.

But there is one way to measure greatness that cannot be argued with: players who altered the game so much that the rules had to be changed in order to neutralize them.

Today we feature a dozen athletes whose performance forced the rules of their sport to be changed.

In 1979, Philadelphia 76ers center Darryl Dawkins threw down two dunks three weeks apart so powerful they shattered the backboard glass.  The NBA responded by announcing that breaking the backboard glass was now against the rules and offending players would be subject to a fine and suspension. The league ultimately moved to breakaway rims to ensure that Chocolate Thunder could not destroy any more backboards.

In the early 1900s, Chicago White Sox right-hander Ed Walsh compiled a minuscule career ERA of 1.82, which remains the lowest in MLB history. Walsh was dominant, in part, due to his spitball, which was nearly unhittable because of its unpredictable flight path.  Baseball outlawed the spitter in 1920, while Big Ed landed in the Baseball Hall of Fame 26 years later.

Shaquille O’Neal was the most dominant big man of his era.  His only weakness was free throw shooting, as the Big Aristotle averaged just over 52 percent for his career.  To keep him at bay, opposing teams employed a Hack-a-Shaq strategy, purposefully fouling the big man before he got the ball to send him to the line.  In 2016, the NBA adopted a rule stating players could not intentionally foul opponents that didn’t have the ball during the last two minutes of the game or they would reward the opposing team two free throws and the ball.

At a Chicago Blackhawks practice in 1963, Stan Mikita accidentally broke his stick.  Without pausing to get a new piece of lumber, the hall of fame centerman discovered that his shot was faster and more accurate with the crooked blade.  Soon he and teammate Bobby Hull were soaking their wooden blades in hot water and wedging them under door jambs overnight to create what came to be known as the banana blade.  Mikita and Hull were in the top ten in scoring for eight straight seasons and finished 1-2 three times.  In 1969, the NHL implemented limits on blade curvature.

George Mikan was basketball’s first great big man.  While at DePaul the 6’10” center would catch an opponent’s shot on its downward path to the basket, causing the NCAA to ban goaltending in 1945.  Mikan was such a force in the NBA that, in 1951, the league widened the lane from six to 12 feet.  The stalling tactics employed by opponents to keep the ball away from Big George eventually led to the implementation of the 24-second clock and, in 1954, the NBA experimented with a 12-foot-high basket for one game in an attempt to control Mikan.

Bob Gibson was one of the most dominant and intimidating pitchers ever to toe the rubber.  In 1968, Gibby threw 28 complete games in 34 starts and won 22 – including 13 shutouts.  During one stretch, Gibson won 12 in a row while allowing only six earned runs in 108 innings pitched [a 0.50 ERA]. He was not removed from the mound for another pitcher for the entire season and conceded only 38 earned runs all year.  After the great Bob Gibson posted a 1.12 ERA and earned the 1968 NL MVP, Cy Young, and Gold Glove Awards, Major League Baseball lowered the pitching mound from 15 inches to its present-day ten.

Bad, bad Leroy Edwards was so powerful in the early days of the National Basketball League that the circuit incorporated the Three Second Rule in 1936.  It forced the 6’5″ center out of the lane and away from the basket. Edwards played only one varsity season at Kentucky before turning pro — a disturbing trend that continues today.  The legendary Adolph Rupp, who won 876 games in 41 years in Lexington, said Leroy Edwards was the strongest and finest center he had ever seen play the game.

At the 1997 Masters, Tiger Woods lapped the field, capturing his first Green Jacket by a whopping 12 shots.  During his 18-under-par romp, Woods hit wedges into all the par-5s.  The folks at Augusta National didn’t take too kindly to seeing their hallowed golf course brought to its knees and decided on modifications.  The course was lengthened significantly prior to the 2002 Masters.  To Tiger-proof Augusta, the competition committee planted additional trees, narrowed the fairways and grew the rough. The changes penalized the rest of the field and rewarded Woods, as the best player in the world went on to win four more Masters titles.

Wilt Chamberlain is arguably not only the best basketball player of all time, he is one of the greatest athletes in history.  Wilt was so unstoppable that the NBA instituted several rule changes aimed at neutralizing him.  The league widened the lane again, from 12 to 16 feet, and banned offensive goal tending.  They disallowed in-bounding the ball over the backboard and outlawed a free throw shooter from crossing the foul line before the ball touched the rim.  The supremely-gifted Chamberlain would simply leap from behind the foul line to either dunk the ball or lay it in from close range.  The rule change worked, as the Big Dipper shot just 51 percent from the charity stripe over the course of his brilliant career.

Martin Brodeur is undoubtedly one of the greatest goaltenders in hockey history, in part because he handled the puck better than any net-minder who has ever played the game.  Brodeur’s brilliance with the biscuit allowed him to serve as a sort of third defenseman, prompting the NHL to limit the area in which the goaltender is allowed the handle the puck.  In 2005, the trapezoid was implemented behind the net, a designated zone outside of which the goalie cannot handle the puck.

Lew Alcindor was the most dominant force on the most dominant team in NCAA history.  He and his UCLA Bruins were unstoppable, winning national titles in all three of his varsity seasons.  The seven-foot Alcindor could place the ball over the rim and throw it through with such ease that the NCAA banned the dunk shot in 1967.  The rule made Big Lew a more well-rounded player.  He went from one unstoppable shot to another, perfecting the skyhook that led to him becoming the NBA’s all-time leading scorer.  Thankfully, the NCAA came to its senses and reinstituted dunking in 1976.

Fran Tarkenton was so adept at scrambling that teams often lost sight of him.  Unfortunately, so did the officials.  In 1965, the NFL added a sixth official – the line judge – to ensure passers remained behind the line of scrimmage before releasing the football.