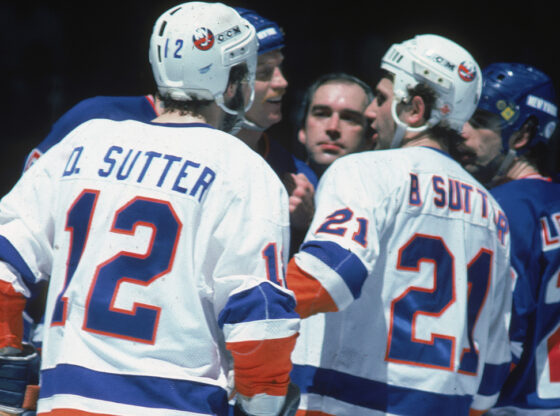 The Sutter family is one of the most storied families in National Hockey League history.

While baseball has the Molina brothers and football has the Mannings, no sport has family connections quite like hockey.  Bobby and Dennis Hull skated together for eight seasons in Chicago.  The Espositos dominated on both ends of the ice – Phil pouring pucks into the net and Tony denying them on the other end.  Maurice “Rocket” Richard was the first to score 50 goals in a season.  His younger brother, Henri, was the Pocket Rocket who helped the Montreal Canadiens to 11 Stanley Cups.  And Gordie Howe played with his sons, Mark and Marty, and are the only father-son combo to play together in the NHL.

But no family can match the Sutters – the First Family of Hockey.

Six brothers: Brent, Brian, Darryl, Duane, Rich and Ron, reached the NHL.  For five seasons in the 1980s, they all played in the league.  Four went on to become coaches and general managers.  The first generation of Sutters [more on the second generation later] had a least one brother playing in the NHL for 24 seasons, from 1976 to 2001.  All the brothers played either for the Chicago Black Hawks or St. Louis Blues at one point or another, and all six played in the league in both the 1982-83 and 1986-87 seasons.

The legendary family first gained notoriety in the middle of 19th century America.  Great-great uncle John Augustus Sutter changed the course of U.S. history when gold was discovered at his California sawmill in 1848, leading to the Gold Rush.

Collectively, the Sutter brothers played nearly 5,000 NHL regular-season games and over 600 more in the playoffs.  They combined for 1,320 goals, 1,615 assists and 7,224 penalty minutes.  The Sutters have won eight Stanley Cups.  Duane won the Cup in each of his first four seasons with the New York Islanders.  Brent joined him on Long Island and won championships in 1982 and 1983.  Darryl has reached the Stanley Cup Finals three times as head coach, winning twice.

All six brothers took the same path to the NHL.  Each began his junior career with the Red Deer Rustlers of the Alberta Junior Hockey League before moving to the Western Hockey League’s Lethbridge Broncos.  The 20th overall pick of the St. Louis Blues in 1976, Brian was the first Sutter to enter the NHL.  The three-time All-Star played a dozen seasons, all with St. Louis, who retired his number 11.  Brian later served as head coach of the Blues, Black Hawks, Boston Bruins, and Calgary Flames.  He won the Jack Adams Award as the best coach in the NHL in 1991 and was runner-up with Boston in 1993 and Chicago in 2002.

Duane Sutter was a first-round pick of the Islanders in 1979.  His brother, Brent, was drafted 17th overall by the Islanders one year later.  Brent had the most success in the NHL, playing 1,111 games and recording 829 points before landing in the Hockey Hall of Fame.

Born December 2, 1963, Ron is the highest draft pick of the family, taken fourth overall by the Philadelphia Flyers in 1982.  His twin brother, Rich, was selected six spots later by Pittsburgh.  Rich and Ron spent three seasons together with the Flyers in the mid-1980s and three more with the Blues in the early 1990s.  Ron was coached by older brother Darryl with the San Jose Sharks in the late 1990s and is the last brother to retire from the NHL.

Darryl was the lowest draft pick of the family, not going until the 11th round [179 overall] to Chicago, in 1978.  His career was cut short by injuries in 1987 after which he turned to coaching.  Darryl Sutter served as head coach of the Black Hawks, San Jose Sharks, and Calgary.  All but Rich and Gary worked alongside Darryl in some capacity during his tenure with the Flames.  Darryl later led the Los Angeles Kings to the only Stanley Cups in franchise history, in 2012 and 2014.

Brian, Darryl and Brent each had stints as head coach of the Calgary Flames.

Grace and Louie Sutter raised seven sons in a four-bedroom farmhouse in Viking, Alberta — about 75 miles southeast of Edmonton.  The eldest, Gary, was allegedly the best hockey player of the bunch.  Rather than pursuing a career in the NHL, Gary stayed home to work on the family farm.

A second generation of Sutters has been drafted into NHL.  Brian’s son, Shaun, was a fourth-round draft choice of the Calgary Flames in 1998 and is now assistant GM of the Red Deer Rebels of the WHL.  Brent’s son, Brandon, was the 11th overall pick of the Carolina Hurricanes in 2007.  The 6’3” center is currently the alternate captain for the Vancouver Canucks.  Duane’s son, Brody, was taken by Carolina in 2011 and is currently playing in Finland.  Rich’s son, Lukas, was drafted by Winnipeg in 2012 while Ron’s son, Riley, was selected by the Washington Capitals in 2018.  Brett Sutter was the 179th overall selection by Calgary in 2005.  Coincidentally, his father, Darryl, was also taken 179th by the Black Hawks 27 years earlier, in 1978.

Brett, Brandon and Brody are all centermen.  Each were members of the Carolina Hurricanes at one point, with Brandon and Brett Sutter playing in Carolina together from 2010 to 2012.

On this date in 1982, Brian Sutter scored a goal for the St. Louis Blues at 13:30 of the first period in a game against the Islanders at Nassau Coliseum in New York.  It was the left-winger’s 11th goal of the season and tied the game at 2-2.  Led by Duane Sutter, the Islanders won the contest, 9-2, in a season that would see them win their third straight Stanley Cup.