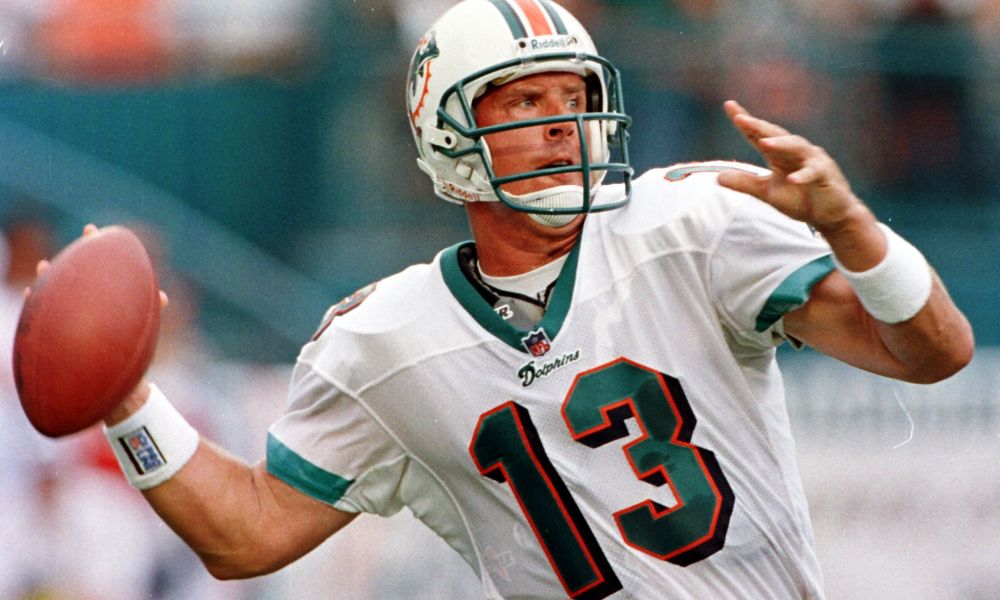 Daniel Constantine Marino, Jr. is the greatest quarterback in the history of football to have never won a Super Bowl.

Born in Pittsburgh, Pennsylvania on September 15, 1961 as the oldest of three children born into an Italian-Polish family, the family lived in the South Oakland neighborhood where his father delivered newspapers for the Pittsburgh Post-Gazette. Dan attended Central Catholic High School in Pittsburgh, an all-boys Catholic college preparatory school, and played baseball and football for the Vikings. Like fellow Central Catholic alum “Sudden” Sam McDowell, he was a dominant pitcher. The Kansas City Royals thought he was so good that they selected him in the 4th round of the 1979 amateur draft. He was also named to the Parade All-American football team along with future NFL Hall of Famers John Elway [Daily Dose, June 26] and Eric Dickerson. Marino chose football over baseball and accepted a scholarship to the University of Pittsburgh, where he earned the starting quarterback job part way into his freshman year and led the Panthers to an 11-1 record and a 16-10 victory over Arizona in the Fiesta Bowl. Pitt went 11-1 in his sophomore season and ended the year ranked #2 in the nation after walloping South Carolina, 37-9, in the Gator Bowl. In 1981, Marino’s junior year, Pitt was ranked # 1 most of the season and went 11-1 after a last-minute win over Georgia, 24-20, in the Sugar Bowl to finish the year ranked #4. Marino finished fourth in the voting for Heisman Trophy that year and had now led Pitt to 33 wins against 3 losses and Top Five finishes in his first three college seasons. His senior season was disappointing, as Pitt finished 9-3, including losses in their final two games of the year to fall to # 10 in the rankings. He finished his four college seasons with 7,905 passing yards, 74 touchdowns and 64 interceptions and rumors of drug use began to surface.

The 1983 NFL Draft featured what has come to be known as the “quarterback class of 1983”, as six signal callers were taken in the first round, an unusually high number. Of these, four played in the Super Bowl, four played in the Pro Bowl and three have been inducted into the Pro Football Hall of Fame. Dan Marino was considered at the top of this class but, due to the drug rumors, he was the sixth quarterback selected when the Miami Dolphins took him with the 27th overall pick. He was also the first draft pick in the history of the now-defunct United States Football League when he was selected by the Los Angeles Express. Marino chose the NFL and was given his first start in Week 6 of his rookie year, becoming an instant success in leading the AFC in passing, playing in the Pro Bowl and being named NFL Rookie of the Year. The following year was the best of his career, as he broke six NFL records, including most TD passes [48] and passing yards [5,084] as the Dolphins finished 14-2. Marino threw for an AFC Championship Game record 421 yards and 4 TDs in a win over Pittsburgh, both of which stand today, setting up a Super Bowl showdown against Joe Montana and the San Francisco 49ers, who finished the season 15-1. The Dolphins lost, 38-16, in what would the only Super Bowl appearance of Mr. Marino’s 17 year NFL career. He was named MVP, All-Pro and Player of the Year for the 1984 season. The following year, he put the only blemish on the otherwise-perfect record of the Super Bowl champion Chicago Bears and led Miami to the AFC Championship game, which they lost to New England. He would guide the Dolphins to the playoffs seven more times in his career but the title always eluded him.

Dan Marino had one of the quickest releases and strongest arms of any quarterback ever to play the position. He led Miami to the playoffs in 10 of his 17 seasons and set 31 team records. At the time of his retirement in 1999, he tied or held over 47 NFL records and still holds over a dozen of them today. He started in 240 NFL games and has thrown for over 400 yards per game more times than any player in history. Twelve times the Dolphins voted him team MVP and he has had his # 13 jersey retired by the University of Pittsburgh and the Dolphins. Mr. Marino was elected into the College Football Hall of Fame in 2002 and Pro Football Hall of Fame in 2005. NFL.com rated him the #25 player of all time in 2009.