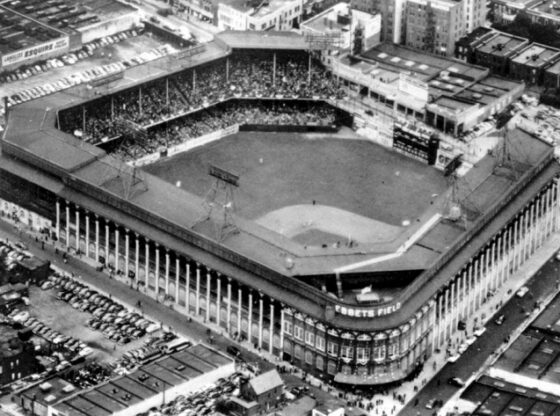 One of the greatest stadiums in the history of American sports stood on what was once a garbage dump.

Brooklyn Dodgers owner, Charlie Ebbets, needed a new home for his baseball team after their old venue, Washington Park, burned down. In 1908, Mr. Ebbets began buying parcels of land in Pigtown, a run-down area of Brooklyn that had gained its name from the pigs that used to eat the garbage that was dumped there. Four years later, the Dodgers owner had acquired the entire block bordered by Beford Avenue, Sullivan Place, McKeever Place and Montgomery Street and construction got underway on a new ballpark on March 14, 1912, about one month before the sinking of RMS Titanic. The stadium sat virtually alone amid a vacant expanse of undeveloped land in Brooklyn’s Flatbush section and was built for $ 750,000 [nearly $18 million today]. Ebbets Field formally opened on April 9, 1913 when the Dodgers played host to the Philadelphia Phillies before 10,000 paying customers. The visitors won, 1-0, and would go on to finish in second place in the National League, 12.5 games back of the New York Giants, while the Dodgers went 65-84 on the season to finish 34.5 games behind. The 18,000 seat park opened without a flag or press box, which was not added until 1929, and offered no seating in left or centerfield. Ebbets Field was built on a sloping piece of ground, as the right field corner was above street level while the left field corner was below street level. In 1914, seating capacity was expanded from 18,000 to 30,000.

Ebbets Field opened one year after Boston’s Fenway Park and Detroit’s Navin Field [later Tiger Stadium] and its intimate configuration led baseball writers to refer to the park as a “bandbox.” The distance from home plate to the left field foul pole was 348 feet, while the right field foul line was only 297 feet away. Dead center field was a monstrous 484 feet from the plate. The distance to left-centerfield was 351 feet and right-center 344 feet away. The Dodgers won pennants in their new home in 1916 and 1920 before falling into decline in the 1920s and 30s. The ball park hosted Manhattan College’s football team from 1932-1937 and was the home field of the NFL’s New York Brickley Giants [1921] and Brooklyn Lions [1926]. Ebbets Field twice hosted Dodger football teams—the NFL’s Brooklyn club [1930-44] and AAFC’s Brooklyn squad [1946-48]. The venerable stadium hosted its first night game on June 15, 1938 when Cincinatti’s Johnny Vander Meer pitched his second consecutive no-hitter against the Dodgers before 38,748 fans. It remains the only time in MLB history that a pitcher has thrown back-to-back no-hitters. The Reds and Dodgers made history again when they played in the first televised game in baseball history on August 26, 1939 in Flatbush. Two months later, Ebbets Field hosted pro football’s first televised game when Dodgers hosted the Philadelphia Eagles before 13,050 patrons. Not to be outdone, the first televised soccer match occurred at Ebbets Field in June of 1947.

Ebbets Field hosted Major League Baseball’s All-Star Game on June 17, 1949 and was first and foremost known as a baseball venue, as the Dodgers called the park home from 1913 to 1957. The “Bums” won National League pennants there in 1941, ’47, ’49, ’52, ’53, ’55 and ’56. The Brooklyn Dodgers won the only World Series title in team history in 1955, beating the New York Yankees in seven games. Games Three, Four and Five were played at Ebbets Field. Perhaps the most significant event ever to take place at Ebbets Field occurred on April 15, 1947, when Jackie Robinson made his major league debut before 26,623 spectators to become the first African American to play in the major leagues in the modern era.

Baseball’s popularity in America during the 1950s led to the demise of Ebbets Field, as the 31,902 seat park and its surrounding neighborhood had no option for expansion. The stadium had no room for automobile parking and Dodgers owner Walter O’Malley sought to build a domed stadium at the Atlantic Yards in Brooklyn. New York City Building Commissioner Robert Moses refused to help O’Malley with the move, insisting instead that the Dodgers move to a city-owned stadium in Queens [the future site of Shea Stadium and Citi Field]. O’Malley refused to budge, stating, “We are the Brooklyn Dodgers, not the Queens Dodgers” and began to consider other options, ultimately choosing to move to Los Angeles following the 1957 season. Mr. O’Malley convinced New York Giants owner Horace Stoneham, who was having stadium difficulties of his own, to move west as well, and the Giants also fled New York for San Francisco following the 1957 baseball season. Ebbets Field closed on September 24, 1957, was demolished on February 23, 1960 and is currently the site of apartment buildings. The Dodgers played at Ebbets Field for 45 years and have now called Los Angeles home for 54 seasons.