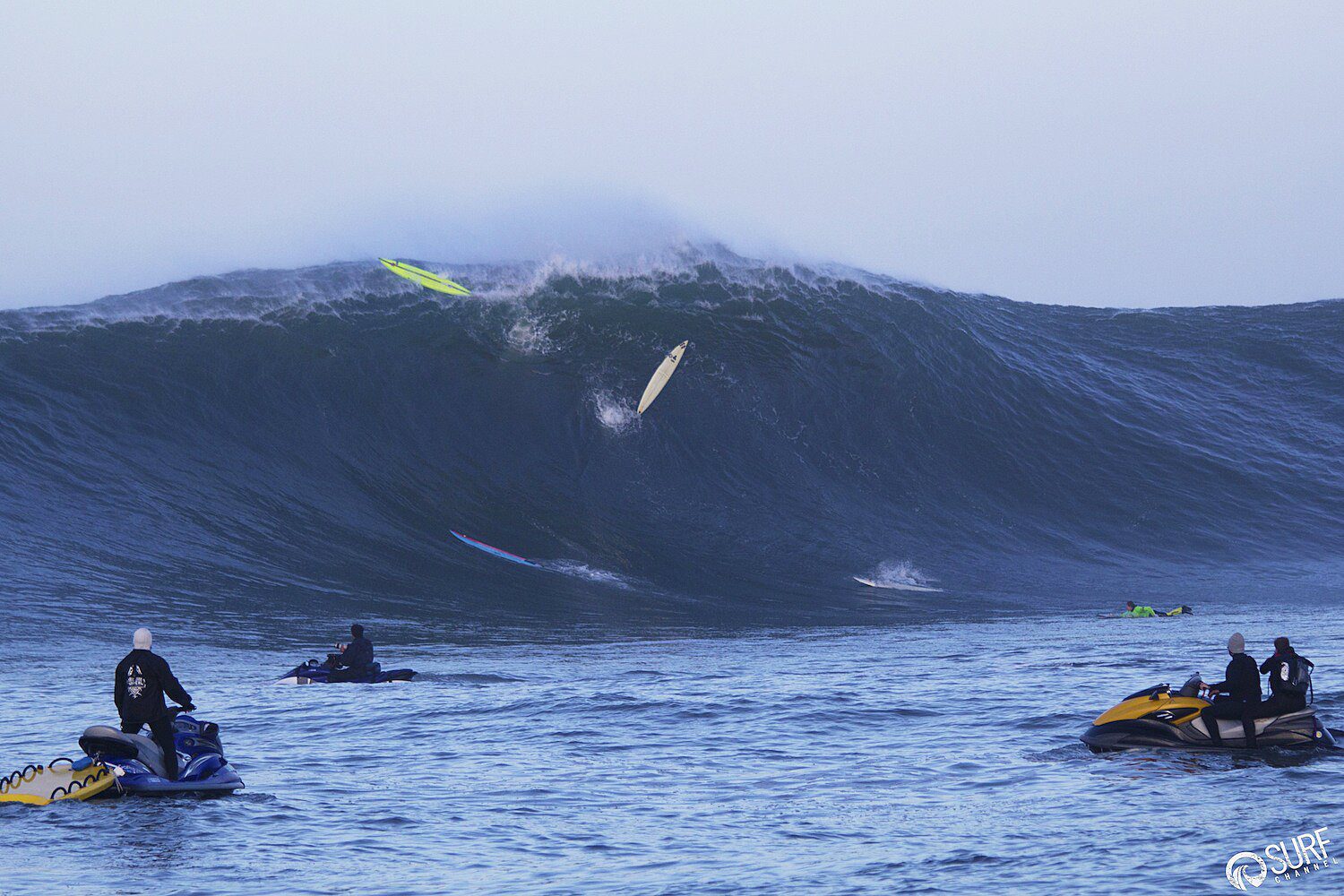 A maverick is non-comformist, free-spirited, original and eccentric. Located 20 miles south of San Francisco and one-half mile offshore from Pillar Point Harbor, Mavericks is a winter destination for the world’s best big wave surfers.  Following winter storms in the northern Pacific Ocean, waves at Mavericks can routinely crest at over 25 feet and top out at over 60.  They are so huge that they can be recorded on the Richter scale—a logarithmic program designed to measure the magnitude of earthquakes.

The surf break at Mavericks is caused by an unusually shaped underwater rock formation.  According to the U.S. National Oceanic and Atmospheric Administration, a long, sloping ramp leads from the sea floor to the surface, resulting in a U-shaped or V-shaped wavefront.  This then comes over the ramp and collapses into a small area at the top center of the ramp with tremendous force. In March 1967, local residents Jim Thompson, Dick Knottmeyer and Alex Matienzo surfed the distant waves off Pillar Point Harbor with “Maverick,” a white-haired German Shepard belonging to Matienzo’s roommate.  The men left Maverick—who was accustomed to swimming with them while they surfed—on the shore, but he swam out to them.  Finding conditions unsafe for the dog, Matienzo tied him to the bumper of his car before rejoining the others.

Deeming the bigger outside waves too dangerous, the surfers named the location after Maverick.  Jeff Clark grew up in Half Moon Bay, just south of Pillar Point Harbor.  In 1975, at age 17, he became the first documented person to tackle the 20-plus foot waves head on.  Clark surfed Mavericks alone for the next 15 years before he could get others to surf it with him.

Several would paddle out, but none would take on the massive waves. In January 1990, Santa Cruz residents Dave Schmidt and Tom Powers joined him to become the next two people to surf Mavericks.  Later that year, a photo of Mavericks appeared in Surfer magazine, triggering interest.

Surfing magazines continued to publish photos of Mavericks and, in 1992, filmmaker Gary Medeiros released a movie about Mavericks entitled Waves of Adventure in the Red Sea.  Word got out that California had a big wave that rivaled Hawaii’s Waimea Bay, on the north shore of Oahu. Only a few are willing to risk the hazardous, sometimes deadly, conditions at Mavericks.  The death of Hawaiian big wave surfer Mark Woo in December 1994 led to the creation of the Mavericks Water Patrol, a team of open water rescue experts riding jet skis.  Sion Milosky was named Hawaii’s North Shore Underground Surfer of the Year in February 2011.

One month later, he used some of his $ 25,000 prize money to travel to Half Moon Bay to catch one of the last big swells of the season at Mavericks.  At around 6:30 pm on March 16, Milosky drowned after being held underwater by two successive giant waves.  Chasing Mavericks is a 2012 biopic about Mavericks surfer Jay Moriarty, whose spectacular wipeout in 1994 had landed the 16-year-old in the pages of the New York Times and on the cover of Surfer magazine.

Actor Gerard Butler played Moriarty in the film.  In December 2011, Butler survived a near-death accident after being held underwater by several 15-foot waves and dragged through rocks.  After rescuers pulled him from the water, Butler was treated at Stanford Medical Center and survived. The Titans of Mavericks, known as the “Greatest Show on Earth,” in surfing circles, is an invitation-only surfing contest held in winter, when the biggest waves come.  It is one of the most hazardous sporting events in the world, with 24 surfers competing for the $ 120,000 purse.  Competing in the Titans of Mavericks—where Mount Everest meets Niagara Falls—is worn like a badge of honor.  Atmospheric and ocean conditions dictate when—or if—the event will be held.

Two dozen contestants, all men, are given 48 hours’ notice to get to Half Moon Bay from all around the world.  First held in 1999, the most coveted event in big wave surfing awards several prizes, including the $ 10,000 “Boldest Drop” award for the most spectacular ride of the day and $ 5,000 for the day’s best ride in the “barrel.” Titans of Mavericks is not held every year.  In 2015, the call was never made because the waves were not big enough.  After a rogue wave injured 13 people in 2010, spectators are no longer allowed on the beach or bluff.  “We’re really discouraging people [to come to the shore] because we don’t want to talk to families about what happened to their loved ones,” said Deputy Harbormaster Cary Smith.

The inaugural event was won by Daryl “Flea” Virotko, who won again in 2000 and 2004 to become the Titans’ only three-time winner.  AT&T Park, home of baseball’s San Francisco Giants, hosts a live broadcast of the event on its giant video display.  The tenth Titans of Maverick championship, held in February 2016, was won by Nic Lamb of Santa Cruz.

“I’ve seen a lot of people paddle out there, but only a few really ride it.  I don’t care if word gets out.  Mavericks will always take care of itself.”
– Jeff Clark