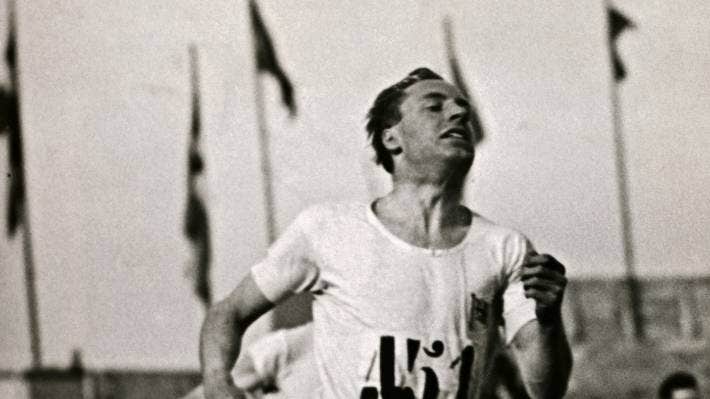 Eric Liddell is more famous for the race he did not run than the one he did.

Made famous by the 1981 film, Chariots of Fire, Liddell was a Scottish Olympic sprinter.  Dubbed the Flying Scotsman after the record-breaking locomotive, he refused to run on the Sabbath.  Like Sandy Koufax, who declined to pitch Game 1 of the 1965 World Series against the Minnesota Twins because it fell on Yom Kipper, Liddell stood up for what he believed even when his own well-being – and popularity – were bound to suffer.

Born January 16, 1902, in Tientsin [now Tianjin], Eric Henry Liddell was the second of four children born to Scottish parents who were serving as missionaries in northeastern China.  At six, he returned to England and attended Eltham College, a boarding school outside London founded as the School for Sons of Missionaries.  Liddell was remembered by his headmaster at Eltham as a boy “entirely without vanity.”  In 1920, Liddell entered the University of Edinburgh to study science.

A fine rugby player who could have played on Scotland’s 1925 Grand Slam winning team, he abandoned the sport to focus on track.  Liddell became the fastest man in Scotland.  In 1923, he ran the 100-yard dash in 9.7 seconds, which stood as a British record for 35 years.  From 1921 to 1923, Liddell won the 110 and 220-yard sprints at the annual Triangular International contests, a competition that showcased the best athletes from Scotland, England and Ireland.

Liddell earned a spot on the Scottish Olympic team for the 1924 Summer Games in Paris.  A talented sprinter, he was better in the shorter dashes than the longer ones.  In Paris, the qualifying heats for the 100 meters were scheduled for Sunday.  A devout Christian, Liddell chose not to run on the Sabbath.  He withdrew from the 100 meters – his best event and one in which he was heavily favored – and spent the day preaching at The Scots Kirk in Paris, the only English-speaking Presbyterian church in France.

The Flying Scot also declined to run in the 4 x 100 and 4 x 400 relay events, which were also scheduled for Sunday.  Instead, he entered the 400 meters, an event scheduled for mid-week in which he was a decided underdog.  Liddell won by six meters, claiming the gold medal in a world-record time of 47.6.  A few days later, Liddell took bronze in the 200 meters.

Following the Paris Olympics, Liddell returned to Edinburgh to finish his degree.  A year after his record-setting performance in the Olympics, he competed in the Scottish Amateur Athletics Association meet in Glasgow.  In his last races in the U.K. before becoming a missionary, Liddell – displaying his unique running style, with head tossed back and mouth wide open — won the 100, 200 and 400 meter events.

1925 marked the beginning of Eric Liddell’s second career, the one he cared about far more than the first.  Like Pat Tillman, who eschewed the riches of the NFL to become an Army Ranger in Afghanistan following the terrorist attacks of September 11, Liddell chose to serve.  He returned to Tientsin, where he was ordained a minister nine years later.  In 1934, he married Florence McKenzie – the daughter of Canadian missionaries.  They had three daughters.

When Japan invaded China in 1937, Liddell was sent to Siaochang, where he crossed the Japanese army lines.  By 1941, the situation in China had grown so dangerous that the British government advised all British nationals living there to leave.  Liddell remained in China while Florence and the children moved to Canada.  In March 1943, he was detained and sent to a Japanese POW camp 600 miles away in Weihsien, where he would remain until the end of the war.  Liddell was given an opportunity to leave the camp in a prisoner exchange between Japan and Britain, but instead gave his place to a pregnant woman.

By the end of 1944, Liddell had fallen ill and was experiencing terrible headaches.  With no medical treatment available, he could only wait.  In early 1945, he suffered a minor stroke and, on February 21, while talking to a friend, he suddenly collapsed and slipped into a coma.  He died that evening.

Eric Liddell died of on an inoperable brain tumor in a Japanese POW camp five months before the liberation.  He was 43.  Mr. Liddell, who in 2002 was voted Scotland’s most popular sports figure in history, returned to Scotland a couple of times, in 1931 and again in 1939.  The two-time Olympic medalist, who had won the hearts and minds of thousands of Chinese as a missionary, was asked if he had any regrets.  “It’s natural for a chap to think over all that sometimes,” Liddell said, “but I’m glad I’m at the work I’m engaged in now.  A fellow’s life counts far more at this than the other.”

“Those who honor me, I will honor.” –  The Book of Samuel

Phil Jackson | The Most Successful Coach in the NBA
Gump Worsley