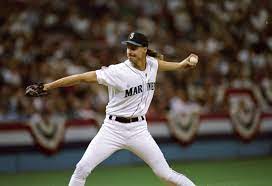 No pitcher in baseball history was more physically imposing than Randy Johnson.

Randall David Johnson played for six teams over 22 major league seasons and holds five of the seven highest single-season strikeout totals by a lefthander in the modern era.  Johnson won the Cy Young Award [Daily Dose, 7/6/16] five times, second only to Roger Clemens’ seven and, with Greg Maddux, is one of two pitchers to win the award in four consecutive seasons [1999-2002].  He struck out 4,875 batters—the most of any lefthander in history.  Only Nolan Ryan has more.  Johnson led the league in strikeouts nine times, had the lowest ERA in four separate seasons, and was a ten-time All-Star.  At 6’-10”, 225 pounds, Johnson featured a 100 mile-an-hour fastball and a hard, biting slider—dubbed “Mr. Snappy”–that reached 90 on the radar gun.  Both were delivered from a three-quarters arm angle that struck fear into major league hitters for two decades.

Johnson had control problems early in his career.  He led the American League in walks for three straight years from 1990 to 1992 and hit batsman in 1992 and 1993.  He had only 64 wins by his 30th birthday and finished with 303 career victories—more than half of them coming after 1999, when he was 36.  Only seven lefties in history have started more big league games than “RJ” and he is ninth on the list of most innings pitched by a southpaw.  The oldest pitcher to throw a perfect game, he went 103-49 with a 2.65 ERA after turning 35.  Johnson is the fifth-winningest lefthander in history and recorded a win against all 30 MLB franchises.  He is one of three players [Pedro Martinez, Gaylord Perry] to win a Cy Young Award in both leagues.

Born in Walnut Creek, California, September 10, 1963, Randy is one of Hannah and Bud Johnson’s six children. Bud, a policeman and security guard, taught his son to throw a baseball and Johnson, pretending he was Vida Blue [Daily Dose, 7/28/16] practiced by pitching a tennis ball at a strike zone he outlined on the garage door.  At Livermore High School-located on the eastern edge of the San Francisco Bay Area—Johnson was a standout in basketball, twice leading the East Bay Athletic League in scoring.  He also played baseball, striking out 121 batters in 66 innings and throwing a perfect game in his final start of the 1982 season.  After being picked by the Atlanta Braves in the fourth round of the 1982 amateur draft, the lanky lefthander turned down a $ 50,000 signing bonus and accepted a scholarship offer to USC, where he also played basketball for two years.  Despite teaming with 1987 AL Rookie of the Year Mark McGuire and current Oakland Raiders coach Jack Del Rio, the Trojans failed to win the conference baseball championship during RJ’s time in Los Angeles.

In 1985, the Montreal Expos [now Washington Nationals] selected Johnson in the second round of the amateur draft.  He played the 1986 season in the Single-A Florida League and, by 1988, had worked his way up to Triple-A Indianapolis.  On September 15, 1989–five days after his 25th birthday– Johnson made his big league debut, striking out five Pittsburgh Pirates in five innings of work to earn his first major league victory.  The following season, he was 0-4 with a 6.67 ERA after his first seven outings and was traded to the Seattle Mariners.

Nicknamed “Big Unit” by former Expo teammate Tim Raines while in Montreal, Johnson featured an overpowering fastball that he couldn’t control.  In August 1992, he sought out Nolan Ryan, the great Texas Rangers right-hander who was nearing the end of his hall-of-fame career. “I told Randy he could be the most intimidating pitcher in baseball,” said Ryan.  “He was a lot like me when I was younger.  He was just pitching and not doing a lot of thinking.”  Ryan suggested he make a few adjustments to his delivery and, in a game against Texas one month later, Johnson threw 160 pitches and struck out 18 Rangers.  In 1995, Johnson won his first Cy Young Award after posting a .900 winning percentage, second-best in AL history.  He missed much of the 1996 season following back surgery, but returned in 1997, going 20-4 with 291 strikeouts.  Johnson was traded to Houston midway through the 1998 season and led the Astros to the playoffs, going 10-1 with a 1.28 ERA in 11 starts.

Randy Johnson signed with the Arizona Diamondbacks in 1999 and became the best pitcher in baseball.  He won four straight Cy Young Awards and led the Snakes to the first three Western Division titles in team history.  In the 2001 World Series, Johnson won both of his starts, tossing a complete game shutout over the New York Yankees in Game 2 and allowed two runs in seven innings of work in a 15-2 rout in Game 6.  Twenty-four hours later, RJ came on relief in the top of the eighth, recorded the final four outs of the game, and earned his third win of the Series when the Diamondbacks won a dramatic Game 7 with a walk-off single.  After going 3-0 with a 1.04 ERA, Mr. Johnson was named [along with Curt Schilling] co-MVP of the only Fall Classic in which he ever appeared.

Arizona traded Johnson to the Yankees in 2005, but he returned to the Diamondbacks for the 2007 and 2008 campaigns.  RJ played his final season with the San Francisco Giants, where he became the 24th pitcher in history to reach 300 wins.  He retired following the 2009 season.

The Big Unit was intimidating.  Standing 6’10” and wearing a permanent scowl, hitters never knew what to expect from Johnson.  At the 1993 All-Star Game, Phillies first baseman John Kruk—who batted lefty—came to the plate in the third inning.  After whistling a first-pitch fastball over Kruk’s head, the Phillies’ slugger wanted no part of Johnson, waving feebly at three pitches before happily retreating to the safety of the dugout.  At the Midsummer Classic four years later,  Rockies outfielder Larry Walker stood in against Johnson.  After Johnson’s first offering sailed over his head, the left handed-hitting Walker turned his helmet backwards and moved into the right-handed batter’s box, where he drew a walk.  RJ threw hard.  At a spring training game in March 2001, he threw a fastball that exploded a very unlucky bird, which died instantly, leaving nothing but feathers scattered between the mound and home plate.

The most dominant lefty since Sandy Koufax, Johnson holds the single-game strikeout record for southpaws in the both the NL [20] and AL [19].  Johnson had six seasons in which he struck out at least 300 batters, tying him with Ryan for most in history [Koufax did it twice].  The Big Unit was 303-166 in his career and holds the highest single-season [13.41] and career [11.61] strikeouts-per-nine-innings record.  He threw a no-hitter in 1990 and a perfect game 14 years later.  In 2002, Johnson led the NL in wins, ERA and strikeouts—the “triple crown” of pitching.  An immaculate inning is when  a pitcher strikes out three batters on nine total pitches.  Johnson did it twice, second-most [behind Koufax, with three] of all-time.

On this date in 2015, Randy Johnson was voted into the Baseball Hall of Fame on the first ballot, receiving 97.3 percent of the votes.  Only eight players in baseball history—and two pitchers—received more hall of fame votes than Johnson.