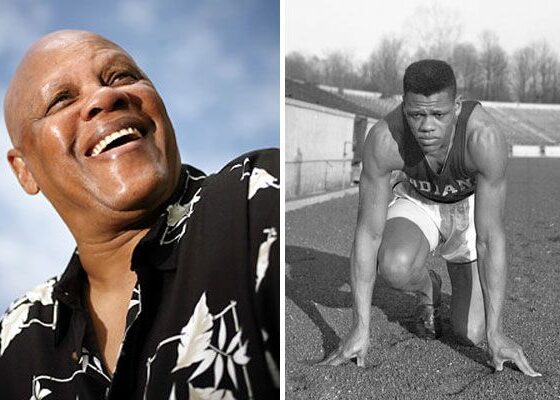 Milton Gray Campbell is the greatest athlete that you have never heard of.

Born in Plainfield, New Jersey, on December 9, 1933, Milt was the second of three children born to Thomas and Edith Campbell. Milt attended Plainfield High School and made an immediate impact in every sport he participated in. He was the only African-American on the swim team and dismissed racial comments from teammates and opponents in route to being named All-American. In track, Campbell dominated as a sprinter, long jumper and hurdler, setting New Jersey state records. He was unstoppable as a running back on the Cardinals football team. Campbell was a rising high school senior when he won the silver medal in the decathlon at the 1952 Olympics in Helsinki, finishing second to Bob Mathias [Daily Dose, November 17]. The Americans swept the decathlon that year and Campbell returned to Plainfield following the Games. In his senior year, Campbell scored 23 touchdowns and 180 points for the football team in the fall, earned All-American honors in swimming in winter and won titles in high hurdles and high jump at a national track meet in the spring. In between, he substituted for a heavyweight wrestler–who was ill and could not compete–in a dual meet against Plainfield’s archrival. Campbell pinned his opponent—who went on to win the state heavyweight title—in 1:28 to win the match and the meet.

In 1953, Sport magazine named Milt Campbell the best high school athlete in the world. Colleges all over the country recruited him but several Plainfield-area athletes, including Jim Roberson, Archie Harris and “Doc” Anderson, convinced the superstar to join them at Indiana University. Campbell arrived in Bloomington in the fall of 1953, competing in football and track. He averaged 5.1 yards per carry in his sophomore year but left IU in 1955 to join the U.S. Navy, was stationed in San Diego and continued training. The 1956 U.S. Olympic Trials were held at the Los Angeles Coliseum and, on June 30, Milt Campbell attempted to qualify in the 110 meter high hurdles. He finished fourth—only three make the team—and decided to enter the decathlon trials, scheduled for July 13-14 in Crawfordsville, Indiana. Campbell, competing in his first-ever decathlon, finished second to Rafer Johnson, the heavy gold medal favorite, and made the team. Four months later, Campbell would beat Johnson by a whopping 350 points to take the gold medal in the Summer Games in Melbourne, Australia, becoming the first African-American to win gold in the decathlon while establishing a new Olympic record of 7,937 points.

The Cleveland Browns drafted Campbell in the 5th round of the 1957 NFL Draft, where he played behind Jim Brown [Daily Dose, October 20], whom Cleveland had taken with their first pick. Following the season, he married a white woman and Cleveland head coach Paul Brown cut him immediately upon hearing the news. The 6’3”, 223 pound Campbell headed for the Canadian Football League [Daily Dose, November 25], playing for Hamilton, Toronto and Montreal before his career came to a close in 1964. He studied judo under world-renowned instructor Yoshishada Yoneska and stood a good chance of making the 1972 U.S. Judo Olympic team before the Judo Federation took his AAU card, declaring him ineligible because he had competed as a professional football player.

Milt Campbell had one of the most remarkable careers in the history of athletics. He is the only person in both the International Swimming Hall of Fame [inducted 2012] and Track & Field [inducted 1989] Hall of Fame. In 1999, he was named New Jersey Athlete of the Century. Mr. Campbell maintained a 194 bowling average, was an accomplished tennis player and was named to the 1950’s all-decade football team by the New Jersey Star Ledger. Campbell was NCAA champion in the 120 meter high hurdles in 1955 and is a member of Indiana University’s Athletics Hall of Fame. In 1957, he set world records in the indoor 60 meter hurdles and 120 meter outdoor high hurdles before joining the Cleveland Browns. Emmy Award-winning Olympic filmmaker Bud Greenspan said, “Milt Campbell was, to me, the greatest athlete who ever lived.” Mr. Campbell was inducted into the U.S. Olympic Hall of Fame in 1992.