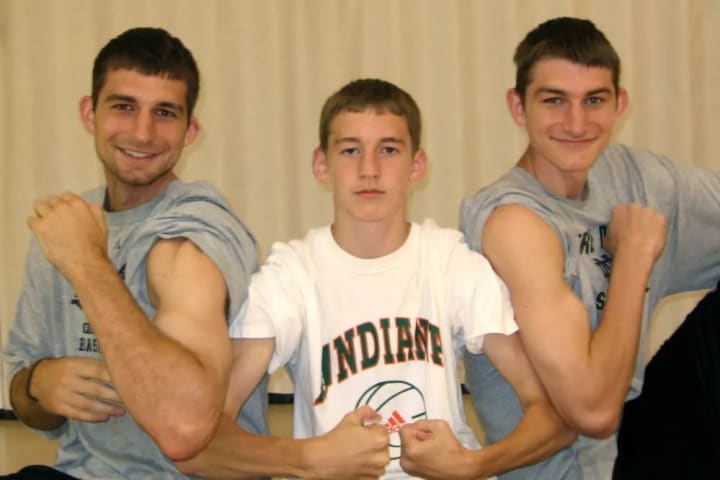 The Zeller brothers are one of the most successful set of siblings the game of basketball has ever seen.

Hoosier Hysteria is the state of excitement surrounding basketball in Indiana.  In 1925, basketball’s inventor, Dr. James Naismith, visited an Indiana basketball state finals game.  He later wrote, that while it was invented in Massachusetts, “basketball really had its origin in Indiana, which remains the center of the sport.”  Indiana is to basketball what Texas is to football and Minnesota is to hockey.  The heart of Hoosier Hysteria is at the high school level, where passion for the sport is unparalleled.  Indiana has produced over 175 NBA players, making it the most successful state in the nation per capita at producing top talent.  More than a sport, it is a religion, practiced in towns like Anderson, Muncie, Richmond and New Castle.  Indiana gave us Oscar Robertson, Rick Mount and Larry Bird.  The Hoosier State also gave us a remarkable trio of basketball-playing siblings – the Zeller brothers.

Luke, Tyler and Cody Zeller all played basketball at Washington High School, a 730-student, public co-educational school located in Washington, Indiana.  All were honor students who graduated near the top of their class.  Each was a McDonald’s High School All-American.  All were named “Mr. Basketball” as the best player in Indiana, and each Zeller brother led Washington to at least one state title.  Just five years apart, the boys started playing basketball in second grade.  By the time they reached high school, they were among the best players in the nation.

Luke is the eldest of the Zeller brothers.  Upon entering Washington High, he requested number 40, the same jersey number his grandfather had worn as a high school sensation in Cedar Rapids, Iowa.  After Luke graduated, Washington intended to retire number 40, but Tyler asked to wear it.  When Tyler left, the jersey was handed to Cody.  Following Cody’s graduation in 2010, number 40 was permanently retired by the Hatchets.

Lucas Joseph Zeller was born in Ames, Iowa, April 4, 1987.  He played four years at Washington under coach Dave Omer, where he averaged nearly a double-double as a junior.  Luke became the first Washington player to score 1,000 points in a career and finished as the school’s all-time points leader, with 1,727.  His 820 career rebounds are second-most in school history.  A three-time captain and two-time team MVP, Luke is the only player in Washington history to be selected all-conference four times.  The best pure shooter of the Zeller brothers, Luke led Washington to a 27-2 record as a senior.  In the 3A state title game in 2005, he handed out a finals-record 11 assists, then hit the game-winning shot from midcourt as time expired in overtime to lead the Hatchets to a 74-72 win over Plymouth.  Following the state tournament, Luke was honored with the Trestor Award, given annually to the outstanding senior participant who excels in mental attitude, scholarship, leadership and athletic ability.

Washington’s 2005 co-valedictorian and a National Honor Roll recipient, Luke shunned Indiana University, which was in the midst of the Kelvin Sampson recruiting violations fiasco, and accepted a scholarship to Notre Dame.  The 6’11” center was elected to the Big East All-Academic Team and was co-captain as a senior.  Undrafted by the NBA, Luke played in Japan, Lithuania and the NBA Developmental League between 2009 and 2014.  During the 2012-13 NBA season, he played 16 games for the Phoenix Suns.  Luke is the founder of DistinXion, a non-profit organization that puts on character-building basketball and cheerleading instruction camps for youngsters.

The Zellers are an athletic family.  Maternal grandfather, Marvin Eberhard, led his high school team to the 1942 Iowa state championship.  Mother Lorri [Marvin’s daughter] played three sports in high school  and lettered in softball and basketball at Coe College, where the six-footer is a member of the Coe Hall of Fame.  Uncle Al Eberhard [Marvin’s son and Lorri’s brother] was a first-round draft pick of the Detroit Pistons in 1974 and is a University of Missouri hall-of-famer.  Father Steve played three sports in high school and was a football walk-on at Iowa State.

Washington is a typical Indiana small town.  Tucked in the southwest corner of hoops heartland, a little over 100 miles outside Indianapolis, the town has about 12,000 residents.  Washington’s gym – the Hatchet House – seats 7,090 [more than half the town’s population], but packs in many more on game nights.  The Hatchets won three state titles between 1930 and 1942 and have produced several fine players.  In 1930,“Big Dave” DeJernett was the first African-American to lead an integrated basketball team to a state championship.  Leo Klier set a single-season scoring record as an All-American at Notre Dame in 1944 and is a member of the Fighting Irish’s All-Century Team.  Craig Neal was a third-round pick of the Portland Trail Blazers and Steve Bouchie was 1979 Mr. Basketball before playing for Bob Knight at IU.

Born in Visalia, California, January 17, 1990, Tyler Paul Zeller grew up in Washington.  In addition to basketball, he played varsity tennis.  A gifted student, Tyler graduated third in his class at Washington High, amassing a 3.99 GPA.  As a freshman, he teamed with Luke to help the Hatchets to the 2005 state title.  Three years later, the seven-foot center averaged 33 points and 11 rebounds per game while shooting 69 percent from the field.  Tyler led Washington to the 2008 3A title game, where he scored 47 points in a win over [Fort Wayne] Harding to break a record that had stood since 1970.  A first-team Parade All-American, Tyler signed with North Carolina to play for coach Roy Williams.

In his first year at UNC, Tyler was part of the Tar Heels team that won the 2009 NCAA championship.  As a senior, he was named 2012 ACC Player of the Year.  An Academic All-American, Tyler Zeller had his jersey retired by UNC.  It now hangs in the rafters of the Dean Smith Center in Chapel Hill.  The Dallas Mavericks selected Tyler with the 17th overall pick of the 2012 NBA Draft.  The fourth Tar Heel to be drafted in the first round in 2012, he was traded to the Cleveland Cavaliers on draft night.  After two seasons in Cleveland, Tyler was traded to the Boston Celtics, where he played three seasons before being waived in July 2017.

Born October 5, 1992, Cody Allen Zeller is the family prankster.  He was part of three teams that won Indiana high school titles.  As a freshman, he saw limited playing time on a squad dominated by Tyler.  In his junior season, the “Big Handsome” scored 20 points and hauled in 26 rebounds to lead the Hatchets to the 3A crown over [Gary] Wallace.  The Hatchets repeated as state champions in 2011, with Cody guiding Washington to a 24-4 mark and win over Culver Academy in the title game.  Like Luke, he was named recipient of the Trestor Award following the tournament.

Unlike his two older brothers, Cody Zeller declined scholarship offers from Notre Dame and UNC, deciding instead to stay home and enroll at Indiana University.  Labeled the “savior of IU basketball,” he signed in November 2010.  Hoosiers coach Tom Crean said, “He’s the most mentally focused kid I’ve ever recruited.  I see a young man that has mental toughness that is not normal.”  In his first year in Bloomington, Cody led the Hoosiers in scoring and rebounding.  After leading the conference in field goal percentage, he was named Big Ten Freshman of the Year.  The following year, Cody was named Academic All-American and guided the Hoosiers to the 21st Big Ten title in school history before declaring for the NBA Draft, where he was selected fourth overall by the Charlotte Hornets.

Cody Zeller is entering his fifth season with the Charlotte Hornets in 2017-18.  In May 2017, he returned to Bloomington receive his diploma from IU’s prestigious Kelley School of Business.