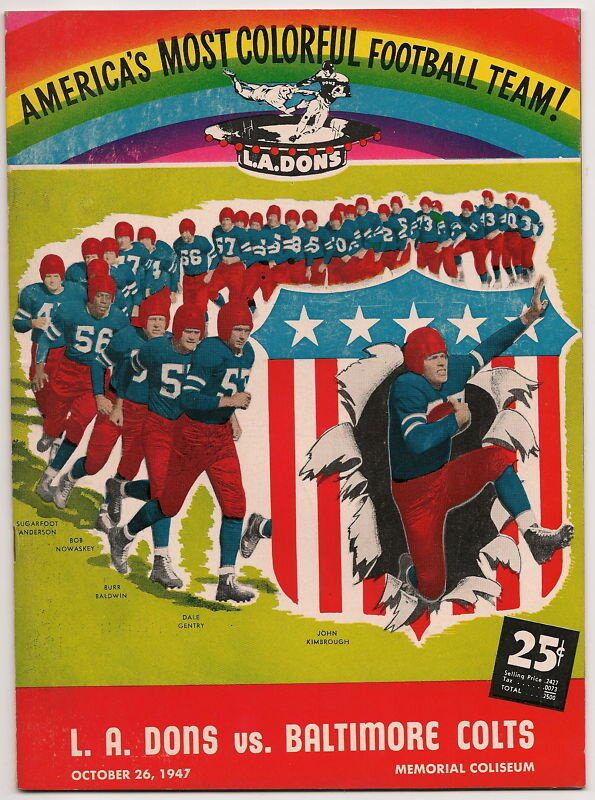 Six decades ago, the All-American Football Conference became one of the National Football League’s most formidable challengers. In the early 1940s, Chicago Tribune sports editor Arch Ward unsuccessfully encouraged the NFL to expand.  When NFL owners balked, Ward brought together a group of wealthy businessmen, some of whom had attempted to purchase NFL teams, to discuss forming a rival league.  Ward, who had masterminded baseball’s All-Star Game and football’s College All-Star Game [Daily Dose, 7/27/16], hoped to bring about a second league that would play the NFL in an annual championship game similar to the World Series.  On June 4, 1944—two days before the Allied invasion of Normandy during World War II—the AAFC was founded. Professional football was considered a second-rate sport in the 1940s.  Horse racing, boxing, baseball and college football were far more popular.  The NFL title game typically drew 35,000 fans, while 90,000 attended the Rose Bowl and the World Series was a national institution.  Longtime NFL President Joe Carr had said, “No owner has made money from pro football, but a lot have gone broke thinking they could.”  Originally intending to begin play in 1945, the AAFC postponed its opening for a year as World War II wound down.  Postwar peace produced a surplus of talent and the AAFC attracted many of the nation’s best players.  Rosters in the inaugural 1946 season included 40 of the 66 college all-stars, two Heisman Trophy winners and more than 100 players with NFL experience.  Ward, who had worked in public relations under Coach Knute Rockne at the University of Notre Dame, tapped Jim Crowley, one of the “Four Horseman of Notre Dame” as commissioner of the upstart league.  Not coincidentally, the NFL commissioner was Elmer Layden, another member of Rockne’s legendary 1924 backfield.  The AAFC kicked off its first campaign with two divisions of four teams each.  Original franchises included the New York Yankees, Brooklyn Dodgers, Buffalo Bisons and Miami Seahawks in the Eastern Division, while the Western Division consisted of the Cleveland Browns, Chicago Rockets, Los Angeles Dons and San Francisco 49ers. In most interleague sports wars, the established league has major advantages in prestige, finance and public awareness.  The AAFC posed a real threat, as league owners—who made their fortunes in private industry—were wealthier than their NFL counterparts.  Their primary assets were their teams, which were not worth much in the pre-television era.  Ward ensured ample attention in the press, and air travel was now viable.  Like Major League Baseball, all NFL teams played in the Northeast and Midwest, but the AAFC seized the opportunity to place teams in open markets in California and Florida.  The NFL did not welcome its new rival.  Layden advised the new league to, “First get a ball, then make a schedule, and then play a game.”  Washington Redskins owner George Preston Marshall quipped, “The worst team in our league could beat the best team in theirs.”  Yet the NFL was vulnerable.  Dan Topping, owner of the NFL’s Brooklyn Tigers, wanted to move his team from Ebbets Field [Daily Dose, 10/30/15] to the much larger Yankee Stadium.  When he was denied, Topping moved his team to the AAFC.  The Cleveland Rams—winners of the 1945 NFL title—moved to Los Angeles, prompting unrest by becoming the first defending champion to relocate. The Cleveland Browns responded by hiring Paul Brown–winner of six state championships in nine years at Ohio’s Massillon High School and the 1942 national title at Ohio State–as head coach while becoming the city’s lone franchise.  Brown was one of football’s greatest innovators, as he was the first to use game film to scout opponents, form a scout team to practice against the starters, and hire a full time staff of assistant coaches.  Brown invented the play book, modern face mask, and the draw play—all staples of the game today.  A year before Jackie Robinson [Daily Dose, 4/15/16] played his first major league game, Paul Brown broke pro football’s color barrier by starting two black players.  Under the man for whom the team was named, Cleveland dominated its opponents, going 47-4-3, including 29 straight games without a loss [still a pro football record] and capturing four straight AAFC championships.  This lack of parity lead, in part, to the upstart league’s eventual demise, as fans did not turn out to see lopsided games. The AAFC chose stadiums larger than the NFL’s in Chicago, New York and Cleveland.  The league began with eight teams playing 14 games, while the NFL scheduled ten teams playing eleven games each.  Bidding wars for players between the rival leagues drove rising salaries.  Despite doing well at the gate, the only teams to make a profit in 1946 were the AAFC Browns and NFL Bears, both champions of their respective leagues.  The Seahawks were the AAFC’s biggest fiasco; Miami saw two games postponed by hurricanes, drew poor crowds, finished last at 3-11, and lost $ 350,000.  They shut down after the first season and were replaced by the Baltimore Colts.  In 1947, more than 82,000 fans watched the Yankees and Dons play at the Los Angeles Coliseum and over 70,000 turned out to the see the Browns play New York at Yankee Stadium.  Meanwhile, the Chicago Rockets, competing in a town with two NFL teams, played before empty seats at Soldier Field and were sold for the second time after the 1947 season.  By 1949, nearly every team in both leagues was losing money.  Salaries were rising and attendance was dropping.  Prior to the 1949 season, the Dodgers merged with the Yankees and the AAFC realigned into one division, reducing its schedule to 12 games.  Peace talks commenced with the AAFC wanting four teams admitted to the NFL.  The senior league was only willing to admit the Browns and 49ers.  The two sides compromised, and the Browns, Colts and 49ers joined the NFL.  The rest of the AAFC folded following the 1949 season. The AAFC challenged the NFL for four seasons but was unable to sustain itself financially.  The new league introduced many lasting innovations to the game, including a 14-game schedule, the zone defense, and racial integration. The quality of play was superb, as 15 AAFC alumni were inducted into pro football’s hall of fame.  Following the merger, the Browns played in every NFL title game from 1950 to 1955, winning three while dominating the NFL.  The AAFC put the first pro football teams in Los Angeles, Miami and San Francisco.  The AAFC was a coast-to-coast league more than a decade before Major League Baseball.  The upstarts pioneered air travel when the NFL still traveled by train.  The AAFC introduced the double round robin schedule, with each team playing a home and away game against each league foe.  Ten years after the AAFC folded, the American Football League [Daily Dose, 8/2/16] was born.

On this date in 1946, the All-American Football Conference opened play, as the Cleveland Browns hosted the Miami Seahawks before more than 60,000 patrons at Cleveland’s Municipal Stadium.  The Browns won, 44-0.