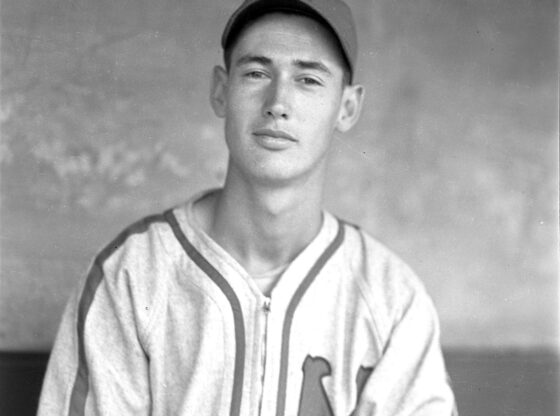 Williams could hush a room just by entering.  A man’s man, Williams had a singular focus: hitting a baseball.  He would practice his swing for hours, honing it in front of a bathroom mirror in the morning, in the locker room hours before the game, or while standing in left field awaiting his next trip to the plate.  He was a force that commanded attention.  Quite possibly the greatest hitter that ever stepped into the batter’s box, the long-time Red Sox left fielder won six batting titles in 16 complete big league seasons.  Williams is the last man to bat over .400.  He hit .300 or better 16 times, including 1960 when, in his final season, the 42-year-old lefty hit .316 with 29 home runs. “The Kid” wrote the book on hitting, both figuratively and literally.  With a .344 lifetime average, Williams was an authority on the subject.  He was an obsessive student of hitting.  Hillerich & Bradsby, manufacturers of the famous “Louisville Slugger” baseball bat, presented Williams with four bats weighing 34 ounces and one weighing 33 ½ ounces, challenging him to identify the lighter one.  Williams swung each, then correctly chose which bat was lightest.  His book, The Science of Hitting [published in 1971] became the seminal handbook to what he considered “the single toughest thing to do in sport.” Born in San Diego on this date in 1918, Theodore Samuel Williams was the elder of two boys whose parents were rarely home.  At Herbert Hoover High School, Williams’ only passion was baseball – particularly hitting.  At 17, he signed with the San Diego Padres of the Pacific Coast League for $ 150 a month.  Two years later, the Boston Red Sox signed Williams and optioned him to their minor league club in Minneapolis, where the slender 19-year-old won the league’s Triple Crown after batting .366 with 43 home runs and 142 RBI.  In 1938, he broke in with the Red Sox.  Dubbed “The Kid” by the BoSox veterans, Williams batted .327 and led the American League in RBI, the first time a rookie had ever won that crown.  Although he finished fourth in MVP voting in his rookie year, he failed to make the All-Star team for the only time in his career. Williams hit 521 career homers, some of which were the most famous in baseball history.  As a boyish and lanky 22-year-old, The Kid belted a fastball into the upper right field stands at Briggs Stadium in Detroit for a three-run walk-off home run to win the 1941 All-Star Game.  Williams later said the homer “remains to this day the most thrilling hit of my life.”  In June 1946, Williams launched one deep into the right field stands at Fenway Park.  The ball traveled 502 feet, landing in Section 43, Row 37, Seat 21.  It is the longest blast ever hit in Fenway Park, and is commemorated with “The Lone Red Seat,” which stands out among its green counterparts in the right field stands.  On the last day of the 1960 season, Williams came to the plate in the eighth inning.  In the final at-bat of his career, he pulled a 1-1 pitch from the Baltimore Orioles Jack Fisher into the Boston bullpen in front of a nearly empty house.  The moment was captured beautifully by John Updike in The Kid Bids Adieu, a short story published in The New Yorker in October 1960. At the time of his retirement, only two players – Babe Ruth and Jimmie Foxx – had more career home runs than The Kid. If the name of the game is getting on base, no player in history was better than Williams.  He reached base safely 48.2 percent of his at-bats – almost half the time.  Ruth is second, at .474.  With a keen eye, Williams led the league in OBP seven straight years and a dozen times overall.  “If Mr. Williams did not swing at it,” said one American League umpire, “It wasn’t a strike.”  The “Splendid Splinter” walked more than once every five trips to the plate.  He led the AL in homers four times, RBI four times and posted a career slugging percentage of .634 – second only to Ruth. Williams played his entire career in Boston, where he had a long-running feud with the hostile local press.  With seven dailies, Boston newspapermen were more than eager to disparage the ornery slugger.  As Joe DiMaggio played to an adoring New York press while capturing World Series titles with the Yankees, Williams toiled for a perennial bottom-dweller in the eight-team American League.  During his 21 seasons in Boston, the Red Sox appeared in only one World Series, losing in seven games to the St. Louis Cardinals on Enos Slaughter’s famous “Mad Dash.”  Williams was twice named AL MVP and was runner-up four times.  He won the Triple Crown twice – one of two players ever to accomplish that feat — yet was not voted MVP in either year. Going into the last day of the 1941 season – his third year in the league — Williams’ batting average stood at .39955.  Had he sat out, his average would have been rounded up to .400.  “If I’m going to hit .400,” said Williams, “I want more than my toenails on the line.”  The season finale was a double-header against Connie Mack’s Athletics at Shibe Park in Philadelphia.  On an overcast, raw day in Philly, Teddy Ballgame went 6-for-8 in two games to finish at .406.  No one has done it since.  The closest any player has come was 1980, when George Brett hit .390 for the Kansas City Royals.  In 1941, sacrifice flies were counted as at-bats.  Under today’s rules, Williams would have hit .415. Williams’ 1941 season is arguably the best offensive season of all time.  He hit .436 in May, batting a torrid .536 in the second half of the month.  He hit .470 against the Yankees, who won the pennant by 17 games behind a pitching staff that yielded the fewest runs and hits in the league.  “It was something that required a kind of nonstop consistency,” Williams said of his .406 season.  “I never thought of it as going 2-for-5 every day, but that’s what is adds up to.”  The Splinter went hitless in only 22 of the 143 games he played and his longest hitless streak was seven at-bats.  In 606 plate appearances, Williams collected 185 hits, drew 147 walks, struck out a miniscule 27 times and had an on-base percentage of .553.  Williams led the AL in hitting and home runs while missing the Triple Crown by just five RBI, yet Joe DiMaggio – who hit safely in 56 consecutive games – garnered twice the MVP votes as “Teddy Ballgame” in 1941. “If I’d have known hitting .400 was going to be such a big deal,” Williams said years later, “I would have done it again.”

Williams missed most of five seasons in the prime of his career to military service.  Between 1943 and 1945, he was a Navy fighter pilot.  In 1946 — after having not faced a major league pitcher for three years, Williams returned to bat .342 with 38 home runs and 123 RBI.  At the height of the Korean War in 1952, Williams was called to fly combat missions in a Marine fighter jet, costing him the better part of two seasons.  Teddy Ballgame collected 2,654 career hits.  During his first ten full big league seasons, he averaged 176 hits a year, meaning his military service cost him over 800 knocks.  Were it not for his five years overseas, Williams would have ended up with more than 3,500 hits.

Despite a lack of foot speed [Williams posted only one inside-the-park homer and stole a measly 24 bases over two decades] Williams posted a high batting average year in and year out.  In 1957, Williams batted .388 to lead the major leagues.  The following year, the 40-year-old hit .328 to win the AL batting crown.

The greatest hitter of all time may also be the best fisherman who ever lived.  “Ain’t no one in heaven or on earth ever knew more about fishing,” he boasted.  An avid life-long angler, Williams hosted a fishing show on television and is a member of the International Game Fish Association Hall of Fame.  His involvement with the Jimmy Fund helped raise millions of dollars for cancer care and research.  In 1991, Williams was presented the Presidential Medal of Freedom, the highest civilian award in the U.S.  He earned more than ten medals for his heroic military service with both the U.S. Navy and Marine Corps.  The Splendid Splinter was selected to Major League Baseball’s All-Time Team and All-Century Team.  The greatest player in Red Sox history had his Number 9 retired by Boston in 1984.  In 1966, he was inducted into the Baseball Hall of Fame on the first ballot.  Once vilified by the Boston press, Williams came to be revered as a baseball treasure.  In 1999, he threw out the ceremonial first pitch at the All-Star Game at Fenway Park.  The adulation he received from players, fans and coaches was spine-tingling, and remains one of the most iconic moments in All-Star Game history. “All I want out of life is that when I walk down the street folks will say, ‘There goes the greatest hitter that ever lived.’”