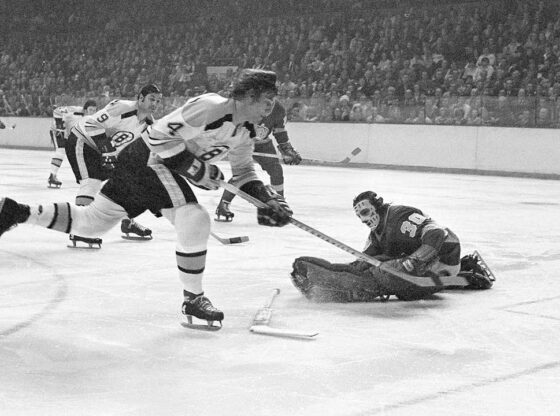 We appreciate greatness.  And nothing provides a better forum for displaying greatness than athletics.

Whether posted on the scoreboard, judge’s card or clock, sporting feats are measurable and on full display, for the world to see.  Which got us to thinking about the greatest single-season performances in history, many of which are simply mind-numbing.  In 1950, Sugar Ray Robinson went 19-0 with 12 knockouts en route to winning the world welterweight title.  Deacon Jones recorded 26 sacks in 14 games in 1967.

In 1970-71, Bobby Orr won the Hart [MVP], Norris [defenseman], Ross [scoring] and Conn Smythe [Playoff MVP] Trophies while leading the Boston Bruins to the Stanley Cup title.  How about the 1941 baseball season, when Ted Williams became the last player to bat over .400, the same year Joe DiMaggio hit in a record 56-straight games while winning AL MVP?

As good as those campaigns were – and they were remarkable – they didn’t even make our cut.  Here are the dozen most dominant seasons of all time.

Pete Maravich, 1969-70.  Pistol Pete was the greatest scorer in college basketball history.  In three seasons at LSU, the shaggy-haired, floppy-socked guard scored 3,667 points and averaged 44.2 points per game, still NCAA records.  Maravich’s best season came as a junior, when he poured in 1,381 points while averaging an NCAA single-season record 44.5 points per game, still the best in the annals of college hoops.  Pistol Pete scored 50 or more points on ten occasions and 60-plus three times.  Maravich scored big in every game he played.  Competing in an era before the three-point shot, his lowest single-game point total was 29.  To put that into perspective, Campbell’s Chris Clemons led the nation in scoring last season with 30 points per game.

Secretariat, 1973.  The greatest racehorse in history had a season for the ages in 1973, capturing the Triple Crown in dominating fashion.  Big Red set records in the Kentucky Derby, Preakness Stakes and Belmont Stakes that still stand today.  The chestnut colt won the first two legs of the Crown by 2 ½ lengths before obliterating the field at the Belmont by a record 31 lengths.  The only horse ever to break two minutes at Churchill Downs, Secretariat had a heart that weighed 22 pounds – more than twice the size of a typical thoroughbred.

Steffi Graf, 1988.  At 19, Graf became the first and only player to achieve the Golden Slam [all four majors plus an Olympic gold medal in the same season].  The 19-year-old Graf started by beating Chris Evert in straight sets at the Australian Open.  She then won the French by overwhelming Natasha Zvereva 6-0, 6-0 for the first double bagel in a major final in over 75 years.  Steffi came from a set down to beat Martina Navratilova at Wimbledon, then defeated Gabriela Sabatini in three sets to take the U.S. Open.  The German wunderkind finished the year 72-3 with 11 singles titles, including eight straight.

Dan Marino, 1984.  Long before the NFL turned into the pass-happy circus act that it has become, Marino became the first quarterback to eclipse 5,000 passing yards in a season.  The Miami Dolphins signal-caller set a single-season record for touchdowns [48] while completing 64 percent of his passes and averaging a whopping nine yards per attempt.  While Tom Brady threw 50 TD passes in 2007 and Payton Manning tossed 55 in 2013, Marino’s season still stands as the greatest in NFL history.

Babe Ruth, 1921:  The Bambino’s 59 home runs were more than every team but one hit in 1921.  Ruth led the league in RBI [171] and runs [177] while batting .378.  He walked a league-high 145 times, had 17 steals and amassed 457 total bases, a single-season record.  Babe’s 13.9 Wins Above Replacement not only led the league in 1921, it was the second-highest WAR in history.  Ruth led the league in eight offensive categories and his slugging and OPS percentages were both more than .200 points over the next-closest player.

Wayne Gretzky, 1981-82.  The Great One had so many spectacular seasons it is hard to pick his best.  In 1981-82, Gretzky broke the record for assists and points which he had set the year before.  His 92 goals shattered the previous mark of 76 set by Phil Esposito a decade earlier and his 212 points were 65 more than Mike Bossy, who finished second in the league.  The 20-year-old Gretzky set a record with ten hat tricks in a season, led the league with six short-handed goals and buried a dozen game-winners in 1981-82.

Wilt Chamberlain, 1961-62.  The most dominant player in NBA history posted his greatest season in 1961-62.  Chamberlain averaged 50.4 points and 25.6 rebounds per game to lead the league.  He tallied a record 4,026 points on the season, including an all-time single-game best 100 against the New York Knicks on March 2.  Wilt was wonderful, scoring over 50 points in 45 games.  To put that into perspective, no other player in NBA history has scored 50-plus points that many times in an entire career.

Tiger Woods, 2000.  Woods won nine of 20 PGA Tour events he entered in 2000, including three majors.  He set a Tour record for lowest scoring average [68.17] and was nearly invincible.  Woods won the U.S. Open at Pebble Beach by 15 shots, where he was the only player in the field to break par [he finished 12-under].  He took the British Open at St. Andrews by eight strokes then beat Bob May in a playoff to claim the PGA and join Ben Hogan as the only golfers to win three professional majors in one season.

Richard Petty, 1967.  The NASCAR legend won 27 of his 48 starts and finished in the top five in 38 races in 1967.  From August to October, The King won ten consecutive races, which remains a NASCAR record.  To put that into perspective, Jimmie Johnson won a total of 27 races in four seasons from 2006 -09 and won the Cup Series title all four years.  No driver will ever approach Petty’s 1967 season, when he finished in the top ten in 40 of 48 races.

Jimmy Connors, 1974.  Connors went 99-4 and won 15 tournaments in 1974, including three Grand Slam titles.  He seized the top ATP ranking that season, a position he held for a then-record 160 consecutive weeks from 1974 to 1977.  The southpaw would’ve been the favorite to win the ’74 French Open, but tournament organizers banned him from participating after he signed with World Team Tennis’ Baltimore Banners.

Barry Sanders, 1988.  Sanders’ 1988 season stands alone as the greatest individual performance in college football history.  He set 34 NCAA records that year on his way to winning the Heisman Trophy.  The Oklahoma State sensation rushed for 2,850 yards and 44 touchdowns.  Sanders returned the opening kickoff of the season 100 yards for a touchdown.  He rushed for over 200 yards in seven games and topped 300 yards four times.  Sanders capped off his memorable campaign with a 222-yard, five touchdown performance in the Holiday Bowl.

Lew Alcindor, 1966-67.  In his varsity debut as a sophomore [freshmen were ineligible at the time], Alcindor broke 19 UCLA records.  He averaged 29 points and 15.5 rebounds per game and shot .667 from the field.  the 7’1” center poured in 61 points against Washington State and led the Bruins to a 30-0 record and the national title.  Alcindor was named first-team All-American and national Player of the Year.  Following the 1966-67 season, the NCAA outlawed dunking.