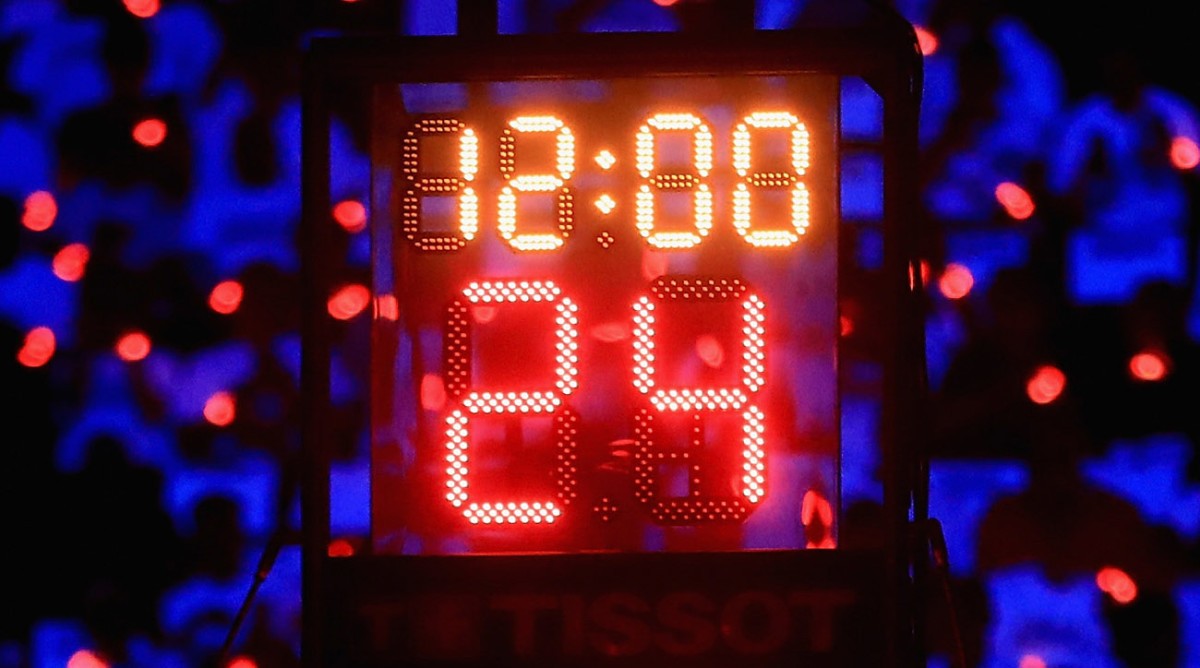 The 24-second clock saved the NBA.

The maximum time limit varies by level of play and league.  The NBA and WNBA have 24 second limits, while college basketball for both men and women has a 30 second limit.

Professional basketball was struggling in the early 1950s.  The NBA had a problem attracting fans and media coverage, as teams would run out the clock once they were leading in a game.  The game was dull, and often played at a snail’s pace.  The leading team would stall, passing the ball in an endless game of keep-away, without penalty.  The trailing team was forced to foul in an attempt to get the ball back following the free throw.  Low scoring, foul-plagued games were common, making pro basketball a bore.

In November 1950, the Fort Wayne Pistons defeated the Minneapolis Lakers, 19-18, in the lowest scoring game in league history.  The game was dull and slow with only four points being scored in the entire fourth quarter.  The Pistons attempted only 13 shots in the entire game, prompting the Minneapolis Tribune to write “the Pistons gave the NBA a great black eye.”

A few weeks later, the Rochester Royals and Indianapolis Olympians played a six-overtime game with only one shot attempted in each overtime.  The NBA tried several rule changes to speed up the game and reduce fouls, but to no avail.

The Syracuse Nationals then came to the rescue.  Looking to put a marketable product on the floor and take advantage of his team’s quickness, Nats owner Danny Biasone proposed a solution.  “I looked at the box scores from the games I enjoyed and noticed each team took about 60 shots,” said Biasone.  “That meant 120 shots per game.  So I took 2,880 seconds [48 minutes, the duration of an NBA game] and divided that by 120 shots.  The result was 24 seconds per shot.”

After experimenting with the 24-second shot clock during a scrimmage game, Biasone and Nationals GM, Leo Ferris, convinced the NBA to adopt it for the 1954-55 season.

When first introduced into the NBA, the shot clock hardly came into play.  Fearing a shot clock violation, players shot the ball quickly.  In the first year using the clock, NBA players shot, on average, within 20 seconds.  “We thought we had to take quick shots – a pass and a shot was it – maybe eight to ten seconds,” said Dolph Shayes, a 12-time All-Star who led the Nats to the 1955 NBA title.  With time, players learned they could work the ball around and get a good shot within the allotted time.

The advent of the shot clock led to an attendance increase of 40 percent within a few short years.  “Before the new rule, the last quarter could be deadly,” said guard Bob Cousy, whose legendary late-game dribbling tactics iced many games for the Boston Celtics.  “With the clock, we have constant action…it allowed the game to breathe and progress.”

The Association for Intercollegiate Athletics for Women [predecessor to the Women’s NCAA] adopted a 30-second shot clock in 1970.  The college men’s game, however, was slow to embrace the clock.  Fearful that smaller colleges would be unable to compete with powerhouses in a running game, men’s NCAA basketball continued playing without a shot clock long after most other leagues had implemented it.  North Carolina coach Dean Smith popularized the four corners offense, a stalling tactic designed to protect a lead, and used it to great success for decades.

Fifteen years after college women implemented the shot clock, the NCAA introduced a 45-second shot clock for the men’s game.  In 1993, the NCAA reduced the men’s clock to 35 seconds, then trimmed it to its current 30-second setting in 2015.

In March 2005, the city of Syracuse dedicated a monument in Armory Square in honor of the shot clock – and the role the town played in its advent.  The 24-second shot clock is running constantly, and is accompanied by a plaque commemorating the clock which changed basketball forever.  The ceremony was attended by Schayes, former Nats standout Earl Lloyd, and basketball hall-of-famers John Havlicek and Bill Walton.  “This is a very big piece of sports history, and it impacted the game at every level,” said Syracuse Parks Commissioner Pat Driscoll at the unveiling ceremony.

“This clock honors the rule that changed basketball and changed the National Basketball Association….Because of the vision and persistence of Danny Biasone, president and founder of the Syracuse Nationals, his fellow NBA owners embraced the shot clock, now used in some form on almost every level of the game.” – Shot Clock Plaque in Syracuse, New York.