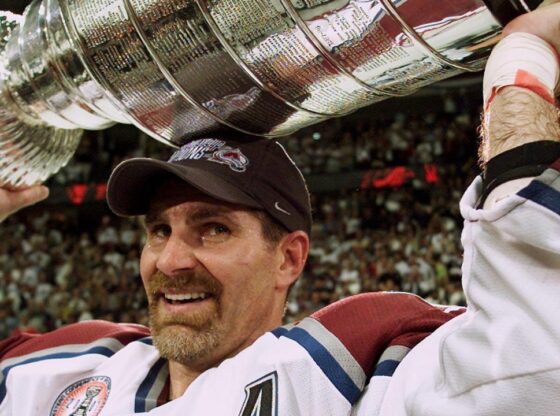 The best stories conclude with a fairy tale ending and no athletic career has ever ended better than that of Raymond Jean Bourque.

Bourque was born in Saint-Laurent, Quebec—a borough of Montreal—on this day in 1960. He was 15 years old when he joined the Trois Rivieres Draveurs of the Quebec Major Junior Hockey League but was traded to Sorel for high-scoring Ben Gosselin, who would play a total of seven career games in the NHL, midway through his rookie season. The Sorel Black Hawks moved to Verdun, a borough of Montreal, for the 1977-78 season and Bourque was named the QMJHL’s best defenseman in his first season in Verdun. The following year, he scored 31 goals and 96 points to lead the league and was again the best defenseman in the Quebec League. On August 9, 1979, the Boston Bruins selected Raymond Bourque with the eighth overall selection of the NHL Entry Draft.

Bourque made an immediate impact in Boston, scoring a goal in his first NHL game on October 11—a 4-0 win over the Winnipeg Jets in Boston Garden. The following evening, Larry Bird made his debut with the Celtics in the same building. Bourque asserted himself as one of the best defenseman in the league. He became a First Team All-Star selection and won the Calder Trophy as Rookie of the Year, marking the first time in NHL history a non-goaltender had achieved the distinction. Bourque’s 65 points in the 1979-80 season was a record at that time for a rookie defenseman. When Terry O’Reilly retired in 1985 and was made coach of the Bruins, Bourque and veteran Rick Middleton were named co-captains. Following Middleton’s retirement three years later, Bourque was made sole captain of the team, a position he would hold for the next 12 years. The Bruins assigned Bourque sweater number 7 when he joined the team in 1979, a number that had belonged to Phil Esposito during his hall of fame career in Boston. In December of 1987, Esposito’s number 7 was retired by the Bruins and Bourque, who could have continued wearing the number until his departure from Boston, decided to change numbers out of respect for Esposito. During the ceremony, Bourque skated to Esposito at center ice, took his sweater off, and handed it to the Bruins legend while revealing his new number—77—that he was wearing underneath. Bourque would wear number 77 for the remainder of his career.

Bourque’s offensive prowess and shooting ability as a defenseman drew comparisons to the great Bobby Orr [Daily Dose, August 26], a former Bruin who had revolutionized hockey. In 1987, he won the first of five Norris Trophys for best defenseman in the league, third most of all-time behind Orr [8] and Doug Harvey [7]. Three years later, Mark Messier [Daily Dose, July 3] narrowly edged Bourque for the Hart Trophy in the closest race ever for the league’s MVP award. In 21 seasons in Boston, the 6’0”, 217 pound defenseman only twice failed to make the playoffs and guided the Bruins to five conference championship series and two Stanley Cup Finals, losing to the Edmonton Oilers in both 1988 and 1990. A decade later, the Bruins were in ruins. Going nowhere, they traded their marquee player to the Colorado Avalanche on March 6, 2000. Colorado went 12-2-1 after the trade before losing to Dallas in the seventh game of the Western Conference finals. In 2000-01, Colorado had the best record in hockey and faced the defending champion New Jersey Devils in the Stanley Cup Finals. Led by Joe Sakic [Daily Dose, July 9] and Bourque, the Avs overcame a three-games-to-two deficit to win the series and hoist the Stanley Cup—a fitting finish to the final game of Mr. Bourque’s 22 year career.

Raymond Bourque is revered in Boston, the way Bobby Orr, Ted Williams, Larry Bird and Tom Brady are. He played in 1,612 games and has more more goals, assists and points than any defenseman in NHL history. “Plus-minus” is a hockey statistic that measures contribution to the team. A player is awarded a “plus” each time he is on the ice when his club scores an even-strength or short-handed goal. He receives a “minus” if he is on the ice when the opposing team scores an even-strength of short-handed goal. The difference is a player’s “plus-minus” statistic, and Ray Bourque has the third-best [528] plus-minus in NHL history, sandwiched between Bobby Orr and Wayne Gretzky. In 2004, Mr. Bourque was elected to the Hockey Hall of Fame in his first year of eligibility. The Boston Bruins and Colorado Avalanche have both retired his number 77 sweater.