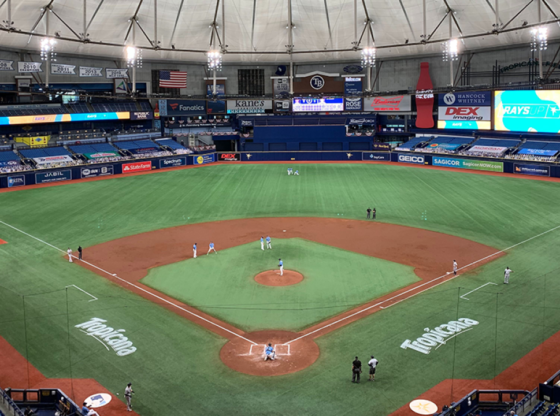 Sports venues are supposed to be places where rabid fans – short for fanatics – can rise up as one in support of the home team.  Some of the best include Fenway Park, Lambeau Field, Madison Square Garden and Wrigley Field.

Unfortunately, cities, teams – and building engineers —  don’t always get it right.  Here are A Dozen Duds — 12 of the worst stadiums in history.

Tropicana Field, home of the Tampa Bay Rays.  The most dreary setting in the big leagues looks like it should be part of a circus.  This venue is about as interesting as an airplane hangar.

Hubert H. Humphrey Metrodome, former home of the Minnesota Vikings and Twins.  A multi-purpose nightmare made of hefty bags and plastic, former Bears coach Mike Ditka said it was better suited for roller skating than football.  This dull relic was put out of its misery when it was demolished in 2014.

Candlestick Park, former home of the San Francisco Giants and 49ers.  How could one of America’s most beautiful cities be home to one of its ugliest stadiums?  With no views of the Bay and howling winds, the foggy, soggy place was even freezing in the summertime.

The Astrodome, former home of the Houston Astros, Oilers and Rockets.  Once touted as The Eighth Wonder of the World, this soulless cave brought artificial turf and domed stadiums to sports, truly a dark day for us all.

Colt Stadium, former home of the Houston Colt .45s.  Houston, we have a problem.  Before they were the Astros, Houston’s baseball team was called the Colt .45s.  The team played in Colt Stadium, a shade-less, single-deck wreck that stuck fans in a heat-and-humidity torture chamber [they sold insect repellant as a concession item].  When the Colt .45s moved into the Astrodome in 1965, they became the Astros.

Exhibition Stadium, former home of the Toronto Blue Jays and CFL Argonauts.  Built near the banks of Lake Ontario, this architectural travesty was covered entirely with snow for the inaugural Jays game in April 1977.  The grandstands at Exhibition Stadium faced each other, rather than the field, and were over 800 feet from the field.  The Jays new nest, Rogers Centre [formerly Skydome] is not much better.

Olympic Stadium, former home of the Montreal Expos.  Canada’s other engineering debacle is Stade Olympique.  Built as the main venue for the 1976 Summer Olympics, the “Big Owe” cost Canadian taxpayers a fortune but was a bust.  Cold and cavernous, Olympic Stadium was a disaster, and is the primary reason the Expos bolted for Washington after the 2004 season, to become the Nationals.

The Oakland Coliseum, home of the Raiders and Athletics  The only remaining stadium in the United States that is shared by pro football and baseball, this place is a dump.  The playing field is actually below sea level.  Opened in 1966, this concrete dinosaur is bad for watching football and even worse for baseball.  The once-proud A’s have been looking for a new home for over a decade, and the Raiders are leaving for Las Vegas after the 2019 season.

Oracle Arena, home of the Golden State Warriors.  While the Coliseum is bad, Oracle is worse.  Formerly known as the Oakland Arena and opened in 1966, it is the oldest venue in the NBA.  Adjacent to the Coliseum and precariously close to the Nimitz Freeway, the building will lose its primary tenant – the Warriors – when the team moves across the Bay to San Francisco for the 2018-19 season.

Kingdome, former home of the Seattle Seahawks, Mariners, and SuperSonics  This wretched hunk of concrete was dimly lit and had one of the worst playing surfaces in sports.  While the Kingdome was a fitting home for Boz, Steve Largent, Kenny Easley as well as Junior and the Big Unit deserved a better venue.  Imploded in 2000, the Kingdome sat on the current site of Century Link Field, home of the NFL Seahawks.

Nassau County Coliseum, part-time home of the New York Islanders.  Born in the shag carpet, polyester-plaid 1970s, this place was practically obsolete when it opened.  Even die-hard Islanders fans – who saw four straight Stanley Cup championship banners raised in this building between 1980 and 1984 – consider Nassau Coliseum an abomination.

Veteran’s Stadium, former home of the Philadelphia Eagles and Phillies.  Along with Three Rivers Stadium in Pittsburgh and Cincinnati’s Riverfront Stadium,  “The Vet” was the worst of the dreaded cookie cutter multi-purpose stadiums of the early 1970s.  All were swirls of steel and artificial turf, completely devoid of personality.  The Vet is the only one of the trio not alongside a river, making it the worst of the bunch. 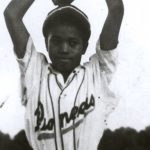