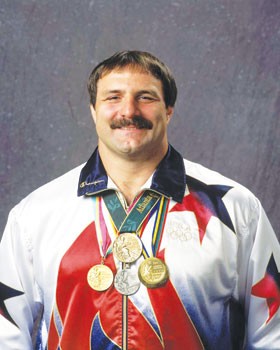 Born in Haledon, New Jersey on this date in 1960, he was too heavy to play youth football and had no interest in participating in Little League baseball. Baumgartner weighed 190 pounds in ninth grade so he decided to put his size to use and went out for Manchester Regional High School’s wrestling team. During the off-season he threw shot put and discus on the track team, setting several records in the shot put and placing third in the state meet. As a senior, Baumgartner went 23-0 before losing in the New Jersey State Championship match to finish third. In 1978, he won the Junior National Championship before enrolling at Indiana State University in August. Baumgartner joined the Sycamores’ wrestling team and, in the summer between his sophomore and junior years, qualified as an alternate for the 1980 U.S. Olympic team but did not compete in the Moscow Games due to the U.S. boycott. He earned the first of his seventeen U.S. National freestyle titles in 1980 as well as winning the prestigious Midlands Championship—a title he would keep for eight straight years–then prevailed at the World University Games in Romania one year later. Dan Cook beat Baumgartner at the 1981 AAU national championship, marking the last time Baumgartner would lose to an American opponent in his next 140 matches. As a college senior, Baumgartner went 44-0 and finally won the NCAA heavyweight title after finishing as runner-up the two previous years. He finished his four year career at Indiana State with a record of 134-12 and 73 pins, while compiling a 3.77 GPA in route to earning a B.S. degree in industrial arts education.

Upon graduation from ISU, Baumgartner served as a graduate assistant with Oklahoma State’s wrestling team while pursuing a master’s degree and continued to train. He won a bronze medal at the 1983 World Championships, silver at the ’83 Pan Am Games and gold at the 1984 Olympic Games in Los Angeles, which he later described as “the turning point of my career.” Baumgartner won bronze at the 1985 World Championships and earned a silver medal in the ’88 Games in Seoul, losing to Davit Gobejishvili. Four years later, he won the rematch in Barcelona before earning his second Olympic gold. After winning the World Championships in 1993 and 1995, Bruce Baumgartner qualified for his fourth consecutive U.S. Olympic wrestling team. The 1996 Summer Games were held in Atlanta—the second time he would compete for Olympic glory on American soil—and Baumgartner was selected to carry the flag for the U.S. team during opening ceremonies. The 6’2”, 287 pound super-heavyweight finished third to earn his fourth Olympic medal and become the most decorated American wrestler in history before retiring from the sport in 1987.

Bruce Baumgartner won three World Championships, two Olympic gold medals, three Pan American Games titles, 17 American titles, two AAU National Championships and one Junior National crown. He competed in four Olympic Games—winning four medals—and is the first wrestler to win the Sullivan Award as the outstanding athlete in the U.S. In 1999, Baumgartner was inducted into the Indiana State University Hall of Fame and he is also a member of the U.S. Olympic, National Wrestling and International Wrestling Federation Halls of Fame. Mr. Baumgartner is currently Director of Athletics for Edinboro University near Erie, Pennsylvania.