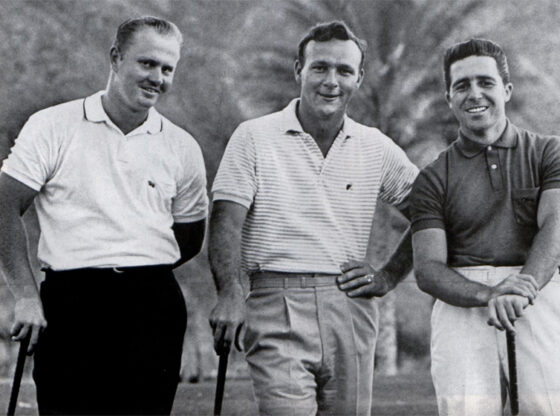 In November 2018, we brought you Dominant Duos, the two most magnificent number-one and number-two starting pitchers ever to grace an MLB mound.  Last month we brought you Top Tandems, the greatest pairings in sports history.  Today we deliver a third iteration: triplets – the top sporting trios ever assembled.

Some of sports’ most tremendous triumvirates didn’t make the list.  The trilogy of Jerry West, Wilt Chamberlain and Elgin Baylor are arguably three of the four faces on the Lakers Mount Rushmore but never delivered a title.  When LeBron, Chris Bosh, and D-Wade arrived in South Beach in 2010, they changed the NBA for good.  And three generations of Carays – Harry, Chip and Skip – have delivered some of the most memorable play-by-play calls in baseball history.

Dubbed The Triplets, quarterback Troy Aikman, running back Emmitt Smith and wide receiver Michael Irvin formed the nucleus of the last great Dallas Cowboys teams.  Taken in the first round in three successive drafts from 1988 to 1990, this triad guided the Cowboys to three Super Bowl titles in four years.  They played in 19 Pro Bowls between them.  Aikman and Smith were both Super Bowl MVPs and all three landed in the Pro Football Hall of Fame.

Tim Duncan, Tony Parker and Manu Ginobili played together with the San Antonio Spurs from 2002 through 2016.  The Big Three helped the Spurs to four NBA championships.  This group won 575 regular season and 126 postseason games together and formed one of the most decorated trios in NBA history.

The Big Three moniker was given to Jack Nicklaus, Arnold Palmer and Gary Player in the early 1960s by their shared manager, Mark McCormack.  The name is fitting, as the three dominated golf like no other trinity in history.  With 18 major titles and 70 Tour wins, Nicklaus is the game’s G.O.A.T.  He and Player are two of only five golfers to have achieved the career Grand Slam and Arnie is the most charismatic player in history.  Collectively, these greats combined to win 34 majors and 156 Tour events.

Between 1993 and 2002, the Atlanta Braves featured perhaps the finest starting staff ever assembled.  Greg Maddux was a master of control.  Hard-throwing John Smoltz was a strikeout machine.  And Tom Glavine was an artful lefty.  The troika combined to win five Cy Young Awards in six seasons and 469 wins.  These artists, who each posted ERAs under 3.00 in 1996, led Atlanta to nine division crowns and the 1995 World Series title.

Led by Wayne Gretzky, Jari Kurri, and Mark Messier, the Edmonton Oilers dominated the NHL in the 1980s.  They won their first Stanley Cup in 1994, with each scoring over 100 points and The Great One notching more than 200.  The Oilers repeated in 1985, then won back-to-back Cups in 1987 and ’88 with all three stars scoring over 100 points again in 1987.  Gretzky, Kurri and Messier are the top three points leaders in Oilers franchise history.

The Roger Federer, Rafael Nadal and Novak Djokovic era is the greatest in tennis history.  The triumvirate has dominated the last decade, maintaining an unprecedented stranglehold on the sport.  The 38-year Federer has won 20 Grand Slam singles titles, more than any player in history.  Nadal is right behind, with 19.  At 33, Rafa is still on top of his game, having captured a record 12 of 15 French Opens since turning pro.  Not to be outdone, Djovick has 16 Grand Slam singles titles [two more than the great Pete Sampras, who is fourth on the all-time list] and has captured nine in the past five years.

While other infields combined to record more double plays, the Chicago Cubs’ triad of shortstop Joe Tinker, second baseman Johnny Evers and first baseman Frank Chance is the most famous.  These three players helped the Cubbies win four National League championships and two World Series from 1906 to 1910.  Immortalized in the 1910 poem Baseball’s Sad Lexicon, Tinkers-to-Evers-to-Chance has become a metaphor for teamwork and precision.

In October 2019 we listed Larry Csonka and Mercury Morris as a Top Tandem.  Today we add a third running back – the versatile Jim Kiick – turning our duo into a trio.  These running backs formed the “Three Headed Monster” that led the Miami Dolphins to three straight Super Bowls and a perfect season in 1972.  Kiick led the AFL in rushing touchdowns in 1969 and amassed over 1,000 total yards in four straight seasons.  A sizzling kick returner, Morris twice compiled over 1,000 total yards.  Zonk was a bruiser who rushed for more than 1,000 three times on his way to the Hall of Fame.

The Production Line was one of the most famous scoring lines in NHL history.  Gordie Howe was at right wing, Sid Abel played center and Ted Lindsay manned left wing.  This group led the Detroit Red Wings to the 1950 Stanley Cup while finishing 1-2-3 in points scored, a feat not likely ever to be matched again.  Howe, Abel and Lindsay led the Wings to another Cup in 1952 before landing in the Hockey Hall of Fame.

New York laid claim to three of the greatest center fielders of all time in the 1950s: Mickey, Willie and The Duke.  The immensely-talented Mantle played for the Yankees where, in 1956, he won the Triple Crown and AL MVP.  Two years earlier, Mays led the NL in triples, batting average, slugging and OPS.  Baseball’s greatest living ballplayer also hit 41 homers, drove in 110 runs and was named league MVP.  In 1955, Duke Snider led the Dodgers to their only World Series title while the team was in Brooklyn.  That season, Snider led the NL in runs and RBI while finishing second to teammate Roy Campanella in MVP voting.