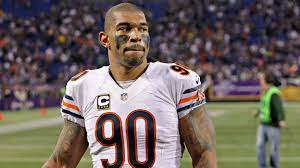 Several NFL legends started as basketball players.  Most became tight ends, but one went on to become one of the greatest defensive players in NFL history.

Julius Frazier Peppers was named for two hoops legends—Julius Erving and Walt Frazier [Daily Dose, 11/21/16].   Basketball was his first love and Michael Jordan was his idol.  He grew up in the heart of Tobacco Road, the basketball-rich area of North Carolina that is home to Duke, North Carolina State, and the University of North Carolina, and was bouncing a basketball at about the same time he was learning to walk.

Born in Wilson, North Carolina–40 miles east of the capital city of Raleigh– on this date in 1980, as Julius George Kurney and Bessie Peppers’ only child.  He grew up in tiny Bailey, a one-diner town about a half-hour’s drive from Chapel Hill, where he attended Southern Nash High School.  Nicknamed “Big Head” because of the size of his cranium, the athletically-gifted Peppers had grown to 6’5” and 225 pounds by the start of ninth grade.  Although he had never played football, Peppers was convinced to join the varsity team by Southern Nash football coach Ray Davis, who offered to make him a running back.  Peppers was a two-way star, rushing for over 3,500 yards and scoring  46 career touchdowns while wreaking havoc as a defensive lineman.  As a senior, he was named to the Parade All-America team.  A good shooter with tremendous leaping ability, Peppers was a four-time all-conference power forward who scored over 1,600 points, grabbed more than 800 rebounds, and handed out 200 assists for Southern Nash.  He led the Firebirds to the first state track title in school history as part of the 4 x 400 meter relay team, while also finishing second in the triple jump.  After starring in three sports as a senior, Peppers was named 1998 North Carolina High School Athlete of the Year.  Big Head was highly recruited to play basketball—Duke coach Mike Krzyzewski coveted him as a Blue Devil–but he decided to attend the University of North Carolina and play football for head coach Carl Torbush, who had no qualms about Peppers also playing basketball.

As a UNC freshman, Julius Peppers was a football redshirt and did not go out for the Tar Heels basketball team.  He made his football debut in 1999, where he was named freshman All-American after leading the team in sacks and tackles for loss.  Following the season, he joined the basketball team and helped the Tar Heels reach the Final Four, where they lost to Florida.  As a sophomore, Peppers led the nation in quarterback sacks and was named All-ACC as well as second-team All-American.  When the football season was over, he rejoined the basketball team, averaging 7.1 points and 4.0 rebounds per game while leading the Heels in field goal percentage.  In the second round of the NCAA tournament [Daily Dose, 12/27/16], Julius scored 18 points and hauled in ten rebounds in a losing effort to Penn State.  It would prove to be his final college basketball game, as Peppers realized missing spring football practice to play hoops might compromise his dream of playing in the NFL.

Peppers was the most dominant defensive player in the country in 2001, drawing comparisons to former Tar Heel and NFL hall-of-famer Lawrence Taylor.  After finishing his junior season with 30.5 career sacks—second-most in school history, behind Taylor—he was named first-team All-American.  Peppers also earned several post-season honors, including the Chuck Bednarik Award as the nation’s top defensive player, Lombardi Award as the best collegiate lineman and the Bill Willis Trophy as the nation’s best defensive lineman.  He left Carolina after having started 33 of the 34 games in which he played.

The Carolina Panthers selected Peppers with the second overall pick of the 2002 NFL Draft, sandwiched between quarterbacks David Carr and Joey Harrington.  He made an immediate impact, helping the Panthers defense rise from being worst in the league to second-best, and was named NFL Defensive Rookie of the Year.  The following season, he led the Panthers to the Super Bowl, where they lost to the New England Patriots on a last-second field goal, 32-29.  He was named NFL Defensive Player of the Year in 2004 after amassing 143 total interception yards, including a 97-yard “pick-six”–both NFL records for a defensive lineman.  Peppers recorded a career-best 14.5 sacks in 2008 and was named to his fourth Pro Bowl team.  Prior to the 2010 season, he signed as a free agent with the Chicago Bears.

“Jay-Pep” was named first team All-Pro after leading the Bears to the 2010 NFC title game, where they lost to the Green Bay Packers, 21-14.  He played four seasons in Chicago and recorded 37.5 sacks while never missing a game before the Bears released him in March 2014.  He was immediately signed by the Green Bay Packers, who moved him from defensive end to outside linebacker.  In his fifth game as a Packer, Peppers returned an interception 49 yards for a touchdown to become the first player in NFL history to record at least 100 sacks and ten interceptions in a career.  He was named to his ninth Pro Bowl team in 2015 and, in 2016, recorded his 142nd sack to pass Michael Strahan and move into fifth place on the all-time list.

At 6’7”, 287 pounds, Julius Peppers is a freak of nature.  He ran 4.68 at the 2002 pre-draft scouting combine, has arms that are over 34 inches long, and is a relentless pass rusher.  Peppers has 35 career multiple-sack games and is the only player in NFL history with over 100 sacks and four interception returns for touchdowns.  No defensive lineman in the history of the league has more interception return yards than Mr. Peppers and only one defensive player—at any position—has blocked more kicks.   It has become fashionable for NFL scouts to look for football talent on the basketball court.  Tony Gonzalez, Antonio Gates, and Jimmy Graham are all college basketball players who became NFL Pro Bowlers, but did so as tight ends.  Julius Peppers did it on the other side of the ball, and is the greatest defensive player in Carolina Panthers franchise history.

Happy 37th birthday to a superb player and future NFL hall of famer.