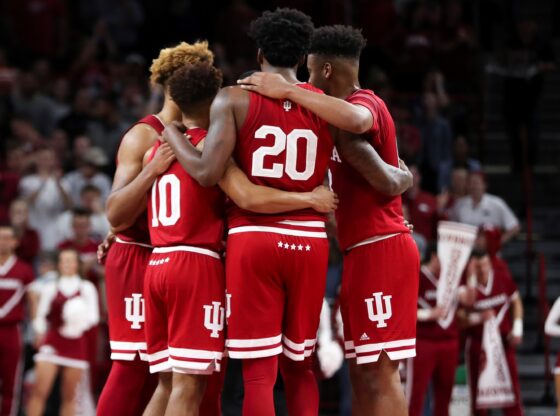 Indiana University has one of the most storied programs in college basketball history.

The Indiana Hoosiers fielded their first men’s basketball team in the 1900-01 season, with head coach James Horne leading them to a 1-4 record while playing in the 600-seat Men’s Gymnasium—the original Assembly Hall.  In 1917, they moved into the “New Gym,” a 2,400-seat facility that featured the nation’s first glass backboards and home to Everett Dean, a three-year letterman and IU’s first All-American.  From 1928 to 1971, the Hoosiers played home games in facilities that now host intramural and indoor track & field events before moving into their current arena, Assembly Hall, for the 1971-72 season.  The “Carnegie Hall of Basketball” is a 17,472 seat facility built on the north end of the Bloomington campus.  The court is named after Branch McCracken, who played and coached at Indiana before becoming the first Hoosier ever inducted into the basketball Hall of Fame, in 1960.  Assembly Hall is one of the loudest venues in college basketball and was ranked by ESPN as providing the third-best home court advantage in the country, behind Kansas’ Allen Field House and Cameron Indoor Stadium at Duke University.

Some of the best coaches in history have mentored IU teams.  After leading IU to three Big Ten championships and earning All-American honors as a player in 1921, Everett Dean served as Indiana’s baseball and basketball coach from 1924 to 1938, guiding the hoopsters to a record of 162-93.  Dean then coached Stanford to the 1942 NCAA basketball title and is the only coach in both the Naismith Basketball and College Baseball Halls of Fame.  Emmett B. “Branch” McCracken succeeded Dean in 1938 and had two coaching stints, 1938-43 and 1946-65—taking time in-between to serve as a lieutenant in the U.S. Navy during World War II.  As a player, McCracken graduated as the Big Ten’s all-time leading scorer before playing professionally with John Wooden [Daily Dose, October 14] for the Indianapolis Kautskys.   As a coach, he installed an up-tempo, fast-break style of play and led the “Hurryin’ Hoosiers” to four Big Ten titles as well as two NCAA championships–in 1940 and 1953—while going 364-174 in Bloomington.  Robert Montgomery Knight took over Indiana’s program in 1971, bringing it to the pinnacle of college basketball with three national titles, eleven Big Ten championships and one NIT crown in his 29 seasons.  Knight’s teams won 20 or more games in 22 seasons and had a remarkable winning percentage of .735.  “The General” was 662-239 at Indiana, mentored ten conference MVPs and was named National Coach of the Year four times.  Under Knight, the 1974-75 Hoosiers went 31-1 and featured four of the five starters on the All-Big 10 team.  The following year, they were the greatest team in college basketball history and remain the last college team to finish the season undefeated, at 32-0.  Indiana has had 28 head basketball coaches in 115 years.

Indiana basketball has 48 players in its 1,000-Point Club, while five IU players have scored 2,000 or more points during their college careers.  Calbert Chaney, the Big Ten’s all-time leading scorer, tops the list with 2,613 points and three IU players have collected over 1,000 career rebounds.  The Hoosiers’ biggest conference rival is Purdue, while their most-hated out-of-conference foe is Kentucky.  Indiana has the winningest program in Big Ten history and has more NCAA appearances [38], wins [64] and Final Fours [8] than any school in the conference.  The Hoosiers have won 21 Big Ten crowns, feature four National Player of the Year award recipients and boast seven Naismith Hall of Famers.  Five Hoosiers have won gold medals in Olympic basketball and the program has produced 44 All-Americans.

IU basketball traditions include candy-striped warm up pants and simple, clean jerseys that do not feature players’ names on the back.  Indiana’s principle is “team over player”—the athletes play for the team on the front of the jersey, not the individual on the back.  IU has never retired a jersey number and their minimalist look is the “anti-Oregon.”  Beginning in the mid-1970s, television broadcasts of Indiana basketball games opened with a lady named “Martha” sweeping the floors of Assembly Hall while whistling and singing the school’s fight song, “Indiana, Our Indiana.”  Today, a copy of the original is shown on the videoboard that hangs above center court just before the Hoosiers take the floor.  During the third timeout of the second half of every home game, IU’s pep band performs the “William Tell Overture,” with cheerleaders racing around the court waving Indiana flags.  Former CBS analyst and Hall of Famer Billy Packer called it, “the greatest timeout in the country.”

This is an important week in Indiana basketball history.  On March 29, 1976, the Hoosiers beat Michigan for the NCAA championship.  Five years later, they downed North Carolina on March 30 to take the title and, on March 31, 1987, Keith Smart hit a baseline jumper to beat Syracuse and give Indiana their third NCAA crown in eleven years.