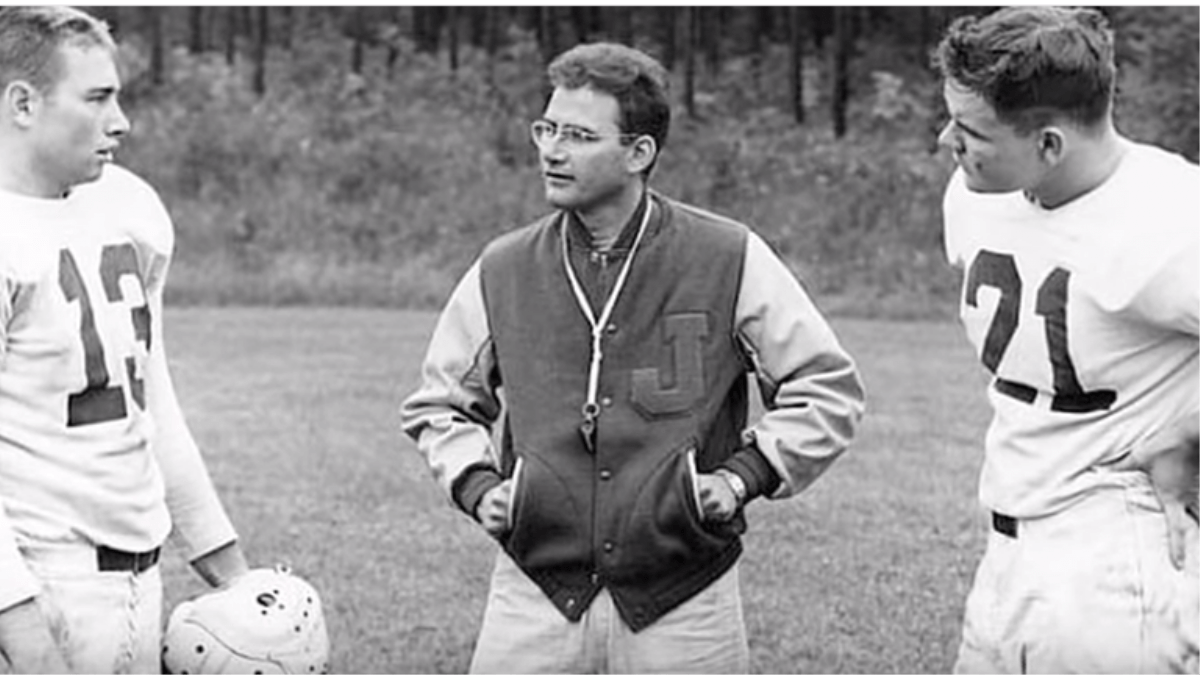 John Gagliardi is the winningest coach in college football history.

Gagliardi [Guh-lahr-dee] coached college football for 64 years, surpassing the record held by Amos Alonzo Stagg, who coached 57 years at the University of Chicago and University of Pacific.  In over six decades of coaching, Gagliardi compiled a record of 489-138-11. That’s more than Joe Paterno, Bobby Bowden or Eddie Robinson.  Gagliardi’s winning percentage of .775 places him behind only Larry Kehres and Bear Bryant among coaches with 300 or more wins.  His teams won 31 conference titles, four national championships, and had only three losing seasons in 64 years.

Gagliardi’s career began at Holy Trinity High School in Trinidad, Colorado, in 1943 where, at 16, he became the head coach of his high school team.  A captain, he took over when the team’s head coach was drafted into World War II.  He wound up coaching there and at St. Mary’s High School in Colorado Springs for six years.  In 1949, he got his first college job at Carroll College in Helena, Montana, leading the Saints to three conference titles in four seasons.

In 1953, Gagliardi took the reins at St. John’s University, signing on to coach football and ice hockey for $ 4,200 a year.  He succeeded Johnny McNally [aka Johnny Blood] a member of the Pro Football Hall of Fame.  McNally, who had starred as a halfback at St. John’s in the 1920s before becoming an early NFL legend, told Gagliardi that “nobody can win at St. John’s.”

St. Johns’ is a Benedictine Catholic men’s university and monastary with just under 2,000 students.  The quiet, picturesque campus sits 70 miles northwest of Minneapolis and has an annual tuition of $ 45,000.  A Division III school and member of the Minnesota Intercollegiate Athletic Conference, St. John’s does not offer scholarships.

Gagliardi’s approach to coaching was unconventional.  He employed a style which he called Winning with No’s and insisted his players call him John, not Coach.  There was no yelling, no tackling during practice, no whistles and no wind sprints.  The Johnnies had no team captains, no playbook and eschewed calisthenics.  Gagliardi placed trust in his players.  His quarterbacks called their own plays, which is unheard-of in football today – especially at the college level.  “The military has been plucking kids off farms for years and teaching them to drive tanks and fly planes,” said Gagliardi, “so teaching them to play football shouldn’t be that hard.”

A college head coach from age 22 to 86, John Gagliardi never served as an assistant.  He had chances to leave St. John’s.  Before Notre Dame hired Ara Parseghian in 1964, Gagliardi was approached by a Fighting Irish alum about the job.  He rejected Bud Grant’s offer to join the Minnesota Vikings’ staff in 1985. The closest Gagliardi came to leaving was in the early 1980s, when he turned down the University of San Diego, despite their offer of more money and endless sunshine.

Born to Italian immigrants November 1, 1926, Gagliardi’s mom died at 99.  His dad lived to be 86 even though he never visited a doctor.  Gagliardi coached 60 seasons at St. John’s, the longest any coach – at any level – has been at one school.  He coached his grandson as well as the grandchild of a former player.

Under Gagliardi, the Johnnies won 27 conference championships, and national titles in 1963, 1965, 1976 and 2003.  The campus bookstore sold T-shirts emblazoned with the coach’s picture that read Legend.  Between 1995 and 2015, Mount Union – the 12-time Division III national champion, was held to ten or fewer points just three times.  Two of those came against the Johnnies.

In the Theory of Football class he taught each spring, Gagliardi told his female students from sister school College of Saint Benedict to consider marrying a football player.  He suggested offensive lineman because of their unselfishness and listening skills.  “They do all the work and never expect any credit,” he told the young ladies.  “They do as they’re told.  They are going to be perfect husbands because they’ll never make a squawk.  The only problem is they’ll never make the first move, either.  Ain’t no way they’re going to ask you on a date.”

Gagliardi was inducted into the College Football Hall of Fame in 2006, becoming the first active coach to be enshrined.  Since 1993, the Gagliardi Trophy has been awarded annually to the most outstanding player in NCAA Division III football.

On November 19, 2012, Mr. Gagliardi announced his retirement from coaching.  “Arguably, John Gagliardi has impacted the lives of as many young men as any individual in the history of St. John’s University,” said school president Michael Hemesath at the time of the retirement announcement.  “His legacy of educating young men at St. John’s is one that any coach or professor would envy.”

John Gagliardi remained a faculty member at St. John’s until 2015, when he stepped away from teaching.  Still active at 91, he wants his tombstone to read I’d Rather Be Coaching.