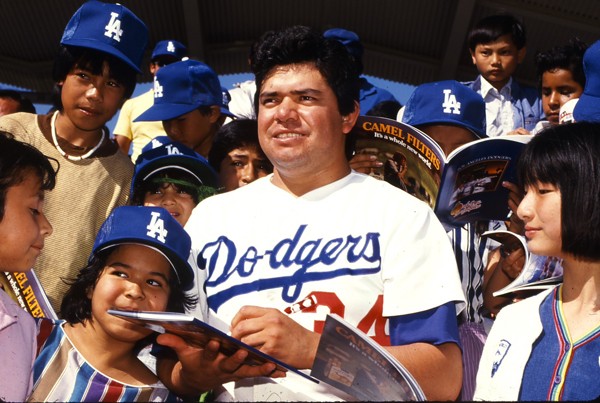 Fernando Valenzuela is the only player in baseball history to win the Cy Young and Rookie of the Year awards in the same season.

In the summer of 1981, a pudgy Yaqui Indian from a poor farming village in Mexico rose from relative obscurity to superstardom.  Fernando Valenzuela was a left-handed pitcher for the Los Angeles Dodgers.  Featuring an almost unhittable screwball and a funky windup during which his eyes rolled up into his head as if he were looking to the heavens for guidance, he turned the baseball world upside down while creating a phenomenon known as Fernandomania.

In the 1970s, looking to appeal to the large Latino population in Los Angeles, Dodgers owner Walter O’Malley instructed his management team to find the “Mexican Sandy Koufax.”  Dodger scout Mike Brito spent dusty summers prospecting for such a player.  In 1978, in the tiny town of Etchohuaquila, Mexico – 250 miles south of Tucson — he found one.

Valenzuela, the youngest of 12 children born and raised in an adobe hut, joined the Dodgers as a September call-up at the end of the 1980 season.  After making ten scoreless appearances, he was slated to be the number-three starter in 1981.  After Dodgers ace Jerry Reuss tweaked a calf muscle hours before his scheduled Opening Day start on April 9, manager Tommy Lasorda turned to his 20-year-old rookie to face the defending National League West champion Houston Astros.

Valenzuela became the first pitcher to win his first eight career starts since Dave “Boo” Ferris did it in 1945 for the Boston Red Sox.  Fernandomania was born.  A media crush awaited Valenzuela wherever the Dodgers traveled.  Press conferences were arranged in every city and Valenzuela, who spoke little English, relied on Dodgers Spanish-language broadcaster Jamie Jarrin to serve as his interpreter.

Dodger Stadium turned into a Cinco de Mayo celebration every time Valenzuela pitched.  Attendance at Dodger road games jumped by 10,000 whenever Fernando was scheduled to throw.  The Dodger organist played bullfighting music to accompany Valenzuela – whose nickname was El Toro – during his trip from the dugout to the mound.  During home games, the ABBA hit Fernando blared over the PA system at Chavez Ravine as he warmed up between innings.

The humble and relatable youngster handled the attention with incredible maturity.  Valenzuela became an inspiration to the Mexican-American community in Los Angeles and throughout the U.S., helping to instill a feeling of unity and optimism.  In the middle of the 1981 season, President Ronald Reagan invited him to the White House for a luncheon with Mexican President Jose Lopez Portillo.

Despite the players’ strike in 1981, which wiped out nearly 40 percent of the season, Valenzuela went on to set a new National League rookie record with eight shutouts.  He finished the year 13-7 with a 2.48 ERA.  Making the major league minimum salary of $ 32,000, Valenzuela became the first rookie to lead the league in strikeouts.  The husky southpaw led the NL in complete games and innings pitched, and became the first player to win both the NL Cy Young and Rookie of the Year awards.

The Dodgers went on to win the National League pennant in 1981.  After losing the first two games of the World Series to the New York Yankees, Valenzuela – who became the youngest pitcher to start the first game of a Fall Classic — took the mound for Game 3.  Despite having sub-par stuff, Fernando grinded out a complete game win to jump-start the Dodgers to the first of four straight wins en route to their first World Series title since 1965.

Valenzuela went 3-1 during the 1981 postseason.  A fine hitter, he batted .250 and struck out just nine times in 64 at-bats, earning him the NL Silver Slugger Award as the best-hitting pitcher in the league.

Fernando Valenzuela pitched 17 years in the big leagues, yet never quite matched the greatness of his early years with the Dodgers.  He was a National League All-Star each season from 1981 to 1986.  In June 1990, the portly portsider threw a no-hitter on the same day as Dave Stewart.  The screwball takes its toll on a pitcher’s elbow, and the Dodgers released Valenzuela during spring training in 1991.  Over the next several seasons, he bounced around with five teams and retired after the 1997 campaign.  In 2003, he returned to Los Angeles, working with Jarrin on the Dodgers’ Spanish-language broadcasting team.  Mr. Valenzuela became a naturalized American citizen in 2015.

Like Mark “The Bird” Fidrych five years earlier, Fernando Valenzuela was a cultural phenomenon during his breakout season in the summer of 1981.  Fernandomania inspired Latino communities across the country and was especially prominent in Southern California.  Today, over half of the four million fans that pour into Chavez Ravine to root for Los Doyers each baseball season are Latino.

On this date in 1981, Fernando Valenzuela threw eight-and-two-thirds innings of four-hit baseball to beat the St. Louis Cardinals, 3-2, and notch his tenth win of the season.