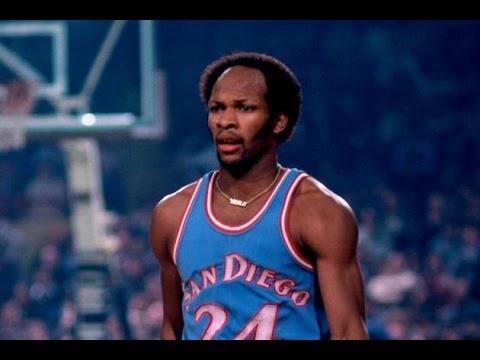 While not much of a passer, defender or rebounder, World B. Free could score from anywhere.

One of the game’s most prolific scorers in the late 1970s and early ‘80s, World B. Free entered the NBA the season before the 1976 merger and retired in 1988 as Michael Jordan was emerging as the greatest player in history.  He began his playing career alongside Julius Erving in Philadelphia.  Still regarded as a Sixer, Free also had stints with the Clippers, Warriors, Cavaliers and Rockets.

Possessing a contagious personality and run-and-gun style, Free featured a trademark jumper that he launched from behind his head.  A soft, high-arcing lob that seemed to stay in the air forever, his shot produced string music – splashing through the net while barely touching the nylon.  Free never met a shot he didn’t like.  As a youngster on the playgrounds of New York City, his jumper was a flat line-drive.  Tired of having his shots blocked, he perfected the high floater for which he came to be known.

A 6’2” point guard, Lloyd Free was an explosive leaper with a 44-inch vertical jump.  He was a playground legend who could perform 360-degree dunks as a middle schooler.  “The fellas back in Brownsville gave me the nickname World when I was in junior high,” said Free.  “They just started calling me All-World because “All-City” and “All-County” and things like that weren’t good enough.  Finally, they just started calling me World.”

World B. Free was one of the great personalities of his era.  He served as a forerunner of the Shaquille O’Neal NBA persona.  He was bigger than life.

Playing in a day when the three-point line did not yet exist, Free became the 39th player in NBA history to surpass 15,000 career points.  Sporting a gold chain and sharp sideburns, the Prince of Midair was a joy to watch and nearly impossible to stop when he got going.  In 13 NBA seasons, Free finished in the top 15 in league in scoring eight straight years.  He twice scored a career-high 49 points in a game and had sixteen 40-point games in his career.

As a freshman, he teamed with future Boston Celtic standout M.L. Carr to lead the Quakers to the 1973 NAIA title, becoming the only frosh ever named tournament MVP.  An All-American in both his sophomore and junior seasons, Free is Guilford’s all-time scoring average leader at 23.6 points per game.

There’s no doubt I ran my mouth too much early in my career…I think all that talking made people overlook some things about me.

After being named NAIA Player of the Year in 1975, the Philadelphia 76ers selected Lloyd Free with the 23rdoverall pick of the NBA draft.  A deadly scorer, he came off the bench for a talented Sixers squad.  After earning a spot on the 1976 All-Rookie Team, Free helped Philly reach the 1977 Finals, where they were beaten by Bill Walton and the Portland Trail Blazers.

Philadelphia traded Lloyd Free to the Clippers in 1978 for a future draft pick that would become Charles Barkley in 1984.  He enjoyed his two finest seasons in San Diego, where he twice finished second to George Gervin for the NBA scoring title.  Free led the league in free throws in both seasons as a Clipper.  In 1980, he averaged over 30 points and four assists per game to earn his only career All-Star nod.

In 1981 – on the day before his 28th birthday, Free legally changed his first name to World. “At first, people thought it was a ‘self-proclaimed’ name,” Free would later say.  “The name was given to me from the streets of Brooklyn, in the Brownsville section…anyone who had a little bit of greatness about them back then, they would nickname.”

I was a big part of helping them keep basketball alive in the city of Cleveland.

World B. Free helped save basketball in Cleveland.  The franchise was a disaster in the early 1980s.  The Cavaliers regularly drew fewer than 2,000 fans to suburban Richfield Coliseum and the team was getting ready to move to another city.  Cleveland traded for Free, who electrified the crowd while averaging better than 23 points a night.  In 1985 – the season during which LeBron James was born–  the Cavs made their first playoff run in nearly a decade.  Basketball was back along the banks of Lake Erie.  In 1994, the team moved into a new downtown arena.

After four seasons in Cleveland, Free returned to Philadelphia before the Sixers waived him in March 1987.  He caught on with the Miami Tropics, whom he led to the USBL title that summer.  Free was named 1987 USBL Man of the Year, then joined the Houston Rockets for his final NBA season, finishing his career with nearly 18,000 points.  Currently, World B. Free is a community ambassador for the Philadelphia 76ers.

In 1997, World B. Free was inducted into the New York City Basketball Hall of Fame, joining the likes of Lew Alcindor, Connie Hawkins, Tiny Archibald and Billy Cunningham.