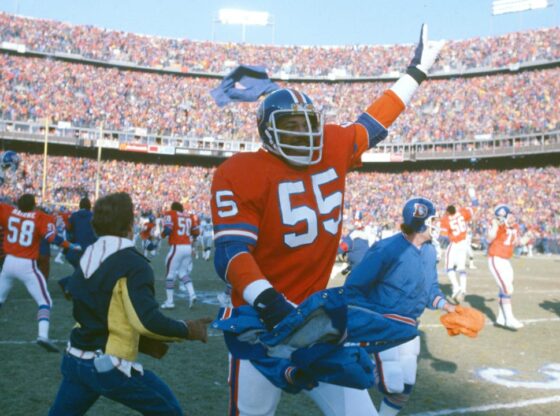 At the heart of every great defense lies a solid linebacking corps.  Rangy, athletic players who are fast and nimble enough to cover running backs and drop into coverage, yet physical enough to take on offensive lineman and stop the run.  Today we take a look at the top ten linebacking groups in pro football history.

The 1977 Denver Broncos played a 3-4 defense.  Bob Swenson and Tom Jackson were outside, while Randy Gradishar and Joe Rizzo filled the inside.  Gradishar and Jackson were First-Team All-Pro, and the entire unit intercepted 11 passes.  The quartet formed the backbone of the Orange Crush defense that led the Broncos to a 12-2 record and their first Super Bowl appearance.

The 1966 Dallas Cowboys featured the franchise’s first iteration of the Doomsday Defense.  Speedy weakside linebacker Chuck Howley played in six Pro Bowls and is the only player from the losing team ever named Super Bowl MVP.  Five-time Pro Bowler and 1973 Defensive Player of the Year, Lee Roy Jordan, manned the middle.  Both Howley and Jordan are members of the Cowboys Ring of Honor.  The underrated Dave Edwards, who missed only one game in a dozen NFL seasons while starting 135 games, played strongside linebacker.  The trio helped Dallas defeat the Miami Dolphins in Super Bowl VI.

The 1971 Baltimore Colts only allowed an average of ten points per game.  Hall of Famer Ted “Mad Stork” Hendricks is one of the greatest outside ‘backers ever to play the game.  Playing in an era that featured Dick Butkus, Ray Nitschke, Tommy Nobis and Willie Lanier, the ornery Mike Curtis was considered one of the best middle linebackers in the league.  At 6’1” and 230 pounds, outside linebacker Ray May could cover like a corner and hit like a defensive end, rounding out the Colts’ terrific trio.

The 2000 Baltimore Ravens set the NFL record for fewest points allowed in a season [165] and fewest rushing yards allowed in a 16-game season [970].  Corner linebacker and 1997 Defensive Rookie of the Year, Peter Boulware, led the AFC in sacks in 2001.  On the other side was Jamie Sharper, who led the NFL in tackles in 2003 and made a crucial interception that sent Baltimore to Super Bowl XXXV.  Ray Lewis is one of the greatest ever to play middle linebacker.  A 13-time Pro Bowler, Lewis was named Defensive Player of the Year and Super Bowl MVP in the 2000 season.  Too bad this team was so unlikable.

The 1967 Green Bay Packers’ linebacking trio was led by Ray Nitschke, the man in the middle and heart and soul of Vince Lombardi’s defense.  The great Dave Robinson flanked the strongside, and Lee Roy Caffey lined up at weakside ‘backer.  This group was the key to one of the NFL’s great dynasties and helped lead the Pack to three straight league championships.

The finest linebacking group ever to set up in a 3-4 alignment belonged to the 1992 New Orleans Saints.  Dubbed the Soul Patrol, the quartet combined for 18 trips to the Pro Bowl and made ten First-Team All-Pro appearances.  Ricky Jackson landed in the Pro Football Hall of Fame, Pat Swilling and Sam Mills are College Hall of Famers, and Vaughn Johnson was just plain nasty.  The 1992 season was the only time in history that four linebackers from one team made the Pro Bowl together.

The 1985 Chicago Bears featured the best defense in pro football history.  Buddy Ryan’s “46” defense was so aggressive – so impenetrable – that Chicago often opted to kick off after winning the coin flip to release the Junkyard Dogs on their overwhelmed opponents.  The linebacking trio was made up of Hall of Famer Mike Singletary in the middle, with Pro Bowlers Otis Wilson and Wilbur Marshall on the outside.  Fast, athletic and physically imposing, this group helped hold opponents to a meager ten points in the three postseason games that capped off Chicago’s Super Bowl-winning season.

The 1969 Kansas City Chiefs were most famously known for their innovative Offense of the 70s.  What is lost on many is just how stellar their defensive unit was.  The group featured six Hall of Famers, two of whom where Willie Lanier and the great Bobby Bell.  Coach Hank Stram called Bell the finest athlete he ever coached.  Lanier – who celebrates his 74th birthday today – was a human battering ram.  The unheralded Jim Lynch rounded out the trio that helped dismantle the Minnesota Vikings in Super Bowl IV.

While the ’85 Bears boasted the finest defense of all time, the 1975 Pittsburgh Steelers featured the greatest corps of linebackers ever assembled.  The Steel Curtain defense had no weaknesses and the ‘backers were stellar.  Jack Lambert was the first great middle linebacker who covered like a DB.  Jack Ham was 1975 NFL Defensive Player of the Year and is one of the best outside linebackers in history.  Opposite Ham was Andy Russell, a seven-time Pro Bowler and member of the Steelers All-Time Team.  Collectively, this tremendous trio was named First-Team All-Pro 13 times in nine years.