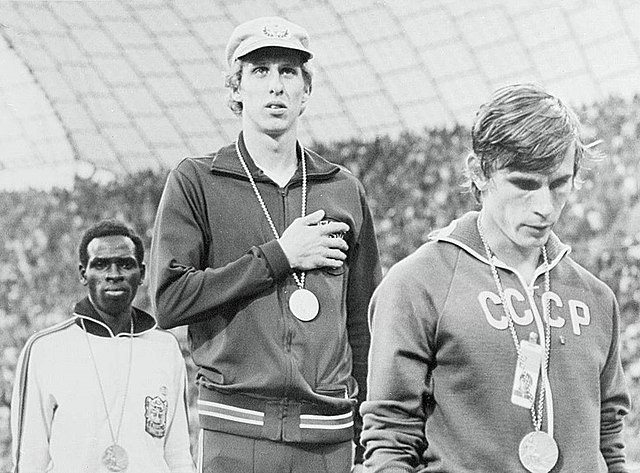 Dave Wottle put on one of the greatest performances in Olympic track history.

Shy and unassuming, Wottle provided a feel-good moment at the 1972 Munich Olympics.  In a Games marred by the terrorist attacks that became known as the Munich Massacre, Wottle thrilled the nation by capturing a gold medal in the 800 meters.  Wearing a golf cap, Wottle displayed a gold-medal finishing kick – the Wottle Throttle – to overtake the favored Soviet, Evgeni Arzhanov, by less than the bill of his cap.

The Soviet had not lost an 800-meter race in four years.  Running against a world-class field on a September day in Munich’s Olympic Stadium, Wottle was ten yards behind the next-to-last runner after 200 meters.  He was so far out of contention that he disappeared from the television screen, and the announcer wondered if the American was “seriously injured.”

Wottle’s victory came on the heels of several U.S. track embarrassments at the ’72 Games.  Two co-world-record holders failed to show up in time for the start of the 100 meters, while pole vaulting gold medal favorite Bob Seagram was banished for using an illegal pole.  Following the Games, Sports Illustrated ran a headline stating the nation was “Saved By A Very Fast Wottle.”

A miler who happened to be really good over two laps, Wottle’s path to Olympic glory was an improbable one.  In the spring of his junior year at Bowling Green, he won the 1,500 meters at the 1972 NCAA Championships.  Two weeks later, he claimed the AAU 800-meter title.

A lanky ROTC student sporting a white hat, Wottle entered the 800 at the Olympic Trials in July 1972 only as a speed workout for his signature event, the 1,500. “Heck, I wouldn’t run the 800 at Munich even if I made it,” he said before the trials.  Running at the University of Oregon’s historic Hayward Field, Wottle earned a spot on the Olympic team after running the 800 in 1:44.3, tying the world record.  He also qualified in the 1,500.

Against the wishes of legendary Olympic track coach Bill Bowerman, Wottle got married six days after the trials, and honeymooned at the pre-Olympic training camp in Maine.  Trying to prove himself to Bowerman, he went too hard too fast in camp and developed tendonitis in his knees.  The injury interrupted his training, forcing the Ohioan to cut his mileage in half, and Wottle came into the Munich Games unsure of his fitness level.

Wottle began the bell lap of the 800 meter in last place.  He started passing runners with 300 meters to go, hoping to put himself into position to employ his amazing finishing kick.  While Wottle maintained even splits over the two-lap race, the field – which had gone out too fast – receded.  ABC announcer Jim McKay, his voice rising, called the final 75 meters in near-disbelief.  “He’s got one Kenyan…He’s got the other Kenyan…Can he make it?…I think he did it!…I think Dave Wottle won the gold medal!

After the race, Wottle – who captured gold by .03 seconds — was stunned and euphoric.  He was so surprised to win, he forgot to take his hat off on the medal stand during the national anthem.  Interpreted by many as a form of protest, Wottle was roundly criticized.  The humble Midwesterner apologized profusely in the press conference afterward, and later received a telegram from Vice President Spiro Agnew that read, “Hats on or off, you are the type of American I respect.”

Born in Canton, Ohio, on this date in 1950, David James Wottle grew up only a few blocks from the Pro Football Hall of Fame.  Thin and feeble as a youngster, his family doctor advised him to take up running to strengthen himself.  Wottle listened, and earned a track scholarship to Bowling Green University.  The 6-foot, 140-pound freshman finished second to Marty Liquori in the 1,500 at the 1970 NCAA Championships.  Hampered by injuries in 1971, he returned to capture the title in 1972.  He finished his college career by claiming the indoor and outdoor mile titles, running the latter in an NCAA-record 3:57.1.

Wottle turned professional in 1974 but retired from running the following year.  Although he was eliminated in the semifinals of the 1,500 meters in Munich, his 800-meter Olympic performance cemented his legacy.  “Not a day goes by where I’m not reminded of that race,” said Wottle.  It remains one of the indelible moments in Olympic history and changed Dave Wottle’s life forever.

He coached college track from 1975 to 1981, then served as Dean of Admissions at Rhodes College in Memphis until his retirement in 2012.  He wore his signature golf cap for practical reasons.  “It was a sun visor, a sweatband and it kept the hair out of my eyes,” Wottle explained.  The hat he wore in Munich beat him into the U.S. Track & Field Hall of Fame by three years.  The cap went in 1977, while Mr. Wottle was not inducted until 1980.

Father of three grown children, Wottle now lives in suburban Memphis with his wife, Jan.  Happy 68th birthday to one of the finest middle distance runners in American track history.