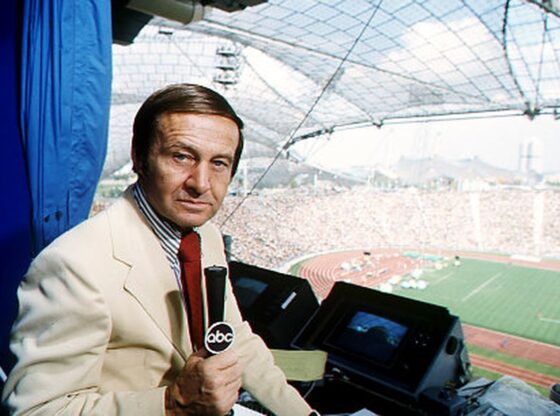 For more than four decades, Jim McKay was one of the most recognizable faces on American television.

The personification of class and style, McKay was the founding father of sports television, one of the most respected commentators in the history of broadcasting and journalism.  A pioneer in American television sports coverage, he was the sagacious and personable host of 12 Olympic Games. McKay also anchored TV coverage of the Indianapolis 500 for many years as well as numerous Triple Crown horse races and professional golf tournaments.

In 1961, McKay got a call from the legendary Roone Arledge about hosting what was supposed to be a one-time summer replacement.  It ended up revolutionizing TV sports.

McKay hosted the influential ABC’s Wide World of Sports for 25 years, starting in 1961.  The ground-breaking show provided an international reach long before exotic backdrops became a staple of sports television.  McKay brought obscure sports into American living rooms, including barrel jumping, cliff diving, and demolition derbies.  He provided the famous voice-over that accompanied the WWOS opening, in which viewers were reminded of the show’s mission: “Spanning the globe to bring you the constant variety of sport.” The intro closed with McKay’s dramatic words that punctuated every Saturday afternoon: “The thrill of victory…and the agony of defeat.”

McKay was a pioneer in American television sports coverage.  His first TV broadcast assignment was a horse race at Pimlico in 1947.  In 1968, he became the first TV sports commentator to win an Emmy [one of 13 earned during his brilliant career, including a 1990 award for Lifetime Achievement].  He was “the most respected and admired sportscaster of his generation,” according to Dick Ebersol, who worked with McKay for six years at ABC Sports.  Understated, dignified and with a keen eye for detail, McKay set the standard for sports journalism.

Born in Philadelphia on this date in 1921, James Kenneth McManus moved with his family to Baltimore at 15.  He earned a bachelor’s degree from Loyola College in Maryland in 1943, then served in the U.S. Navy for three years as the captain of a minesweeper during World War II.  Following his discharge from the Navy in 1946, McKay returned to Baltimore to work as a reporter for The Evening Sun newspaper.  The following year he joined WMAR-TV where he
became the first voice ever heard on television in Baltimore.  In addition to his on-air duties, McKay served as the station’s chief writer, director, and producer.

Arthur Godfrey once told me, “You’re talking to one camera and one person.” So I always talk to my wife, Margaret.

In 1950, McKay moved to New York to do a show on CBS called The Real McKay, which necessitated the changing of his on-air surname.  Throughout the decade, sports commentary became his focus for CBS.  In 1956-57, McKay called New York Giants football with Chris Schenkel.  He covered the first televised Masters [1956] and Summer Olympics [Rome, 1960].  The Rome Games was the first of a dozen Olympics McKay covered.  He was an icon, synonymous with the Games and many of their finest moments.

McKay gained international acclaim for his uninterrupted 14-hour coverage of the Israeli hostage crisis during the 1972 Munich Olympics.  At a time when radio and television were the only sources for late-breaking news, the world was tuned to ABC and Jim McKay.  He was the anchor when the events turned grim.  After learning that all eleven members of  the Israeli team had been killed by their Palestinian captors, he stated, with his characteristic simplicity, “They’re all gone.”  McKay later said that sports lost its innocence that day.

“I had to control myself.  I was full of emotion,” McKay recalled.  “But when you’re a professional, it is important to communicate what it is like, to capture the moment.”  McKay, who was in the studio for the United States “Miracle on Ice” men’s hockey victory over the Soviet Union in 1980, said, “In the long run, that’s the most memorable single moment of my career.  I don’t know what else would match that.”

ABC calculated that McKay traveled some 4.5 million miles to work events over the course of his spectacular career.

His work in Munich earned McKay a George Polk Award and two Emmys, for sports and news broadcasting.  In 1987, he was inducted into the American Sportscasters Association Hall of Fame.  The following year, McKay was enshrined into the Olympics Hall of Fame as a special contributor.

As likeable off-camera as on, McKay was a regular guy who wrote like a poet. He earned an Emmy in 1998 for writing the openings of the Indy 500, British Open and Kentucky Derby.  Author of two books, My Wide World and The Real McKay, he was married to the former Margaret Dempsey for 58 years, and the couple adopted two children, a son, and a daughter.  Sean McManus followed his father into television and is currently the chairman of CBS Sports.  In 1993, Mr. McKay and his wife purchased a minority share in the Baltimore Orioles.

An avid horse racing enthusiast, McKay founded Maryland Million Day, a 12-race event aimed at promoting Maryland’s horse breeding industry.  He raised thoroughbreds and considered racing his favorite sport.  On June 7, 2008, Mr. McKay died of natural causes only hours before Big Brown made his unsuccessful bid to win the Triple Crown at the Belmont Stakes.  He was 86.