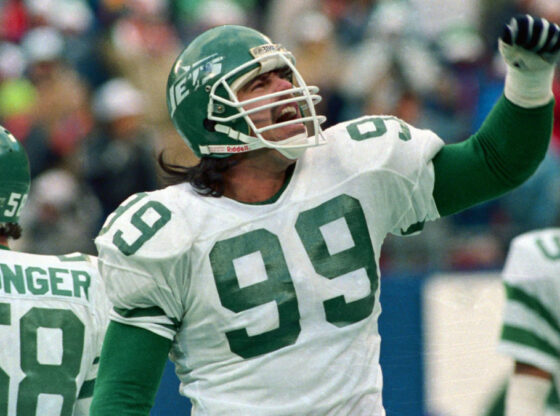 Mark Gastineau took a most circuitous path to NFL stardom.

One of the quickest and most feared pass rushers of his generation, Gastineau played ten seasons, all with the New York Jets.  In 137 NFL games, he collected 74 sacks.  A five-time Pro Bowler, Gastineau twice led the league in sacks and was named First Team All-Pro in three seasons from 1982 to 1984.  The first player ever drafted out of East Central University, Gastineau was twice named NFL Defensive Player of the Year, in 1982 and 1984.

With Joe Klecko, Marty Lyons and Abdul Salaam, Gastineau formed the New York Sack Exchange, the vaunted defensive line that defined the Jets in the post- Joe Namath era.  One of the NFL’s highest-paid and most flamboyant players in the 1980s, he drove a Rolls-Royce, partied with celebrities and made the gossip pages with his engagement to actress Brigitte Nielson.

The attention paid to Gastineau and the Jets’ Sack Exchange pass rush pushed the NFL to begin including sacks in its record book starting in 1982.

A controversial, “me first” self-promoter, Gastineau was a polarizing figure.  He irked teammates by crossing the picket line during the 1987 players strike and was perceived as a “hot dog” on the field.  Gastineau invented the Sack Dance.  After swatting the opposing quarterback to the turf, he’d stand over him, raising his right hand in triumph while dancing in a small circle as if killer bees were nesting in his hip pocket.  His peers’ level of resentment was so high that Gastineau wasn’t voted by the players to a starting spot in the 1983 Pro Bowl despite leading the league in sacks.

Gastineau caused a near riot in Shea Stadium in October 1983.  He broke out his dance after sacking Los Angeles Rams’ quarterback Vince Ferragamo, prompting Rams offensive tackle Jackie Slater to shove Gastineau from behind.  The ensuing brawl resulted in 37 players being fined a total of $15,750.  The fight cost the Jets’ star defensive end $1,000.

Born in Ardmore, Oklahoma, November 20, 1956, Mark Dell Gastineau grew up in a family of rodeo cowboys.  His grandfather, Red, was still winning events at 70 and his father, Ernie, was a champion calf roper.  At seven, he moved with his family to a ranch in Springerville, a small town in the White Mountains of Arizona.  Ernie built a rodeo ring, and he and young Mark began competing in team roping events when the boy was 12.  Mark would “head” while his 240-pound father would “heel.”  Gastineau attended tiny Round Valley High School in Eager, where he gave up a promising rodeo career to play football.

As a child, Gastineau suffered a leg break so horrific he was told he’d never walk again.

After garnering no interest from major colleges, Gastineau enrolled at Eastern Arizona Junior College in 1975.  He earned All-American honors in his first season, then transferred to Arizona State.  Gastineau left after one year because of run-ins with Sun Devils head coach Frank Kush.  He landed at East Central University in Ada, Oklahoma, an NAIA school that had never produced an NFL draft pick.  “After I signed the scholarship, I was walking across the campus crying,” recalled Gastineau, “because I knew my pro ambitions were probably down the drain.”

Gastineau was invited to the 1979 Senior Bowl, a showcase for college all-stars.  He played for the North squad, which was led by New York Jets head coach Walt Michaels.  After being named Outstanding Defensive Lineman for the North, Gastineau, who came into the Senior Bowl as a projected ninth-rounder, saw his draft stock rise significantly.  Michaels loved his size, speed and quickness, and the Jets took the talented defensive end in the second round of the 1979 NFL draft.  New York selected Alabama’s Marty Lyons, who had been named Outstanding Defensive Lineman for the South squad at the ’79 Senior Bowl, with their first pick.

Mark Gastineau was a freak of nature.  At 6’5” and 270 pounds, he could bulldoze opposing lineman.  But his strength was his speed.  Gastineau ran a 4.56 40-yard dash, perhaps the fastest ever for an NFL lineman.  Sporting a flowing black mane, he wore gold: an earring in the shape of a thunderbolt striking a fist, as well as a chain around his neck.  Gastineau’s chiseled physique, carved during off-season training sessions at L.A’s famed Venice Beach, looked more like a bodybuilder’s than that of a defensive end [he starred as Markan the Barbarian in a famous ‘80s poster].

Gastineau’s signature shimmy was gaudy.  It was excessive.  It was in your face, and it led to fights.  And his dance, in part, led the league to outlaw them.  In March 1984, the NFL implemented a change, dubbed the Gastineau Rule.  Rule 12, Section 2, Article 14 stated there would be no “prolonged, excessive, or premeditated celebration by individual players or groups of players.”  The No Fun League began recognizing the quarterback sack in 1982, when sack stats were first recorded.  Two years later, players were banned from celebrating them.

“One lousy tackle and he puts on a big act.  Why don’t I dance every time I block him out?,” said future Hall-of-Famer Jackie Slater of Gastineau’s antics

An under-the-radar prospect, the Jets stole Gastineau with the 41st overall pick of the 1979 draft.  In his second year, he became a starter and led the team in sacks.  Gastineau quickly became the most unblockable defensive lineman in the game.  He set the single season NFL sacks record in 1983, then broke his own mark the following year.  The 22 sacks Gastineau recorded in 1984 remained an NFL record for 17 years, when Michael Strahan collected 22.5 for the Giants in 2001.

Following his record-setting season in 1984, Gastineau signed the biggest contract in history for a defensive player when he inked a five-year, $4 million deal with the Jets.  With off-field earnings in excess of $200,000 per year, the flashy pass rusher became one of the biggest superstars in sports.  Gastineau led the AFC in sacks seven weeks into the 1988 season, then abruptly announced his retirement from football to support his fiancée, Brigitte Nielson, who was allegedly suffering from uterine cancer.  At the time of his retirement, Number 99 was the NFL’s all-time sacks leader.

Gastineau returned to football in 1990.  His comeback was short-lived, however, when the B.C. Lions released him four games into the CFL season.  Markan the Barbarian began a career in boxing in 1991.  He fought professionally for five years, going 15-2-1 in 18 career bouts.  Gastineau’s ring career ended in 1996 when he lost to former NFL fullback Alonzo Highsmith.

Once larger than life, Gastineau now finds his life threatened by insidious brain diseases.  He has been diagnosed with dementia, Alzheimer’s and Parkinson’s. likely the result of his years playing football.

Once the scourge of quarterbacks throughout the NFL, Mark Gastineau has dealt with a host of off-field legal issues.  In 1984, he was convicted of assaulting a patron at Studio 54, a fast-lane Manhattan nightclub.  After losing an arm-wrestling competition with a 175-pound bartender in the wee hours of a September 1983 morning, Gastineau became so enraged he sent an innocent bystander to the hospital with a fractured nose.  In 1991, the former All-Pro was sentenced to three years’ probation for illegal possession of amphetamines.  Following a guilty plea to misdemeanor assault after hitting his estranged wife in 1998, Gastineau was ordered to spend a year in an anger management treatment center in the Bronx.  He left after four months, then was sentenced to 18 months in jail for failing to complete the course.

Ranked by NFL Network as the eighth-greatest pass rusher in league history, Mark Gastineau remains the New York Jets all-time leader in career, single-season and single-game sacks. His two career fumble-return-for-touchdown also remains a franchise mark.  He was elected to the Jets All-Time Four Decade Team in 2003, and was inducted into the club’s Ring of Honor in 2012.  Mr. Gastineau, who will turn 63 this November, lives a quiet life.  He’s married and lives in central New Jersey.  The former wild boy is now a choir boy, as Gastineau is a member of Times Square Church in Manhattan, where he is part of the music ministry.