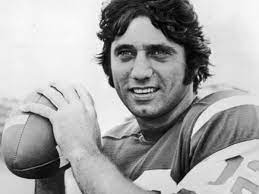 Born in the western Pennsylvania mining town of Beaver Falls on this date in 1943, Joseph William Namath was the youngest of four sons born to parents of Hungarian descent.  Namath grew up in the Lower End neighborhood, a largely African-American community 30 miles northwest of Pittsburgh.  He was a three-sport star at Beaver Falls High School, quarterbacking the Fighting Tigers to the 1960 Class AA state championship and dunking basketballs as a 6’2” point guard.  After receiving offers from several major league baseball teams, including a $ 50,000 signing bonus from the Chicago Cubs, Namath honored his mother’s wishes and went to college.  He was rejected by Maryland due to low test scores and enrolled at Alabama to play for legendary coach Paul “Bear” Bryant.  As a sophomore, he led the Crimson Tide to a 10-1 record.  The following year, he broke curfew and Bryant—who called Namath “the greatest athlete I ever coached”—suspended his star quarterback for the last regular season game as well as the Sugar Bowl.  In his senior season, Namath led the Tide to a national championship despite suffering three separate knee injuries.  In three seasons in Tuscaloosa, Mr. Namath led ‘Bama to a 29-4 record before leaving midway through his senior year to pursue a career in professional football.

On November 28, 1964, Joe Namath was selected by the St. Louis Cardinals with the 12th overall pick of the NFL Draft, a dozen spots behind Auburn’s Tucker Frederickson.  That same day, the New York Jets selected him with the first overall pick in the AFL Draft.  Namath chose the Big Apple, signing a three year contract worth a record $ 427,000—and a Lincoln Continental—the day after the Orange Bowl.  In July, he appeared on the cover of Sports Illustrated, prompting Sherman Plunkett, the Jets’ 300-pound offensive tackle, to dub him “Broadway Joe.”  After earning the starting quarterback role early in the season, Namath went on to be named 1965 AFL Rookie of the Year.  Two seasons later, he became the first quarterback to pass for over 4,000 yards in a season.  In the 1968 AFL title game, Namath threw three touchdown passes to lead the Jets to a come-from-behind victory over the defending champion Oakland Raiders, sending New York to the Super Bowl.  On January 12, 1969, Broadway Joe cemented his legacy.  The Jets were a three-touchdown underdog to the mighty Baltimore Colts in Super Bowl III, yet Namath directed New York to four scoring drives while passing for over 200 yards with no interceptions, earning the Jets a 16-7 victory and validating the American Football League.  He was named Player of the Year, Super Bowl MVP and was awarded the Hickok Belt as professional athlete of the year.

Six months later, the most famous athlete in America retired.  Following the Super Bowl, Namath became part owner of Bachelors III, a bar/nightclub on Manhattan’s Upper East Side.  Upon learning the establishment was a known hangout for gamblers and mobsters, NFL Commissioner Pete Rozelle [Daily Dose, March 1] ordered Namath to relinquish his interest or face suspension.  The 26-year old quarterback refused, choosing to retire.  In July, Namath realized he had acted too harshly and returned to the Jets.  In September 1970, “Joe Willie” played in Monday Night Football’s inaugural game [Daily Dose, July 8].  After not missing a single game due to injury in his first five years in the league, between 1970 and 1973, Namath played in just 28 of 58 possible games due to injuries.  In the twilight of his career, Mr. Namath was waived by the Jets, playing his final year with the Los Angeles Rams before retiring after the 1977 season.

Joe Willie Namath was one of the most exciting, publicized and proficient quarterbacks ever to play the game.  His signing with the New York Jets was the biggest victory in the AFL’s war with the NFL, bringing instant credibility to the upstart league.  Namath’s signature moment came in the most important game in pro football history—Super Bowl III—forcing a merger between two conglomerates.  New York Jets owner Sonny Werblin was Chairman of Madison Square Gardens [Daily Dose, December 15] and president of M.C.A.’s television division.  He recognized Namath’s talents, signing him to the richest contract of all time.  “Namath has the presence of a star.  You know how a real star lights up the room when he comes in?  Joe has that ability.”  The contract was a bargain, as Namath became the most important player in AFL history.  America was in social upheaval in the 1960s, and the shaggy-haired, mustachioed Joe Willie came along at the perfect time.  He wore white shoes, fur coats and was anti-establishment.  Namath was ideal for New York City and Werblin helped make Broadway Joe a star.  His road roommate said being with Namath was like traveling with a Beatle.  Namath was admired by men and adored by women, famously stating, “I like my Johnny Walker red and my women blonde.”  Nobody threw the football quite like Joe Namath—only Dan Marino comes to mind—and no other athlete epitomized “cool” like Joe Willie did.  Hindered by gimpy knees and numerous surgeries, his career statistics are underwhelming.  Only once did the throw for more than 20 touchdowns in a season, only once did he throw more touchdown passes than interceptions in a season, and he was 68-71 in 13 seasons as a starting quarterback.  Namath threw 173 touchdown passes and 220 interceptions in 143 career games and had only three winning seasons in 12 years with the Jets.  Nonetheless, he was an icon, paving the way for the modern quarterback position.  Bill Walsh, who won three Super Bowls as coach of the San Francisco 49ers, said Namath was “the most beautiful, accurate, stylish passer with the quickest release I’ve ever seen.”  Don Shula [Daily Dose, ] said that Namath was “one of the three smartest quarterbacks of all time.”  Joe Namath is the only quarterback in pro football history to pass for over 4,000 yards in a 14-game season.  In 1985, he was inducted to the Pro Football Hall of Fame.

“He was a guy that came along and broke a lot of conventions.  He was like a rebel with a cause.  It was like traveling with a rock star.  He was just a magnet.  He’s attracting people.  And mostly young people.  And talk about excitement and energy.  Wow!
– Former teammate John Dockery