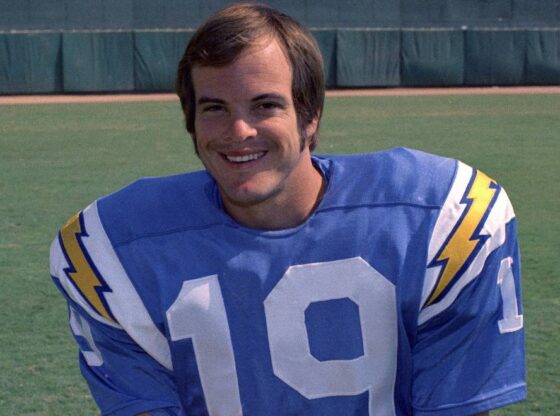 Lance Dwight Alworth is the only player in pro football history to be elected to both the AFL and NFL All-Time Teams.

Born in Houston, Texas, August 3, 1940, his mother taught school and his father worked as an oilfield construction executive for Humble Oil. The family moved to Hog Chain, Mississippi—a railroad town near the Gulf Coast—when Lance and his sister were children. Alworth attended Brookhaven [broo-KAY-ven] High School—alma mater of Earsell Mackbee, who Otis Taylor juked along the sidelines while scoring the touchdown that sealed Super Bowl IV for the Kansas City Chiefs. At Brookhaven, Alworth was a standout baseball, basketball and football player, earning 15 varsity letters. He also competed in sprints and long jump for the Panthers’ track team. Upon graduation, the Pittsburgh Pirates and New York Yankees offered Alworth baseball contracts, but his father persuaded him to get a college education. Having married in high school, Alworth could not attend the University of Mississippi-who did not allow married players—and accepted a scholarship from legendary coach Frank Broyles to the University of Arkansas. Alworth played running back, defensive back and returned kicks for the Razorbacks, leading the nation in punt return yardage in 1960 and 1961. He was also a track star, running the 100 and 200-yard dashes in 9.6 and 21.2 seconds, respectively. A marketing major, he was a three-time Academic All-American while also being named to the AP, UPI and Coaches All-American teams as a senior in 1961.

In 1962, Lance Alworth was drafted by the San Francisco 49ers with the eighth overall pick of the NFL Draft. The Oakland Raiders selected him with the ninth overall pick in the AFL Draft, then traded his rights to the San Diego Chargers in exchange for three players. Following a bidding war between the rival leagues, Chargers’ assistant coach Al Davis convinced Alworth to sign with San Diego. “Lance Alworth was one of maybe three players in my lifetime who had what I would call “it.” You could see right from the start that he was going to be a superstar.” After being moved from running back to flanker, the baby-faced Alworth—who could run like a deer—was nicknamed “Bambi” by a teammate.

Offensive football in the 1960s was very different from the game played today. Defenses had more freedom. Pass rushers used the head slap to stun offensive lineman and knock them off balance [ Daily Dose, December 9], while pass defenders were allowed to bump and shove receivers over the entire field, not just within the five-yard zone of today’s game. Pass blockers were not allowed to use their hands or extend their arms, making their task difficult while giving quarterbacks little time to throw. Hash marks were wider, creating a “short side” of the field that allowed defenses to concentrate on the wide side. It was difficult for receivers to get open and defensive penalties were rarely called, making pro football a run-first, pass-second, game. San Diego Chargers head coach Sid Gillman [Daily Dose, April 1] changed that. Gillman is the father of the modern passing game, an innovator who created the West Coast Offense that is today’s standard. Gillman insisted on stretching defenses by throwing deep downfield passes. Lance Alworth was the perfect player for Gillman’s system. In his first full season, Bambi caught 61 passes for 1,205 yards while leading the Chargers to the AFL title, the only championship in franchise history. Alworth was named league MVP and All-AFL, the first of seven straight seasons in which he would earn that honor. He caught a pass in every AFL game he played—96 straight—and led the league in receiving three times. Alworth was Chargers’ quarterback John Hadl’s favorite target and the two teamed up for 81 touchdown passes–one of the best tandems in pro football history. Alworth held records for most consecutive games with a reception [96], most consecutive seasons with over 1,000 receiving yards, was the only receiver to average more than 100 yards a game in three straight seasons. He still owns the record for most 200-yard games [5]. In 1971, he was traded to the Dallas Cowboys, where he scored the opening touchdown in Super Bowl VI to help Dallas to their first NFL title. Mr. Alworth retired following the 1972 season.

Lance Alworth was voted to the All-AFL team, ahead of Fred Biletnikoff [Daily Dose, February 23], Otis Taylor and Charley Hennigan, some of the finest receivers ever to play the game. He is also a member of the NFL 75th Anniversary All-Time team, making him the only player in pro football history to accomplish that feat. Bambi is the greatest San Diego Charger ever to wear the Lightning Bolt and the team retired his number in 2005. His speed, gracefulness and moves were unprecedented. In nine seasons in San Diego, Alworth averaged 50 catches and 1,000 yards each year. Mr. Alworth is a member of the University of Arkansas’ All-Century Team, the Chargers All-Time Team and has been inducted into the College Football, Pro Football, Southwest Conference, Arkansas and Mississippi Halls of Fame.

Writer’s personal note. My father took me to see my first professional football game in the autumn of 1968, at Municipal Stadium in Kansas City. The Chiefs were hosting the Chargers on a sunny afternoon, and I was so excited that I did not sleep the night before. I will never forget two images I saw upon entering the stadium that day. First was the grass; double-cut, painted with perfect white chalk lines and accented with Chiefs’ red-and-yellow. It was perfect and a shade of green I had never seen before. The second image was of Lance Alworth warming up in his crisp white jersey—accented in powder blue—wearing bright yellow pants with lightning bolts charging up both sides. Bambi was working with a contraption I had never seen before [I later learned it was a resistance band], with one end tied around his waist and the other around the goal post. He was running sprints on the immaculate field. The Chiefs won that day, which made me happy. Better yet, I got a chance to see the best receiver in pro football. To this day, when I think of my favorite athletes—in any sport, of any era—I think of Lance Alworth wearing a one-bar face mask with Number 19 on the side of his helmet, perfecting his craft.

“A player comes along once in a lifetime who alone is worth the price of admission. Lance Alworth was that player.”