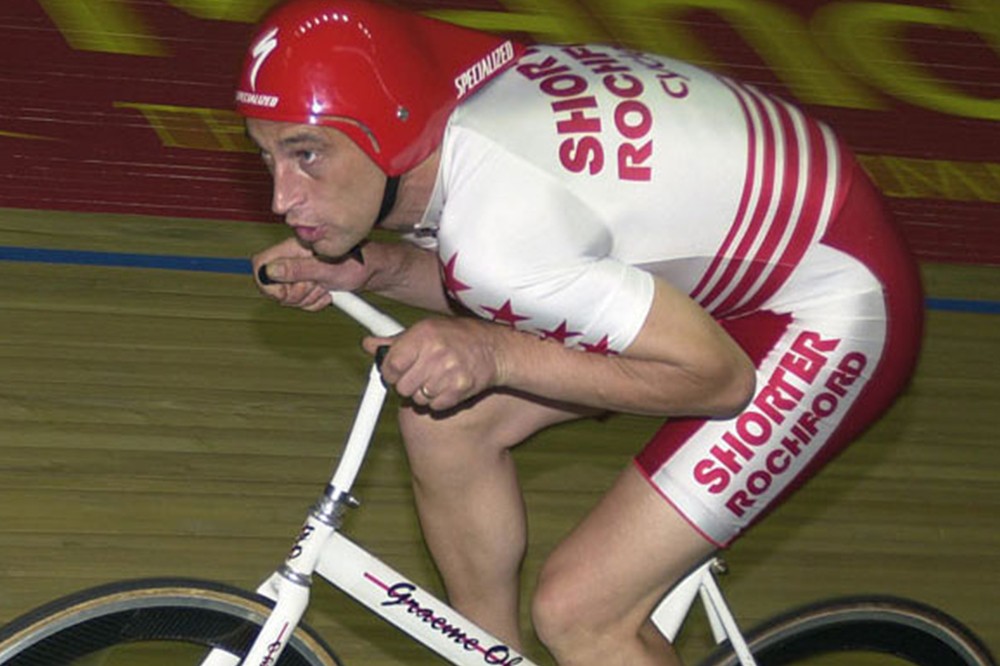 The Flying Scotsman is one of the most unorthodox athletes in the history of cycling.

Graeme Obree was born in Nuneaton, a small town in the West Midlands region of England, on September 11, 1965. His father was a policeman—firm and distant—and moved the family to Scotland when Graeme was young. He was bullied, had few friends and never felt he belonged, so he turned to cycling as a way to escape. “I had this idea that one day I would go out for a ride, cycle over the horizon and just disappear. The trouble was the horizon never came.” In his late teens, he attempted suicide and was saved by his father who returned home early from work. Later, a team of doctors diagnosed Obree with bipolar disorder. By the early 1990s, he was married, had two sons and a failing bike shop. Obree, who always felt better on a bike, decided he needed to take on the most prestigious record in cycling—The Hour.

The Hour Record is the record for the longest distance cycled in one hour on a bicycle from a stationary start. Cyclists attempt this record alone on the track without other competitors present. Attempts are made in a velodrome—a steeply banked oval arena consisting of two 180-degree circular bends connected by two straights—and governed by the Union Cyclist Internationale [UCI]. The first officially recognized record was set by Henri Desgrange in 1893 in Paris [35.325 km]. The record was bettered 25 times over the next 80 years by both amateurs and well-known professionals. Eddy Merckx [Daily Dose, July 21], the greatest cyclist of all time, set a new Hour record in 1972 in “the hardest ride I have ever done.” In 1984, Italian Francesco Moser rode 51.151 km to break the mark. Graeme Obree obsessed about The Hour. “The record had fascinated me since Moser broke it. It was the ultimate test—no traffic, one man in a velodrome against the clock. I didn’t tell myself I will attempt the record, I said I would break it.” Obree built a bike that he affectionately dubbed “Old Faithful,” using spare washing machine parts, with flat handlebars that placed his arms squeezed against his sides, his chest almost touching his hands and his head far forward.

In July 1993, training on a diet of marmalade sandwiches, obscure and with an empty bank account, Obree brought Old Faithful to Hamar Velodrome in Norway—home of the 1992 Winter Games—for the assault on Moser’s record. “My scalp went numb. I couldn’t feel my lips—all simply through lack of oxygen.” Obree’s attempt failed by nearly a kilometer, but he had booked Hamar for 24 hours and decided to come back the next day for another attempt. On July 17, in front of nine people in a Winter Olympics stadium, Graeme Obree set a new record of 51.596 km. “I was Butch Cassidy in terms of swagger. I didn’t want any negativity…the day before, I had been a mouse. Now I was a lion.” One week later, British Olympic champion Chris Boardman broke the mark in Bordeaux, France. In April 1994, after making modifications to Old Faithful, Obree arrived at the same track in Bordeaux to challenge Boardman’s record. After bolting his shoes to his pedals, he rode 52.713 km to establish a new record for The Hour. It would be short lived, however, as five-time Tour De France champion Miguel Indurain would better the mark five months later.

Graeme Obree was an innovator, an incredible athlete with an indestructible determination. He was an underdog who defied the odds. Fellow cyclist Sir Chris Hoy said, “Graeme is a genius in the true sense of the word. His uncanny ability to tackle problems from an angle that no one else could have thought of makes him a one-off. An original. He sees the world in a different way than us mere mortals.” A maverick bike racer and maker, he was world champion in Individual Pursuit in 1993 and 1995. Obree broke the British 10-mile individual time trial record and won the 50-mile championship in 1993. In 1996 and 1997, Mr. Obree won the British Cycling Federation 25-mile championship. He also had to conquer personal demons, having attempted suicide three times. Mr. Obree considers his greatest accomplishment winning the 1995 world pursuit championship and regrets never riding in the Tour De France, “I would have loved riding in the prologue and I think I would have had a good chance at winning it.” His autobiography, The Flying Scotsman, was published in 2003 and a film by the same name premiered in 2006. In 2009, Graeme Orbee was inducted into the British Cycling Hall of Fame. The following year, he was admitted into the Scottish Sports Hall of Fame.

On this date in 1994, The Flying Scotsman rode 52.713 kilometers to break the world one hour cycling record by .443 km using praying mantis handle bars, round steel tubing frame and carbon tri-spoke wheels.