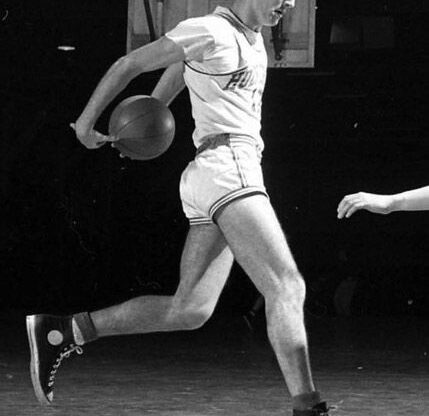 Chuck Taylor may have been the first to understand that a person can be a brand.

A basketball pioneer, Chuck Taylor is the namesake of the best-selling basketball shoe in history – the Chuck Taylor All-Star sneaker.  A player, businessman and ambassador, Taylor invented the basketball clinic, holding the first at North Carolina State in 1923.  It became a standard, and Taylor ran clinics across America for three decades.

He published the Converse Basketball Yearbook, which commemorated the best players, coaches, teams and moments of the sport.  In 1935, Taylor invented the stitch-less basketball, which was easier to control.

Mr. Taylor promoted basketball internationally, helping the game become an Olympic sport in 1936 [featuring white canvas, with red-and-blue lettering, the All-Star was the official shoe of the Olympics from 1936 to 1968].

He served as a fitness consultant for the U.S. military during World War II.  GI’s were soon doing calisthenics wearing Chuck Taylor sneakers, the go-to shoe of the U.S. Armed Forces.

The greatest shoe salesman ever born, Taylor received a salary, but Converse never paid him a dime for any of the 750 million pairs of shoes that have been sold bearing his name.  For years, he drove a white Volkswagen bug across the country, living in motels while selling shoes out of his trunk.  Taylor was, however, quite liberal with his expense account.

Charles Hollis Taylor was born in Azalia, Indiana, about an hour south of Indianapolis.  He attended school in nearby Columbus, an authentic, unique and unspoiled town dubbed “Athens on the Prairie.”

In 1921, Taylor was hired by Converse, a shoe manufacturer that had introduced the All-Star basketball shoe four years earlier.  Taylor started wearing Converse shoes in high school, but they made his feet sore.  He suggested changes to allow the shoe to move with sweaty gym socks and prevent blisters.

By 1924, the company had adopted Taylor’s suggestions to provide enhanced flexibility and support, including adding eyelets for ventilation and a patch to protect the ankle.

Dynamic and energetic, Taylor led a company-sponsored barnstorming team – the Converse All Stars – that played about 30 games a year.  Taylor taught America how to play basketball, holding clinics at schools across the country while pitching the Converse shoe.

In 1932, the All-Star logo, along with Taylor’s name, was added to the ankle patch and the Chuck Taylor All-Star basketball shoe was born.

Taylor quickly became Converse’s most well-known representative.  “It was impossible not to like him,” said Joe Dean, former Converse sales executive who later became athletic director at LSU.  “He knew everybody.  If you were a coach and you wanted to find a job, you called Chuck Taylor.  Athletic directors talked to him all the time when they were looking for a coach.”

Introduced in 1920 as one of the first shoes specifically designed for basketball, the most popular sneaker in history has remained largely unchanged since its introduction.  With a stitched cotton canvas upper portion, a toe cap made of white rubber, and a patented sole of brown rubber, the Chuck Taylor All-Star is the grippiest shoe around.

The high-top version of the shoe was introduced in 1949.  Converse rolled out the first colored canvas All-Stars in 1971.

Initially, Chucks were only available in high or low canvas and in either black or white, and were sold only in sporting goods stores.  Now offered in various materials, including leather, Converse currently carries the “Chuck Family” of over 60 versions of the All-Star.

In the 1960s, All-Stars were being worn by 90 percent of professional and college basketball players.  It has evolved from a shoe for jocks to a kick for hipsters.  Chucks have appeared in television, film and music, and have been worn by everyone from Elvis to the Rolling Stones.

Tree Rollins was the last NBA player to wear canvas Chuck Taylor All-Stars — in 1979 — and Michael Ray Richardson of the Nets wore a red leather version in 1982.

Chuck Taylor retired from Converse in 1967 and was inducted into the Naismith Memorial Basketball Hall of Fame the following year for his contributions to the game.  Mr. Taylor died of a heart attack in Port Charlotte, Florida, one day shy of his 68th birthday, in June 1969.

Like Levi’s and Ford Mustangs, Chucks are iconic – they’ll always be cool.