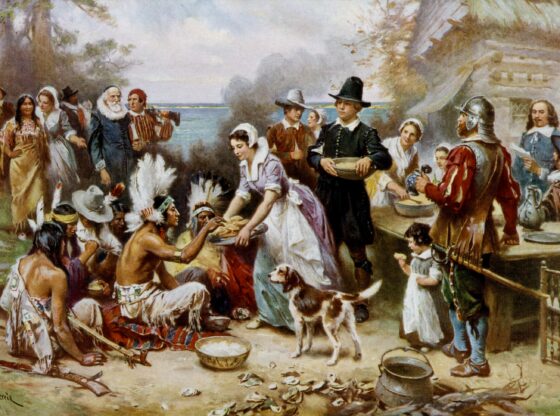 Tomorrow is Thanksgiving — our favorite holiday of the year.

Nothing is better than the fourth Thursday of November.  What originated as a harvest festival has morphed into a tradition-rich day that includes a house filled with family and friends while huddling around the Detroit Lions to share the bird and all the trimmings.

In celebration of the Native Americans’ and Pilgrims’ first gathering in October 1621, we have put together some of our favorite Thanksgiving-ish records.

England’s Paul Kelly is a most talented man, especially when it comes to turkeys.  In June 2009, Kelly battled David Harrison, a professional butcher, in the turkey-carving contest at Little Clayton Farm in Essex.  In an event celebrating the 25th anniversary of KellyBronze turkeys.  Kelly won, dissecting his bird in just under three minutes and 20 seconds to establish a new world record for fastest turkey carving.

Christy Harp and her husband, Nick, have been growing giant pumpkins since 2001.  For Christy, growing gargantuan gourds has been a passion since she was 13.  In 2009, the Ohio high school math teacher grew a world-record 1,725-pound Atlantic giant pumpkin.  At one point during the summer, the sensational squash was gaining 33 pounds per day.

The largest gathering of people dressed like turkeys occurred at the 44th Annual Dallas YMCA Turkey Trot on November 24, 2011, when 661 folks donned gobbler costumes and showed up for a run in Big D.  The Cowboys hosted later in the day, with Tony Romo throwing two touchdown passes to lead Dallas to a 20-19 victory over Miami.

In May 2004, Britain’s Henry Shelford invited five friends to join him for dinner to celebrate Shelford’s 30th birthday.  They were set to dine on the summit of Lhakpa Ri, a 23,113-foot mountain in Tibet, but fierce winds forced them to descend to a more sheltered spot.  The group carried the tables, chairs, and silverware down to 22,326 feet, where they dined on caviar, cheese and wine.  They washed down the world’s highest formal meal with French wine and enjoyed a birthday cake for dessert.

The largest bottle of wine stood 13 feet, eight inches tall was nearly four feet in diameter and contained 817.34 gallons of wine.  The brainchild of Swiss car importer Andre Vogel, the bottle was commissioned and presented in Lyssach, Switzerland in 2014.  It contained a red blend and held the equivalent of 412 standard-sized [750 ml] bottles of wine.

Nothing caps the Thanksgiving Feast better than pumpkin pie.  The largest-ever baked weighed 3,699 pounds and was made at the 2010 Pumpkinfest in New Bremen, Ohio.  The crust was made of 440 sheets of dough and the diameter of the pie was 20 feet, making it the largest on record.

Thanksgiving is about so many wonderful things, not the least of which is family.  In August 2012, the world’s largest family reunion took place in France, when 4,514 members of the Porteau-Boileve family gathered at Saint-Paul-Mont-Penit.  Think they had enough chairs for everyone?

Remember Paul Kelly, the world’s fastest turkey carver?  We told you he was talented.  On November 13, 2008, PK went head-to-head with chef Gordon Ramsey in a turkey pluck.  Our man set a new world record, plucking three birds in 11 minutes 30 seconds.  Meanwhile, it took Ramsey 11 minutes, 32 seconds to clean his trio of turkeys.

Ashrita Furman holds more Guinness World Records than anyone in history [you’ll learn more about Furman when we feature him next month].  One of his marks is consuming the most mashed potatoes in one minute.  In August 2016, the then 61 -year-old health food store manager downed just over two pounds of mashed potatoes in 60 seconds.

We choose stuffing or potatoes over bread rolls as our Turkey Day starch, but that is not the case in [appropriate for Thanksgiving] Turkey.  The Turks love their bread, consuming an average of 440 pounds of it per person per year.   That’s three times more than their body weight annually!

Today is the second-busiest travel day of the year, topped only by Thanksgiving Sunday.  Hartsfield-Jackson Atlanta International Airport is the world’s busiest, hosting nearly 104 million passengers annually.  Wonder what the security line at Hartsfield is looking like today?

Wisconsinites love not only cheese, but it seems they adore gravy as well.  Especially Steven Ruppel.  On April 25, 2018, the Wausau native drank one liter of Campbell’s canned chicken gravy in one minute and 12 seconds.  Ruppel consumed more than four cans of the stuff through a straw, proclaiming, “Gravy is a staple of my diet…I broke this record because I like gravy and usually eat a lot of it.”  Obviously.

From all of us to all of you, have a safe and blessed Thanksgiving!